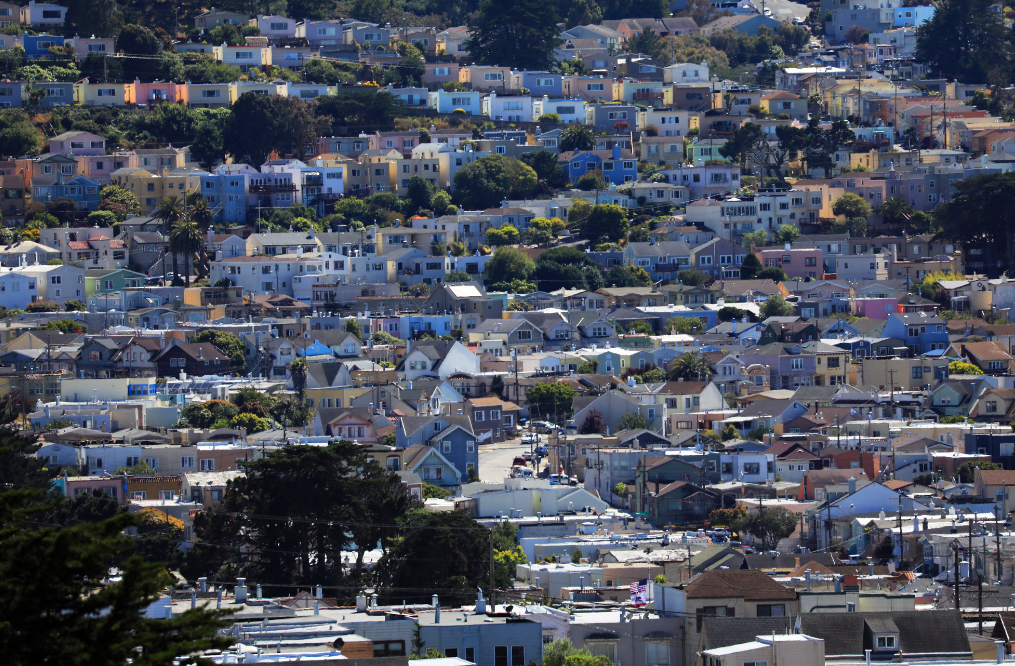 Today’s NY Times talks about the California housing affordability crisis and how the state is considering legislation to make it harder for opponents of developments to create roadblocks to projects that otherwise fit within a locality’s zoning laws. There’s finally a movement of “YMBY’s” That are saying “yes” to greater density – which is really the main issue – because they understand that sprawl is the enemy of the environment in so many ways. In San Francisco, that’s resulting in projects that, for example, don’t require parking for each unit – a recognition that younger buyers are abandoning cars in favor of car-sharing and public transport.

Meanwhile, up in Windsor – an hour and a half away from SF, my 12 unit, architecturally innovative live/work project, complete with solar panels, sits undeveloped on 1.2 acres of land and is required to provide 37 onsite parking spots….

SACRAMENTO — A full-fledged housing crisis has gripped California, marked by a severe lack of affordable homes and apartments for middle-class families. The median cost of a home here is now a staggering $500,000, twice the national cost. Homelessness is surging across the state.

In Los Angeles, booming with construction and signs of prosperity, some people have given up on finding a place and have moved into vans with makeshift kitchens, hidden away in quiet neighborhoods. In Silicon Valley — an international symbol of wealth and technology — lines of parked recreational vehicles are a daily testimony to the challenges of finding an affordable place to call home.

Heather Lile, a nurse who makes $180,000 a year, commutes two hours from her home in Manteca to the San Francisco hospital where she works, 80 miles away. “I make really good money and it’s frustrating to me that I can’t afford to live close to my job,” said Ms. Lile.

The extreme rise in housing costs has emerged as a threat to the state’s future economy and its quality of life. It has pushed the debate over housing to the center of state and local politics, fueling a resurgent rent control movement and the growth of neighborhood “Yes in My Back Yard” organizations, battling long-established neighborhood groups and local elected officials as they demand an end to strict zoning and planning regulations.

Now here in Sacramento, lawmakers are considering extraordinary legislation to, in effect, crack down on communities that have, in their view, systematically delayed or derailed housing construction proposals, often at the behest of local neighborhood groups.

The bill was passed by the Senate last month and is now part of a broad package of housing proposals under negotiation that Gov. Jerry Brown and Democratic legislative leaders announced Monday was likely to be voted on in some form later this summer.

“The explosive costs of housing have spread like wildfire around the state,” said Scott Wiener, a Democratic senator from San Francisco who sponsored the bill. “This is no longer a coastal, elite housing problem. This is a problem in big swaths of the state. It is damaging the economy. It is damaging the environment, as people get pushed into longer commutes.”

For California, this crisis is a price of this state’s economic boom. Tax revenue is up and unemployment is down. But the churning economy has run up against 30 years of resistance to the kind of development experts say is urgently needed. California has always been a desirable place to live and over the decades has gone through periodic spasms of high housing costs, but officials say the combination of a booming economy and the lack of construction of homes and apartments have combined to make this the worst housing crisis here in memory.

Housing prices in Los Angeles, San Francisco, San Jose and San Diego have jumped as much as 75 percent over the past five years.

The bill sponsored by Mr. Wiener, one of 130 housing measures that have been introduced this year, would restrict one of the biggest development tools that communities wield: the ability to use zoning, environmental and procedural laws to thwart projects they deem out of character with their neighborhood.

It is now the subject of negotiations between Mr. Brown and legislative leaders as part of a broader housing package intended to encourage the construction of housing for middle- and lower-income families that is also likely to include the more traditional remedy of direct spending to build more housing units.

This is not the first time this state has sought to prod recalcitrant local governments to build housing. Mr. Brown tried to push through a measure to force communities to build more affordable housing around a year ago. That effort, like most in recent years, faltered in the face of opposition from local officials, homeowners and environmentalists, who often see these kinds of measures as enriching developers while threatening the character of some of the most visually striking parts of this state, along the coast and in the mountains.

“It’s giving developers a great gift and not giving residents and voters a chance to cast their opinions about what happens in their own neighborhood,” Helene Schneider, the mayor of Santa Barbara, said of Mr. Wiener’s new bill.

But the worsening housing crisis here has created a political environment where prospects for a state housing intervention appear more likely than ever.

“There is a consensus that there is a crisis and we have to address it,” said David Chiu, a San Francisco Democrat who leads the Assembly Housing and Community Development Committee. Mr. Wiener compared the political atmosphere now to how Californians embraced mandatory water-rationing in response to the five-year drought here.

“We’re at a breaking point in California,” Mr. Wiener said. “The drought created opportunities to push forward water policy that would have been impossible before. Given the breadth and depth of the housing crisis in many parts of California, it creates opportunities in the Legislature that didn’t exist before.”

The debate is forcing California to consider the forces that have long shaped this state. Many people were drawn here by its natural beauty and the prospect of low-density, open-sky living. They have done what they could to protect that life. That has now run up against a growing generational tide of anger and resentment, from younger people struggling to find an affordable place to live as well as from younger elected officials, such as Mayor Eric M. Garcetti of Los Angeles, who argue that communities have been failing in what they argue is a shared obligation.

For the past several decades, California has had a process that sets a number of housing units, including low-income units, that each city should build over the next several years based on projected growth. Mr. Wiener’s bill targets cities that have lagged on building by allowing developers who propose projects in those places to bypass the various local design and environmental reviews that slow down construction because they can be appealed and litigated for years.

The bill applies only to projects that are already within a city’s plans: If the project were higher or denser than current zoning laws allow, it would still have to go through the City Council. But by taking much of the review power away from local governments, the bill aims to ramp up housing production by making it harder to kill, delay or shrink projects in places that have built the fewest.

It is hard to say exactly which projects might benefit if the various bills were passed, since it’s impossible to know which projects local governments might reject in the future. But there are various examples where it might have pushed a development along.

In Los Gatos, about 60 miles south of San Francisco, for instance, a long-running dispute over a proposed development for 320 homes that the city rejected led to a lawsuit by the developer, which resulted in a judge directing the city to reconsider the plans. Also, cities regularly make developments smaller than their zoning allows, something that gradually chips away at future housing production.

California is the toughest market for first-time home buyers and the cost of housing is beyond reach for almost all of this state’s low-income population. Despite having some of the highest wages in the nation, the state also has the highest adjusted poverty rate.

And Proposition 13, the sweeping voter initiative passed in 1978 that capped property taxes, has made things worse: It had the effect of shrinking the housing stock by encouraging homeowners to hold on to properties to take advantage of the low taxes.

“California is a beautiful place with great weather and a terrific economy,” said Issi Romem, the chief economist with BuildZoom, a San Francisco company that helps homeowners find contractors. “To accommodate all those people you need to build a lot, and the state’s big metro areas haven’t since the early ’70s. To catch up, cities would need to build housing in a way that they haven’t in two generations.”

Coastal cities — which tend to have the worst housing problems — have the most scarce land. Still, economists say, the high cost of all housing is first and foremost the result of a failure to build. The state has added about 311,000 housing units over the past decade, far short of what economists say is needed.

“Cities have proven time and time again that they will not follow their own zoning rules,” said Brian Hanlon, policy director of the San Francisco Yimby Party, a housing advocacy group. “It’s time for the state to strengthen their own laws so that advocates can hold cities accountable.”

Still, few elected officials are eager to risk community anger by forcing through construction that would, say, put a 10-story apartment building at the edge of a neighborhood of single-family homes. That has turned California into a state of isolated and arguably self-interested islands.

The situation has been aggravated by places such as Brisbane, just south of San Francisco, which has encouraged extensive office development while failing to build housing.

“We have cities around California that are happy to welcome thousands of workers in gleaming new tech and innovation campuses, and are turning a blind eye to their housing need,” said Mr. Chiu.

In the Bay Area, the explosive growth of the tech industry has led to escalating rents, opening a tough debate over gentrification and brutal commutes for workers. “Cities that deny housing are contributing to skyrocketing rents, unfair evictions and homelessness,” said Lori Droste, a member of the Berkeley City Council.

The measure has raised considerable opposition as well, including from lawmakers who argued that letting state take power away from local governments strips communities of the ability to control the fundamental character of their own neighborhoods.

“People here feel like this is a special place, like people in any town or city do,” said Chris Coursey, the mayor of Santa Rosa. “And they want decisions about the future of the community to be made by people in the community who they can actually talk to about this.

Richard Bloom, a Democratic state assemblyman and a former mayor of Santa Monica, said even communities like his were no longer reflexively trying to derail housing projects.

“More and more people are becoming well aware that we have a housing affordability crisis on our hands,” he said. “The issue is just reaching critical mass with the Legislature and the public.”

One Reply to “The Cost of a Hot Economy in California: A Severe Housing Crisis”