Now hold on there, matie!  Basic economic theory  says more supply than demand, prices will fall, right?  Well take a look at this graph. It shows the absorption rate of single family home listings from January 2006 through December 2008 plotted against median prices (click to make it bigger): 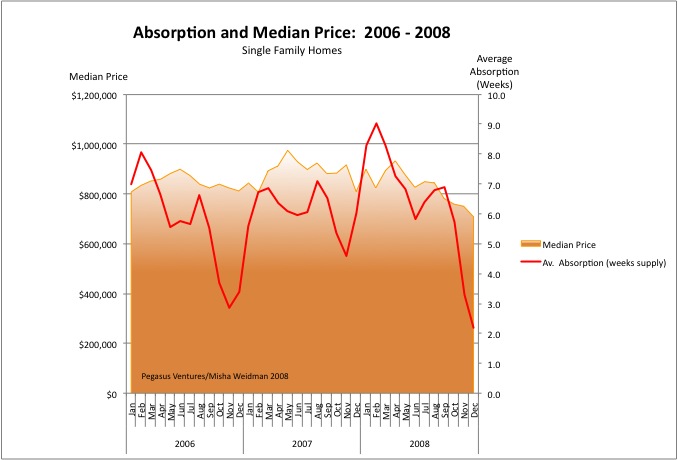 “Absorption” is basically the number of weeks it would take to sell all the homes available on the market based on the number of homes that are selling at that time.  (I’ve tweaked the formula to diminish the spikes caused by the huge seasonal dropoff in new listings each December/January.)   There are many ways to calculate absorption, but the basic idea is simply to capture how quickly demand is eating supply.  Less time to absorb the supply should reflect a “hotter” market where sellers can demand top dollar. A higher absorption rate, on the other hand, means that there’s relatively more listings on the market than demand for them.  That would tend to suggest a buyer’s market and softer prices.

Well, I’ve looked at this chart long and hard and I just don’t see those lines moving that way at all.  In fact I’ve looked at similar data as far back as 2002 and the only thing that’s clear is that people forget about buying or selling a home at the end of the year. Look at 2006:  the market got tighter but prices stayed pretty flat. In 2007, stuff was being absorbed more slowly (the red line goes up), but prices went up anyway.  In 2008, you’d think that with only two weeks of supply available, home prices would be skyrocketing.  Obviously that aint happenin’.

I’m not an economist or a statistician, but I did get my dear wife, who eats statistics for breakfast, to check my methodology.  I think these results are quite counter-intuitive.  Here are the explanations I can think of.  Please chime in with your own:

So is there any other metric that correlates more closely with changes in price?  How about the famous “DOM” — Days on Market.  This is how long a property takes to go from being listed to being sold.  The theory goes that when properties sell quickly the market is “hot.”  Why do properties sell quickly?  Probably because … there’s more demand than supply.  ie.  More people making offers, more people getting the loans they need, more people willing to waive inspection contingencies and buy “as is” just to get the deal done.  So maybe DOM actually does capture those muliple offers where the Absorption Rate just doesn’t.

So will DOM tell us how “hot” the market is and where prices are headed?  Or is DOM dumb.  Stay tuned….