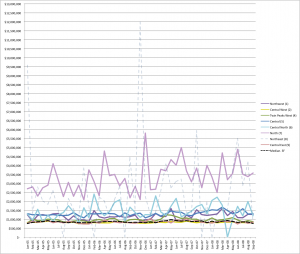 I was wondering how prices in various MLS Districts in San Francisco were doing relative to each other and to San Francisco as a whole so I graphed the monthly median prices of single family homes in all but the southernmost districts (3 and 10) for January 2005 through September 2008 and came up with this beauty.  (Please click on it to enlarge.)

So, a couple of things jump out.  Northeast District 8 (the pale dotted line), which includes tony areas like Russian Hill and Telegraph Hill as well as the Financial District, is all over the place in terms of price swings.  There are very few transactions from month to month (sometimes none at all) because there are so few single family homes in those areas.  Bottom line:  forgeddaboutit.

Next, the black dotted line towards the bottom of the graph is the “All San Francisco” median.  That partly explains why it’s so “flat”, because it averages out the discrepancies between the high-priced and low priced areas, those that are doing well, those that are doing less well, etc.  One interesting thing to notice is that there are several MLS districts that closely track the All San Francisco median.  Those are Central West (District 2) and Central East (District 9).  Go here for a detailed map of the districts.

As you move further up the graph you can see the price spread or premium for the different districts.  Twin Peaks West (4) is just above the median.  Central (5), which includes my home area of Noe Valley, and Northwest (1) are more or less within the same range with Central showing a more consistent trend line.  Central North (6) is clearly more volatile, with prices bouncing above and below Districts 1 and 5.  I need to look more closely at the number of sales for District 6 but my hunch is that the volatility reflects two things: first, the single family homes in this District range from the pricey Painted Ladies of Alamo Square to much more modest homes near the Panhandle.   Finally, there’s North (7), which includes Pacific Heights, Presidio Heights and the Marina.  No surprise why that district’s prices soar above the others.

I’m going to slice and dice these statistics in other ways in future blogs.  Top on the list is a hard look at whether the market is as “bad” as the newspapers would lead you to believe.  But I want to close with a cautionary word.  Many of the MLS Districts are not necessarily homogenous.  I’ve already mentioned Central North (6), but you could make the same point about several of the other Districts too.   It’s just more proof that real estate is local, local, local.  What’s happening in Miami or Sacramento isn’t what’s happening in San Francisco — and, especially in a concentrated urban environment like San Francisco, you have to look at the numbers and think about them very very carefully.