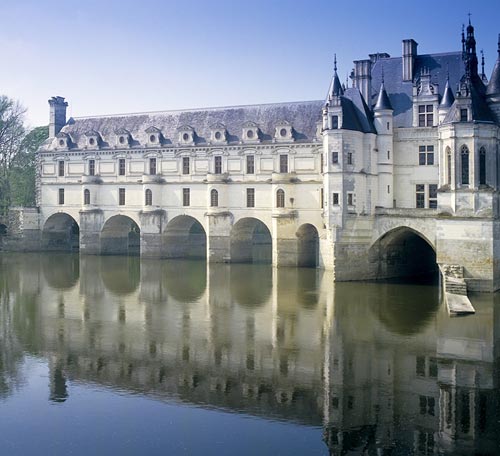 Every time there’s a housing slump, there’s discussion about whether the top end or the bottom end is fairing better or worse.  Here’s a June 2009 article from The Examiner, declaring that luxury home prices in SF are picking up.  And here’s a report published by First Republic Bank, which puts out a so-called “prestige home index,” for various cities in California, stating that luxury home prices in San Francisco continue to fall.  Here’s the accompanying chart from First Republic.

And around the beginning of the year, the folks at Paragon Real Estate published an interesting report, How_Much_Have_San_Francisco_Home_Values_Declined_Feb_09,  that broke down price declines based on price range.

But what really constitutes “the luxury market” in a town where you can’t buy a shack for less than half a mill and where the average price for a home was over $1 million in July?

To begin to answer these questions, I first looked at the distribution of sales prices over the last few years. I wanted to create a “snapshot” of the overall market, while including enough data to make the results meaningful.  Here’s a chart that shows how sales were distributed in each price category. 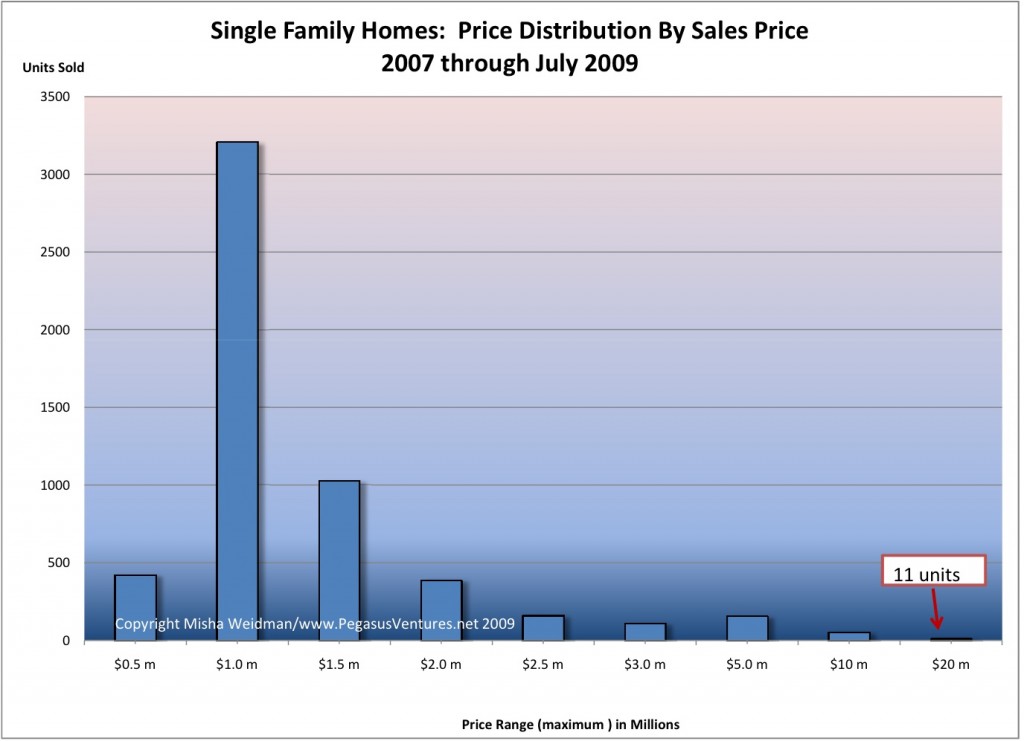 Again, not surprising.  $5 million is a lot of mullah in anybody’s language, though this is a pretty toney town and looking at the mansions up at Pac Heights and Seacliffe (I added the “e”, thank you very much), I expected that there would be more sales in the stratospheric range.

But there aren’t, so whadyagoingtodo?  First, you’re going to be very careful about jumping to any conclusions, because there just isn’t a lot of data.  What’s more, properties at these price levels really do tend to be “unique” – that’s part of their value — and they don’t turn over frequently. This increases the difficulty of reaching meaningful conclusions about price fluctuations in this high-flying, thinly traded market.

Now that we’re done with the disclaimers, let’s see what I came up with.  I picked a minimum sales price of $5 million as fitting the definition of “luxury” rather than just very expensive.

First, I looked at sales volume, another of those metrics frequently discussed in the context of price fluctuations.  The assumption is that when there are a lot of sales prices tend to go up; fewer sales, prices go down. 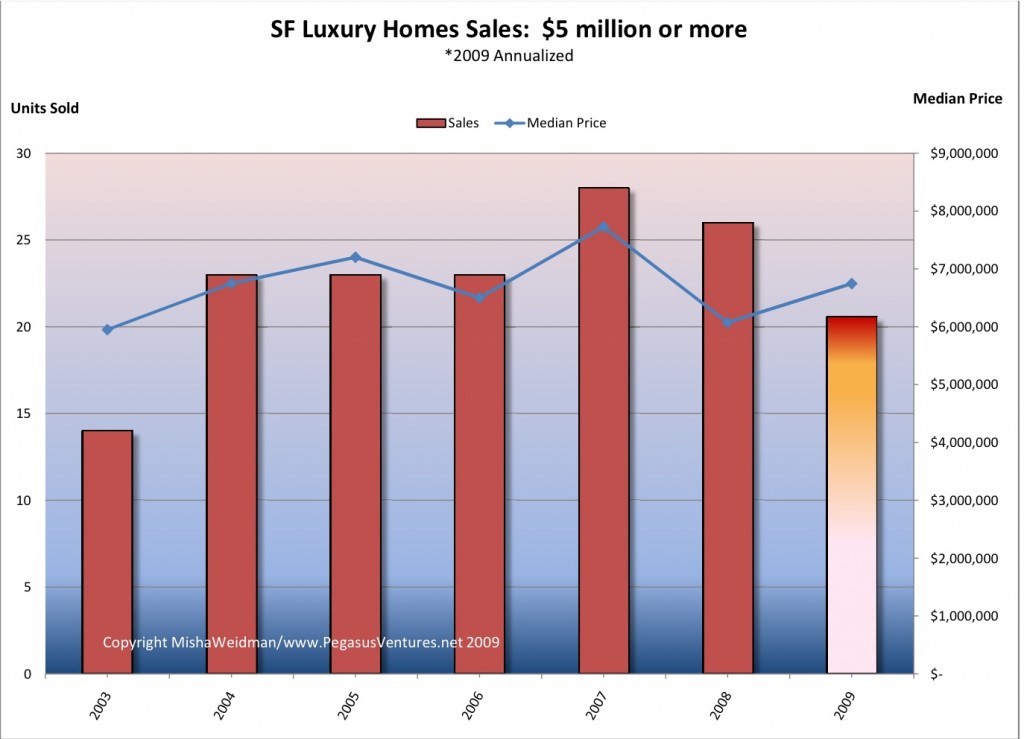 Clearly, sales volume is down for 2009 on an annualized basis, but prices have nevertheless increased from 2008.  Not much of a correlation there.

Next I looked at the average number of days on the market (“DOM”) for these properties to sell.  In a previous post, I’ve argued that this metric really does seem to have a strong inverse correlation with price:  if it’s taking longer for houses to sell, prices tend to go down; if houses are selling quickly, prices tend to go up. The following chart shows DOM plotted on the right-hand axis with the time-scale reversed so that longer time periods are at the bottom and shorter periods are at the top.  I’ve also shown the number of units sold per year. 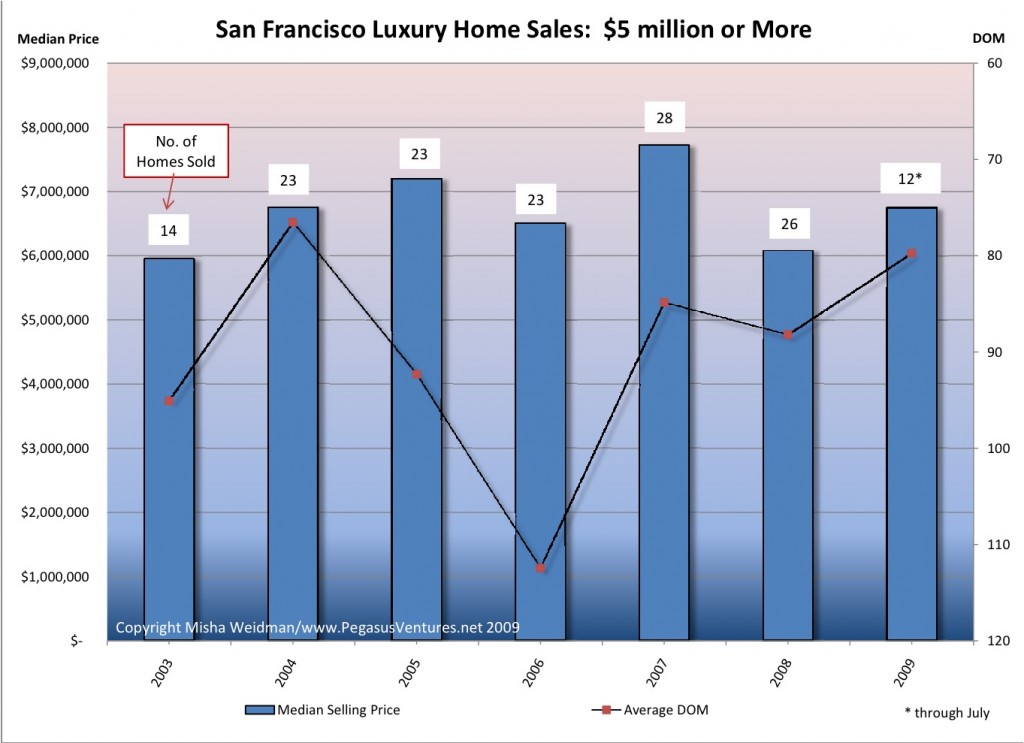 Here things seem to line up pretty well.  In 2009 so far, there’s been a shortening of DOM and prices have recovered somewhat from 2008.  But again, we’re working with very small numbers of sales, so I’d be careful drawing any definitive conclusions.  In fact, if you just focus on the median sales price, it seems to me that prices have remained pretty much within the same band of value since 2004, except for a spike in 2007 when the overall market was at its hottest.

So, gentle reader, next time you’re shopping for that $5 million house, don’t expect to pick it up at fire sale prices.

As for the rest of us, the truth is that pretty much anyone who can afford a house in San Francisco is already living in luxury.