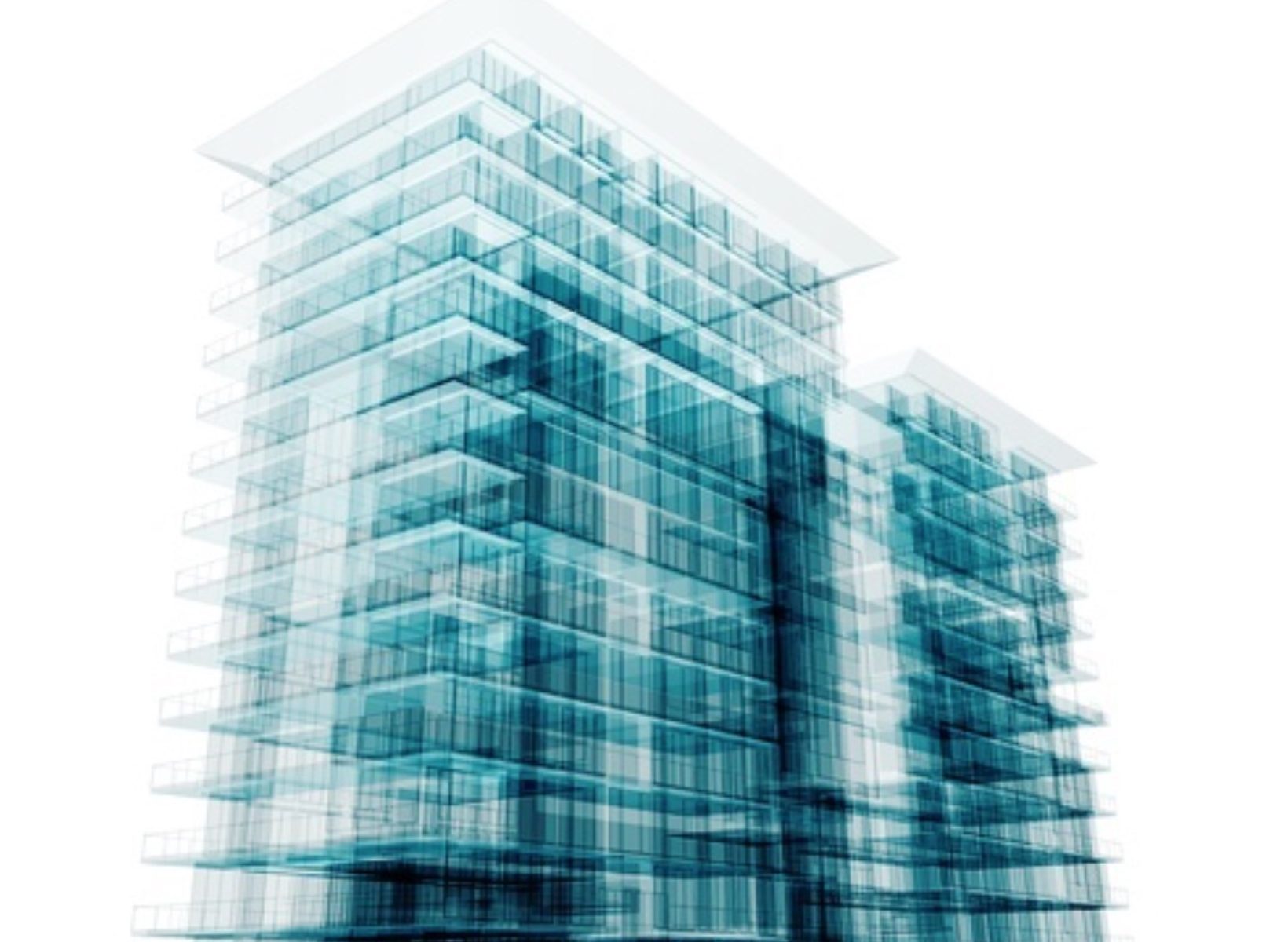 In the spring of 2018 a slew of articles breathlessly foretold of mass migrations out of the Bay Area due to a host of reasons –including lack of affordable housing, long commutes, and the anti-immigrant policies of the Trump administration.  I blogged about how those articles ignored a lot of data to the contrary here.  Home prices continued to increase.

Now here comes Zillow with a comparative analysis of major metro areas which suggests that people are leaving the Bay Area in droves.  The implication, once again, is that prices are going to plunge.

The chart below, which measures percentage change in year over year inventory, is the one that’s gotten lots of attention; the SF Chronicle proclaiming, for example, that the “exodus is real, and historic.” 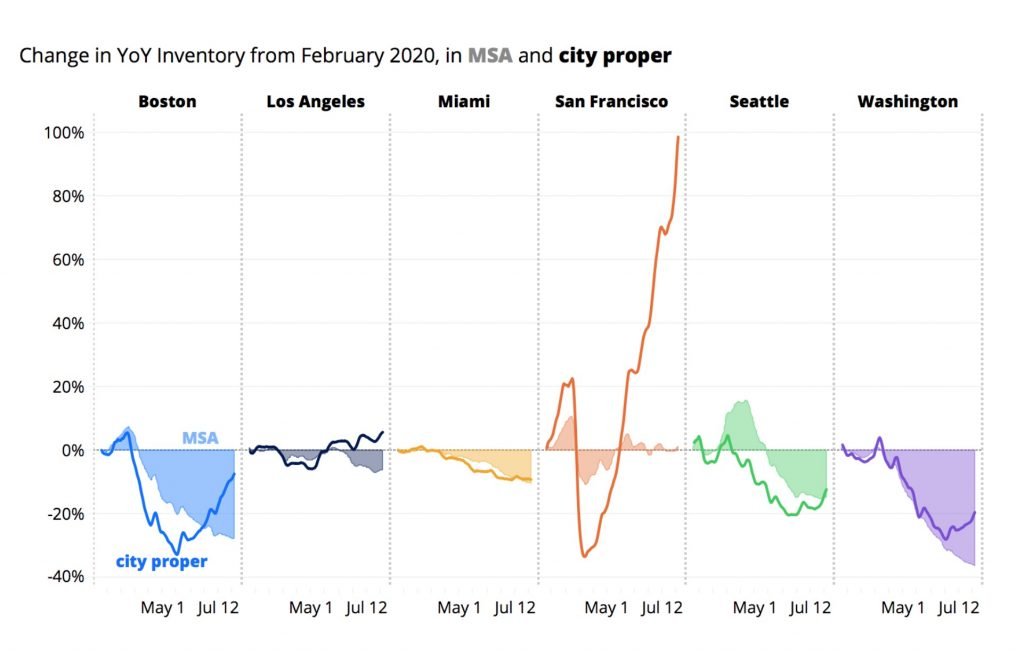 Reasons cited for the exodus this time around include all of the previous ones, plus those attributable to the pandemic, like the following:

Let me be clear: all of those factors, new and old, are likely having an effect.  It’s true that recent data indicates that the more suburban and rural counties in the Bay Area are significantly outperforming San Francisco right now (see below). At the same time, it’s probably too soon (again) to conclude that the rise in inventory means that people are fleeing the city in massive numbers.  And it’s certainly too soon to conclude that prices are about to fall off a cliff.  Our data suggests a more complicated picture. 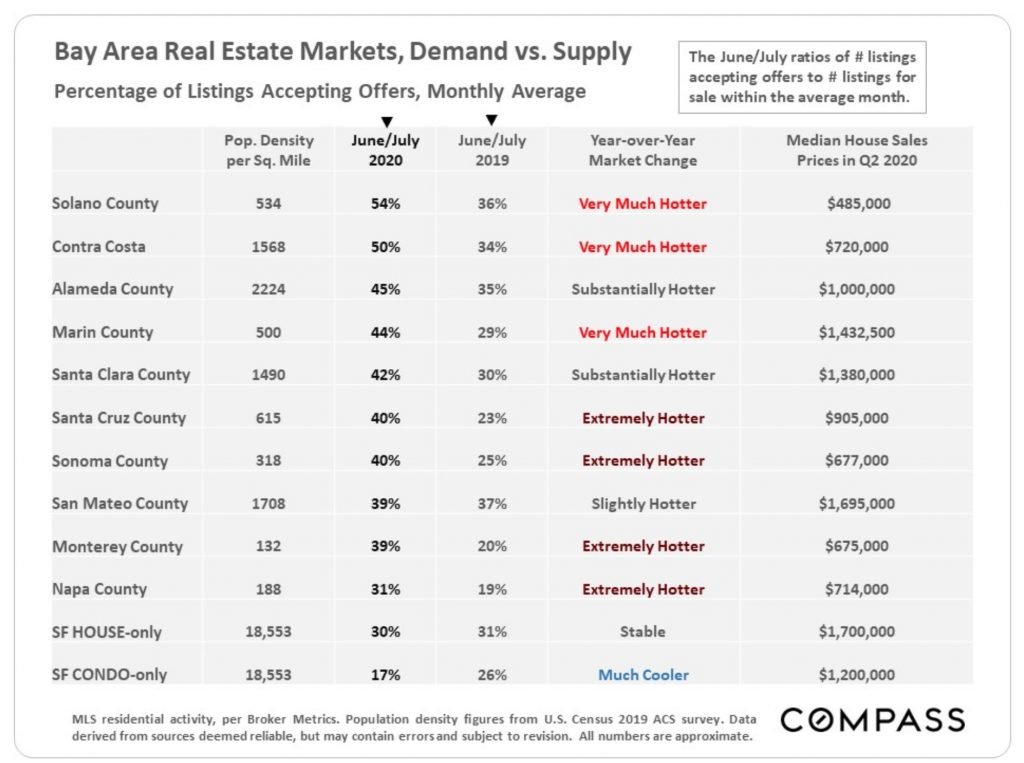 This makes sense.  If people are leaving SF for the perceived safety and real outdoor space of the less dense suburbs, you’d expect people to be shunning the densest parts of San Francisco where “social distancing” is hardest, where you have to deal with common areas serving hundreds of other condominium owners, and where – if you’re lucky – your outdoor space will be a three by five foot balcony.  Dense, high-rise neighborhoods like Mission Bay and South Beach also happen to have been – until the pandemic – among the most popular with young techie buyers who appreciated easy access to their jobs in the South Bay via freeway or CalTrain and who relished the nightlife that those neighborhoods offered.  With these buyers now out of a job or able to telecommute, demand is drying up at the same time that supply is skyrocketing.

But Zillow’s inventory chart belies a market that is both more nuanced and more robust than it suggests.  For example, there’s been a massive rebound in the number of home sales since the Shelter-in-Place order relaxed a bit, starting in around April (note that sales trail deals going into contract by about 30 days.) 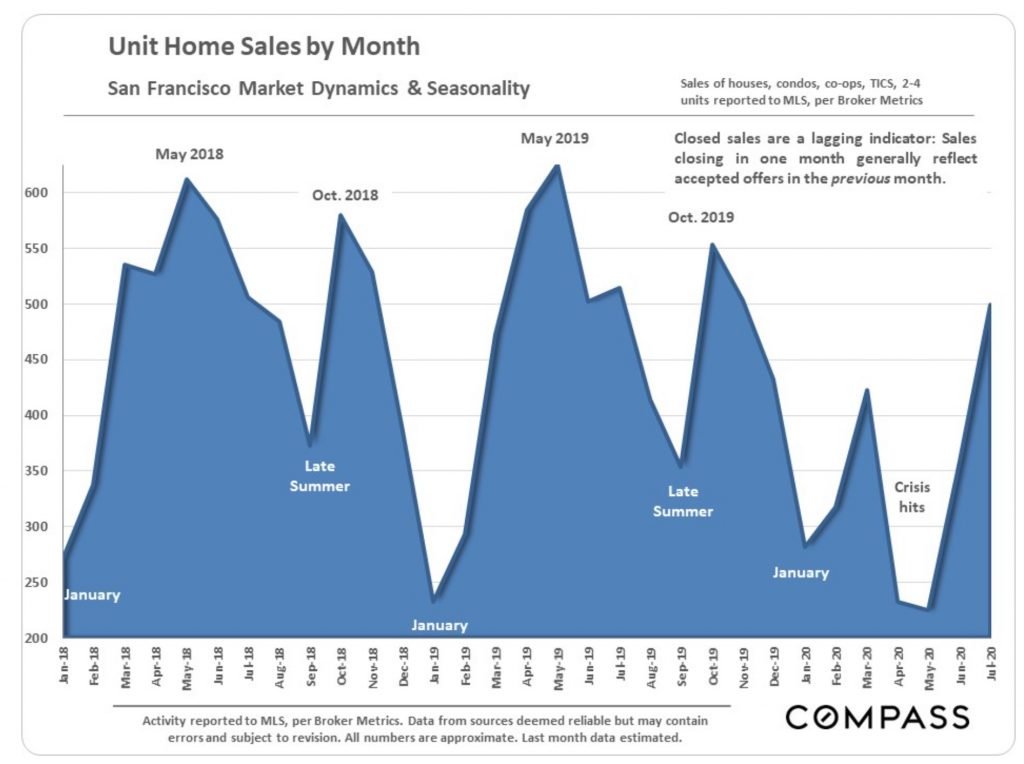 Sales and Prices Have Rebounded. While the typically strong Spring selling season was a bust due to the Covid lockdown, summer sales numbers are around the same as they were in the previous two years.  Likewise, prices are generally holding up.  The median price of a single family home hit a record in July, while condo prices are at around the same level they were last year and down just 4.5% from their all-time highs of October 2019 (see charts below).  Will this strength in prices continue to hold up?  I’m not ready to prognosticate yet; you can read my thoughts in my previous market report, but overall I’d say that the market is exceeding my expectations. 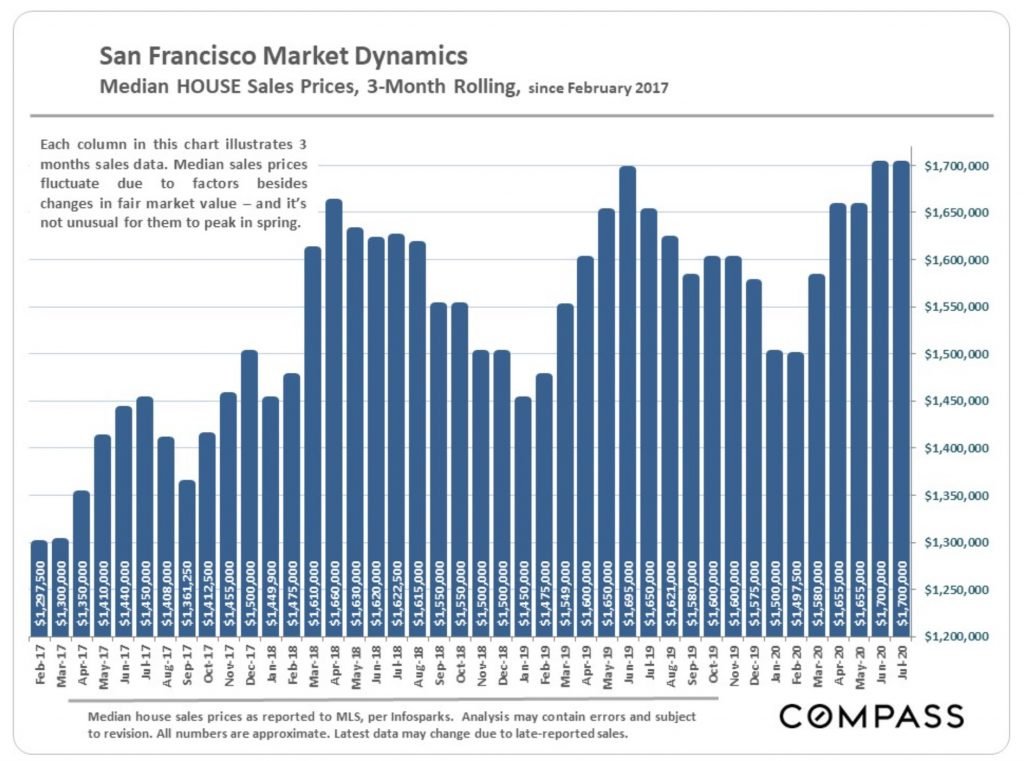 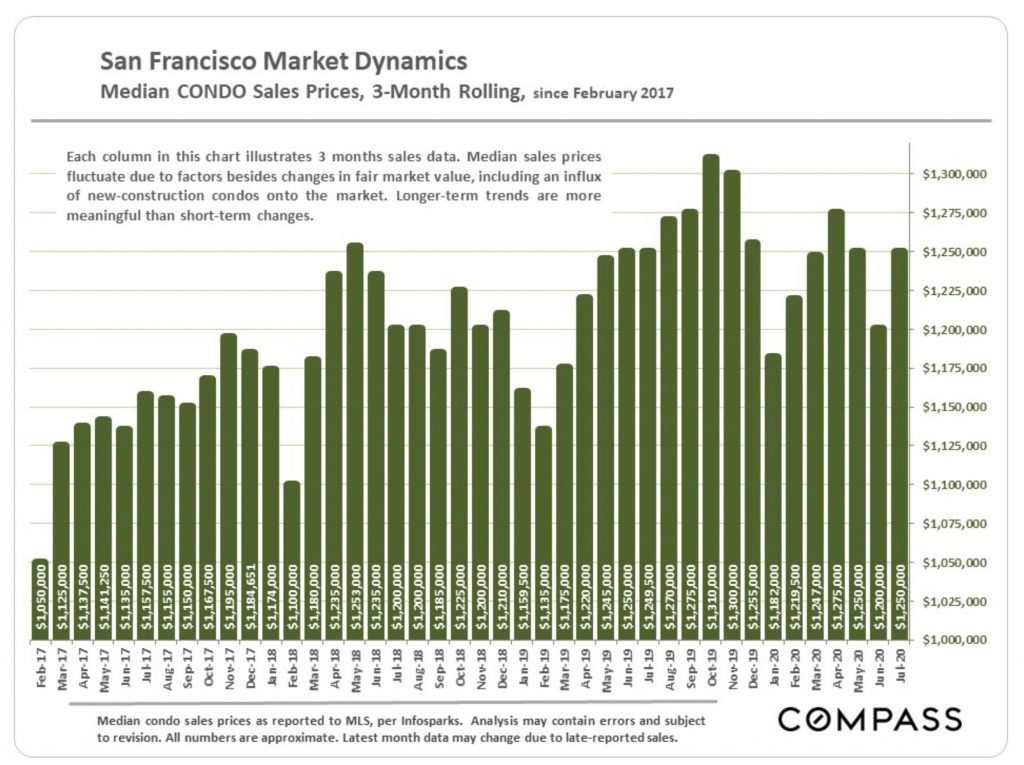 The Luxury Market.  You’d think that the people most able to flee the city would be those who are the most affluent. After all, they’ve got the assets to buy new homes and their jobs are likely more secure than the typical code hamster. If they were doing so, you’d also expect more luxury homes to be for sale, less of them to be going into contract, and prices to be falling.  None of that is happening.  In fact, the number of luxury home and luxury condo sales is higher than it was last year at the same time. And prices, so far, are holding up too.  To be fair, this may be because we experienced a delayed spring “bounce” this year, whereas last year’s numbers reflect the more typical summers slowdown in luxury sales.  Furthermore, word on “the street,” which reflects the real-time market, suggests that condos priced at over $1 million are struggling.  It’s the one bedroom entry level units that have the best chance of selling.  Buyers are being very picky about everything else. 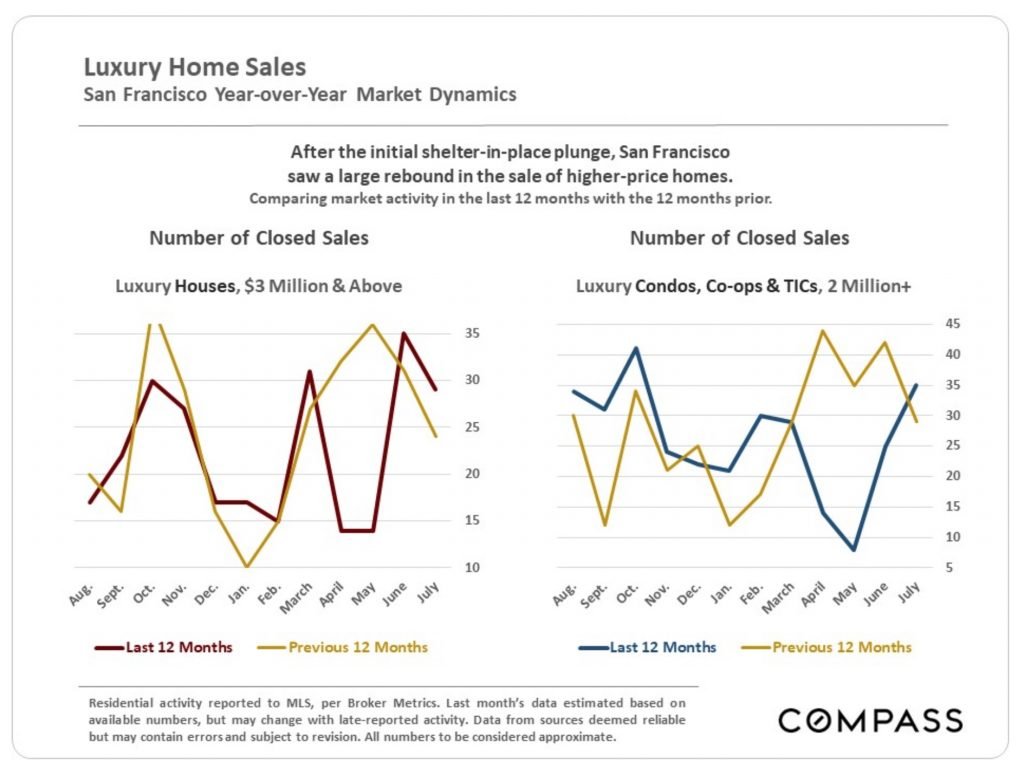 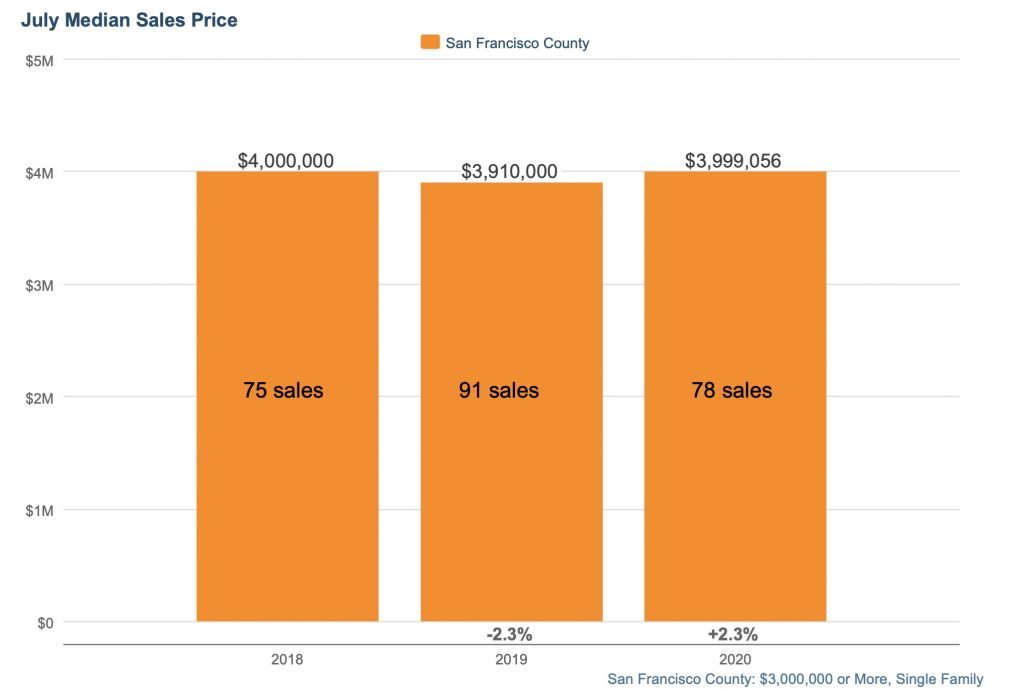 So, while it’s way too early to say “the sky is falling” in SF’s real estate market – though the amount of ash falling these days is terrifying in itself – there is real weakness in the condo market overall.  It’s showing up as a huge increase in new inventory at the same time that demand is falling.  That is a classic recipe for falling prices, even if they haven’t shown up in closed deals — yet.

It’s important to bear in mind that since the high-rise condo building booms that started in the early 2000s, condo sales have represented an increasing part of the San Francisco market.  In recent years, the split between condominium and home listings has consistently ranged between 60/40 and 55/45 percent.  That balance changed dramatically as a result of the Covid epidemic, starting in May 2020, as the next chart shows. 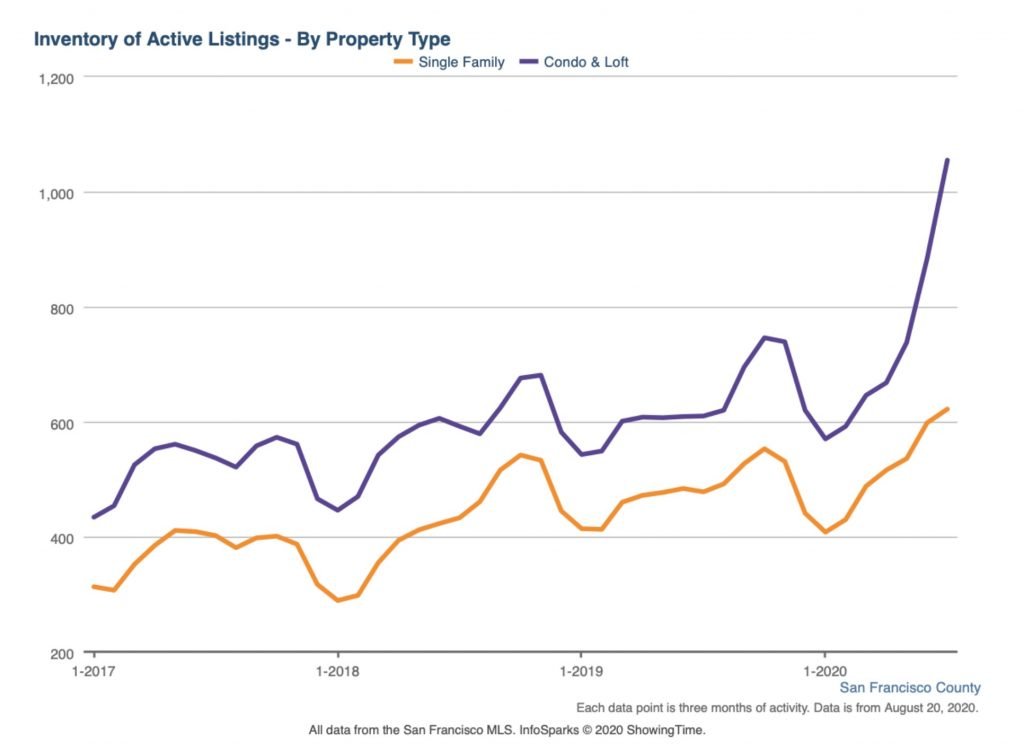 If there is a chart that represents the divergence between the single family home market and the condo market, it’s the next one.  “Months Supply of Inventory” captures how long the inventory available on the market would take to be absorbed at the current rate of properties going into contract. The more “months supply,” the weaker the market from a seller’s point of view. 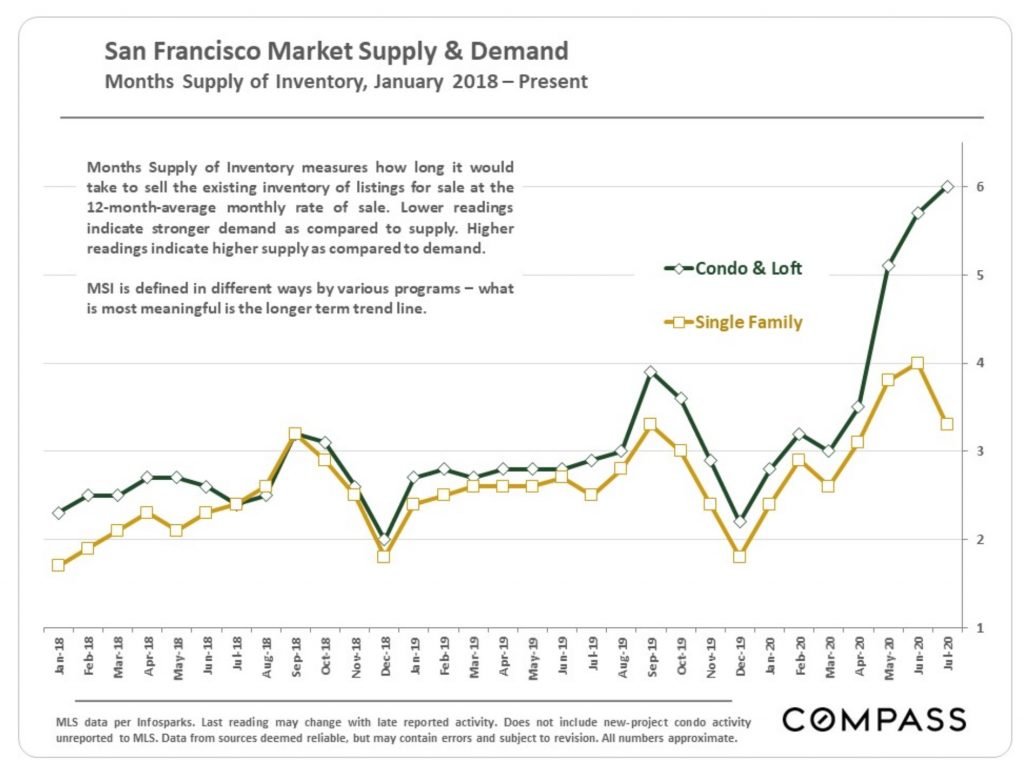 This chart shows that the single family home segment, while somewhat weak by recent standards, seems to be heading in a positive direction after sustaining an understandably calamitous period during the Covid shutdown.  The same cannot be said for the condo segment, which has clearly weakened into a buyers’ market.  The diverging segments can be seen across a broad range of metrics, as the final chart shows. 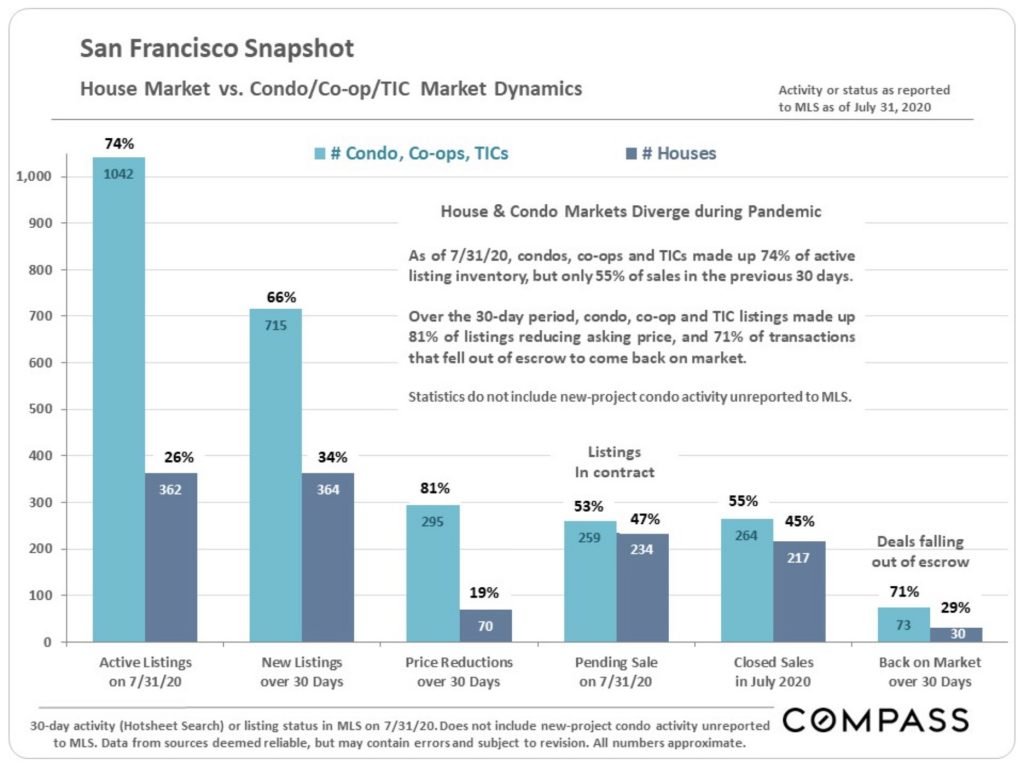 This doesn’t paint a pretty picture for condo owners trying to sell right now.  Tons of inventory, much of it new; tons of price reductions; and tons of deals falling out of escrow.  That’s not to say that some condos aren’t selling, but with condos making up 74% of active listings in July, buyers can afford to be picky.

To make it personal, that’s been my experience.  Of the three condominium listings I’ve had since the Covid-Crisis – we were scheduled to go on the market literally days before the shelter-in-place order came down – the cheapest sold quickly, the other two had major price reductions, one is now in contract, and the third will likely be taken off the market and rented until more propitious times.

If you’re thinking of buying, this really – no, I mean really – is a good time to be out looking, particularly if you’re considering a condo.  Even if you’re thinking about buying a single family home, I’d say take advantage of historically low interest rates and get in there. Good homes, especially at the cheaper end, may still attract multiple offers, but with open houses forbidden under San Francisco’s current Shelter In Place rules, there’s much less competition.  This is already being reflected in the new marketing term, “transparent pricing”: list prices once again reflect what the seller actually hopes to get, rather than just being a teaser number.

If you’re looking to sell your single family home, the market is holding up reasonably well —  for now.  I would not assume it will last, and it may get worse before it gets better.

As for condo sellers, it really depends on what you’ve got. If you’ve got a delightful Victorian with a deeded garden, you may be fine.  If you’re in a downtown complex with no outdoor space, I’ll tell you what I told my clients whose unit I was not able to sell: if you can afford to, wait.  This too shall pass.  And when it does, everyone will come roaring back to the City by The Bay.