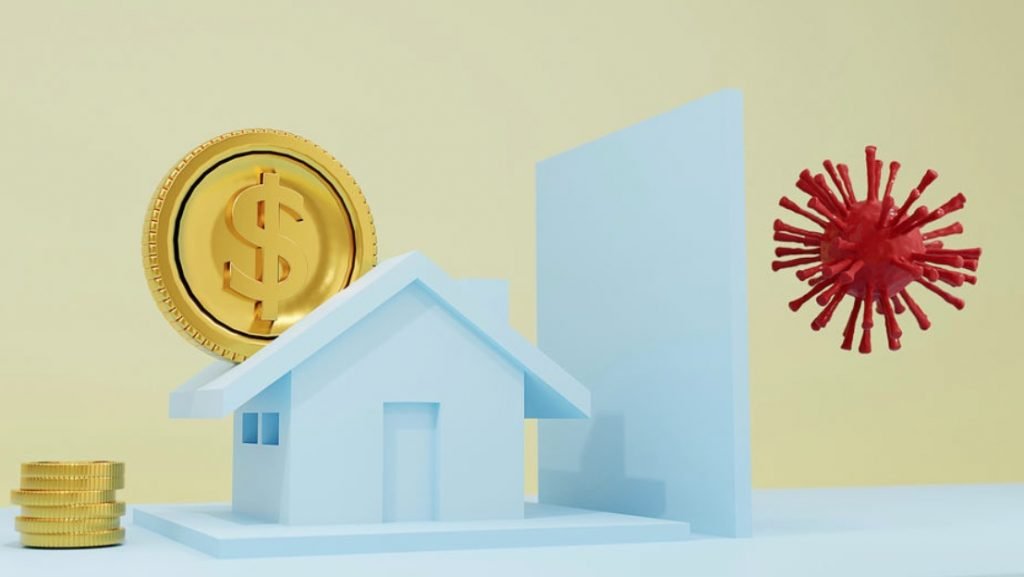 In my last newsletter, I shared some short-term data on what San Francisco’s Shelter-In-Place order was doing to San Francisco residential transactions.  In short, it caused activity to crash to a halt.  It’s still too soon to determine what the pandemic’s mid- or long-term effects will be, but there has been a change.  Before going into details, let’s recall how we got here.

How We Got Here

On March 28, The Department of Homeland Security issued a statement including real estate services as “Essential.”  Since Newsom’s order incorporated the federal standards, real estate services became “essential” under the State order, though subject to more stringent local orders.   On March 31, San Francisco modified its own SIP order to include real estate as an “essential service.”  As far as agents showing homes to prospective buyers was concerned, the order provided that in-person showings were permitted only “if a virtual viewing is not feasible.”    Right now, that standard is the one that remains in effect.  Is it being honored?  That’s another story.

When is a Virtual Showing “Not Feasible?”

The trouble is that no one can really point to an example of where a virtual tour wouldn’t be “feasible.” As one opinion writer mused in this article in the SF Examiner, “in order to find a listing without photos or a [virtual] tour you’d have to first find a time machine and set it to 1997.”  Photo galleries are the minimum marketing package for all listings these days.  Well-marketed properties will also have videos, and the best will include 3D virtual walk-arounds and even overhead drone footage.  So, when is a virtual tour not feasible?  Nobody really knows.

What I can tell you is that since the beginning of April my industry has been quietly moving ahead with in-person showings while turning a blind eye to the “feasibility” requirement.  I’m not casting judgment on my colleagues:  the showings are done under strict precautionary guidelines being updated almost weekly by The California Department of Health and others.  (Note, some other counties do permit in-person showings so those guidelines are relevant to them.)

For myself, I’m complying with the San Francisco SIP order and not doing any in-person showing.  However, I am facilitating limited showings for buyers and their agents who choose to visit my listings in person.

We normally don’t look at weekly charts because they’re too short term to be useful.  However, in these unprecedented and volatile times, they can provide some insight into what’s going on right now (Click the charts to expand.) 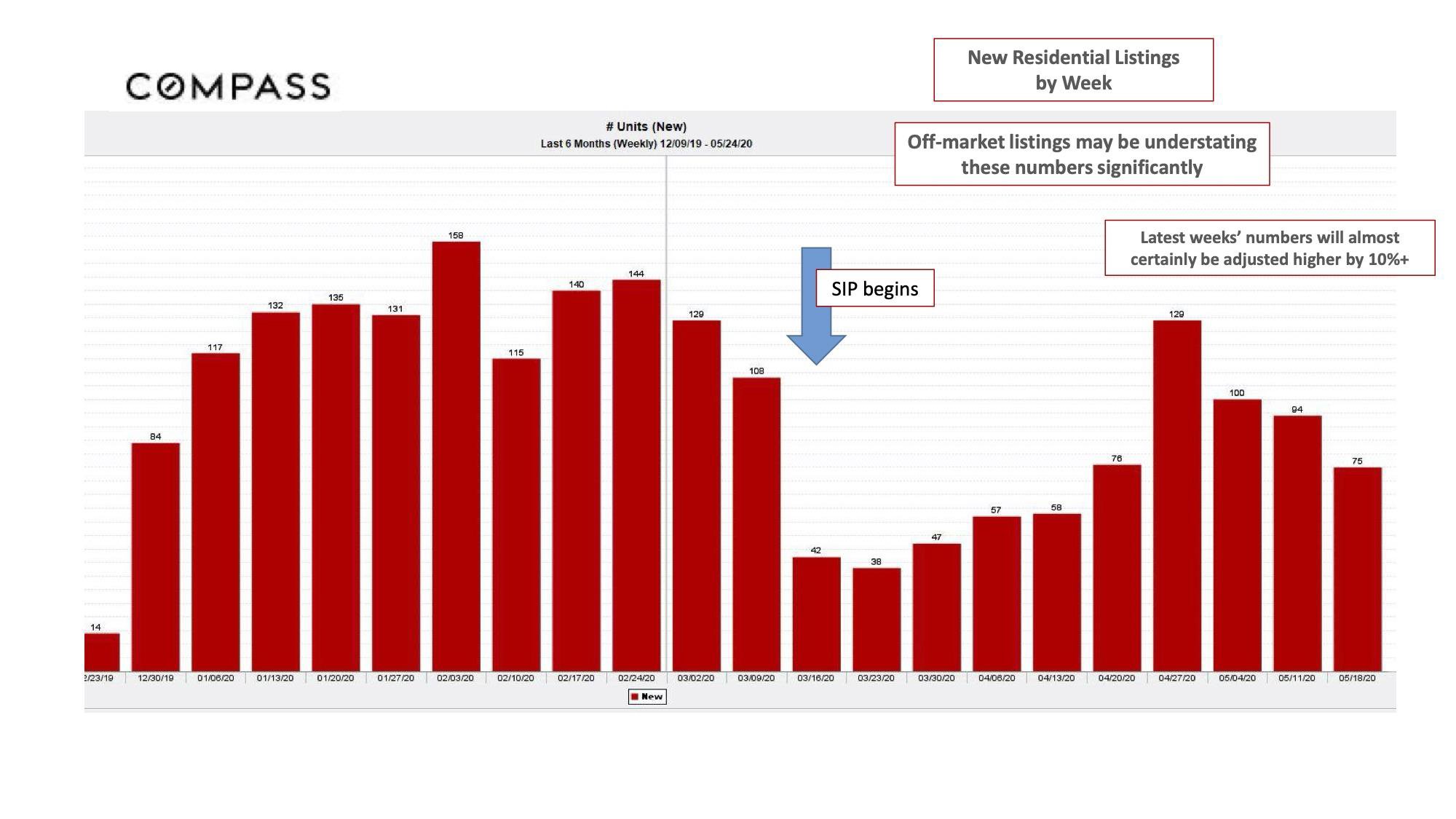 For the week of March 27, coincident with the Dept of Homeland Security’s announcement of real estate as an “essential service,” there was a huge jump in new listings.  Since then, the number of listings has fallen though they’re still twice the number we saw right when the SIP order went into effect.  I can’t explain the decline in new listings in weeks since April 27.  My guess is that it’s partly a result of the numbers being preliminary and partly that it’s taking a while for agents and owners to decide what they want to do.

Likewise, listings going into contract have come back from a near stand-still, as the next chart shows. 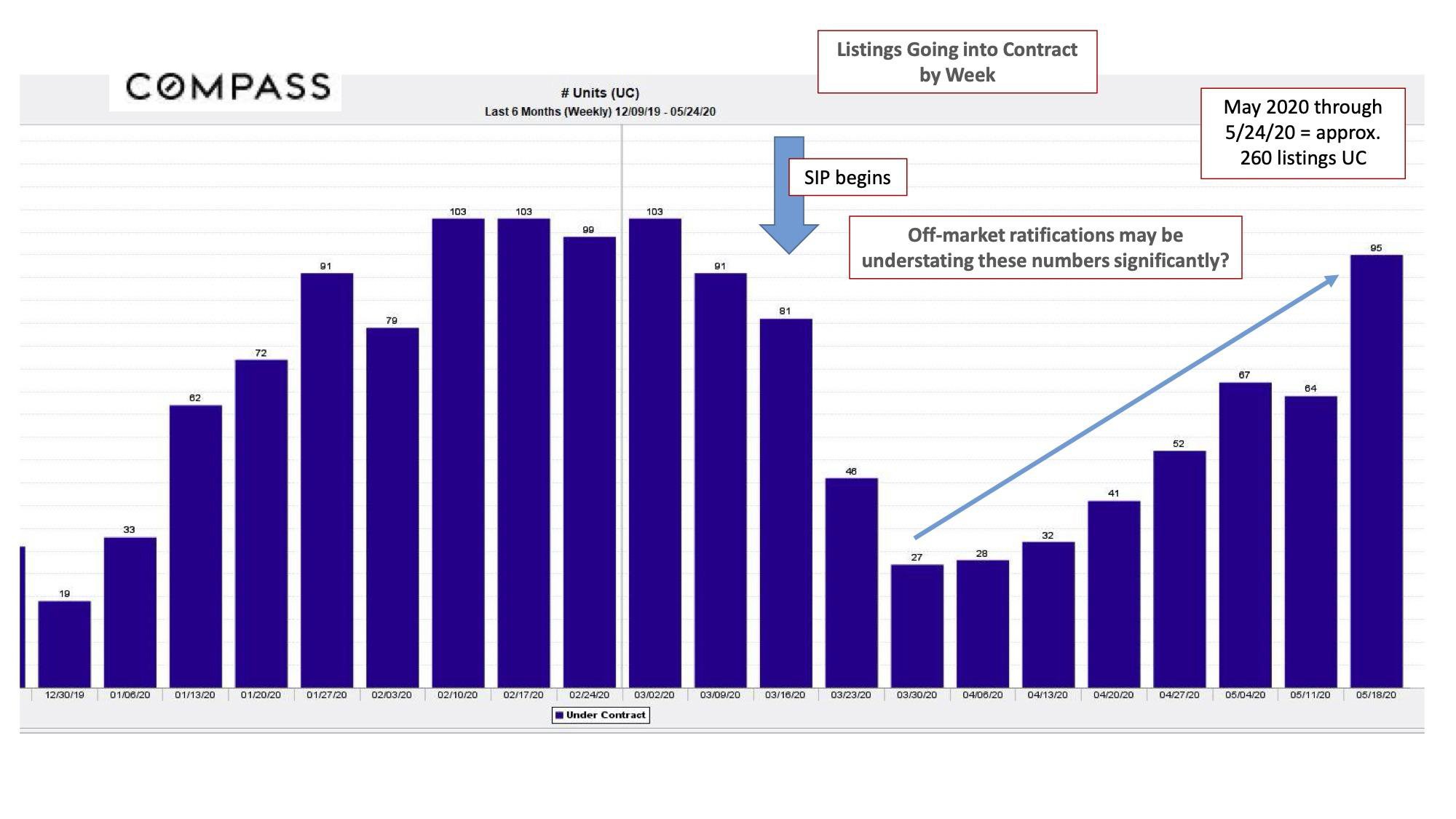 Transaction volume occurring for the first few weeks after March 16 almost certainly reflects deals where buyers were able to view homes in person before the SIP order took effect.  But starting around April 20, and ahead of the orders defining real estate as an “essential service,” transaction volume started heading up.  As of May 18, it was just above pre-SIP weekly volume. But remember, we were just coming out of winter when the order went into effect, so volume was low anyway.

And before anyone gets carried away with optimism, let’s take a look at a few charts comparing where we are to last year.  We don’t yet have numbers for May, but you can see that we are running at less than a third of our sales volume for this time of year.  Spring is typically one of our two busiest seasons. While the numbers for May, when they’re in, will doubtless show an improvement from April, they’re going to be nothing like the usual seasonal pace. 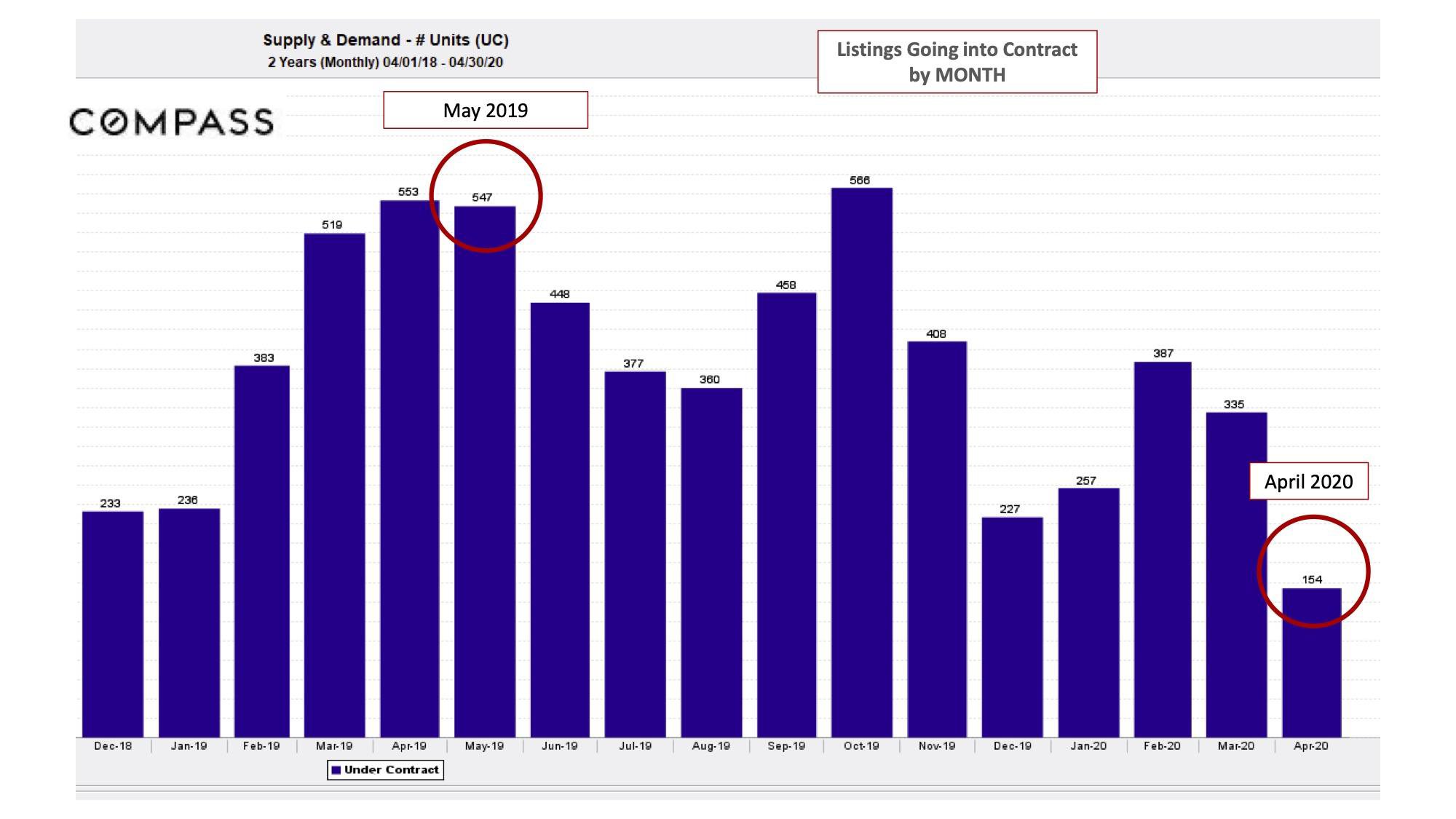 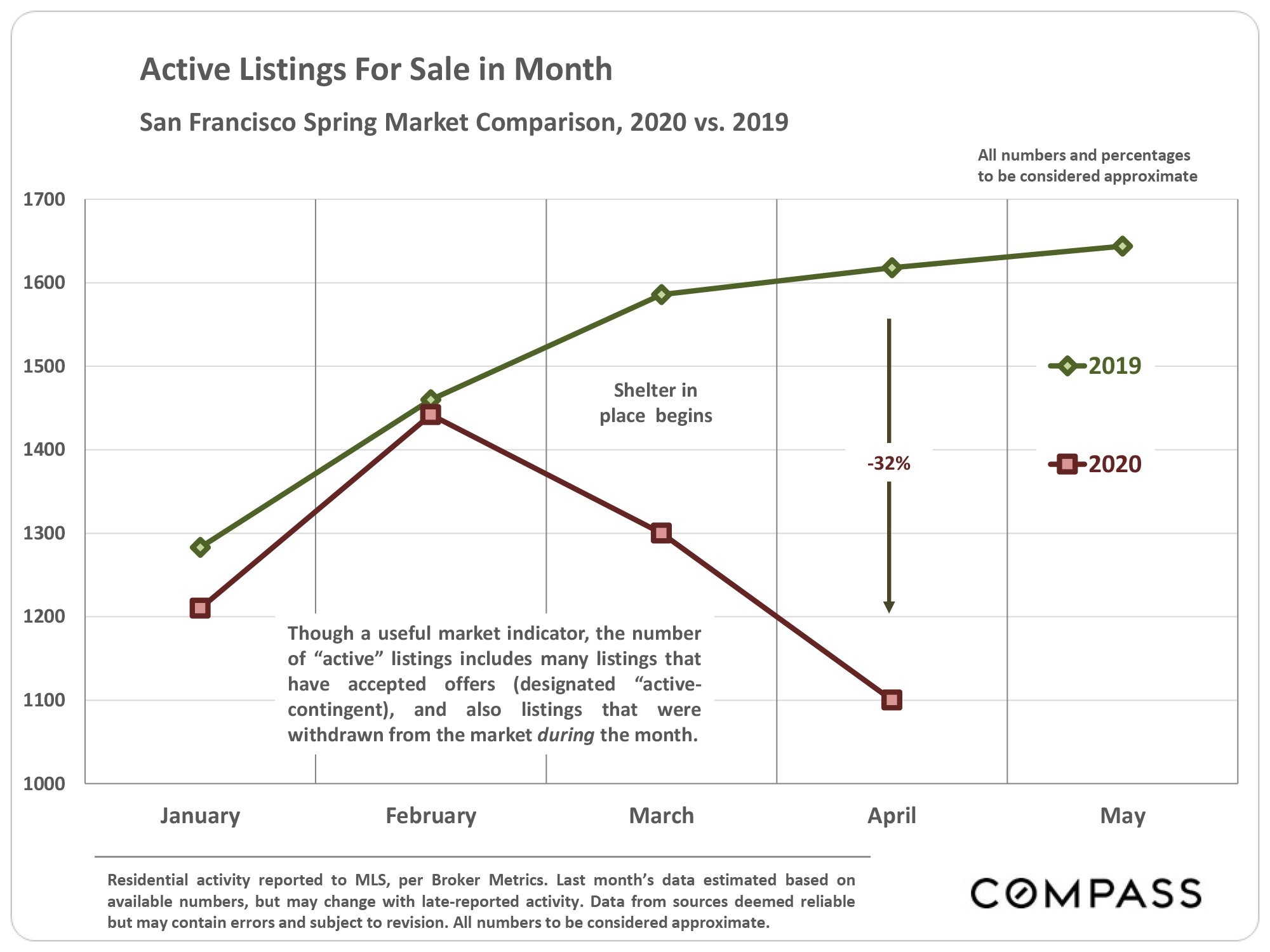 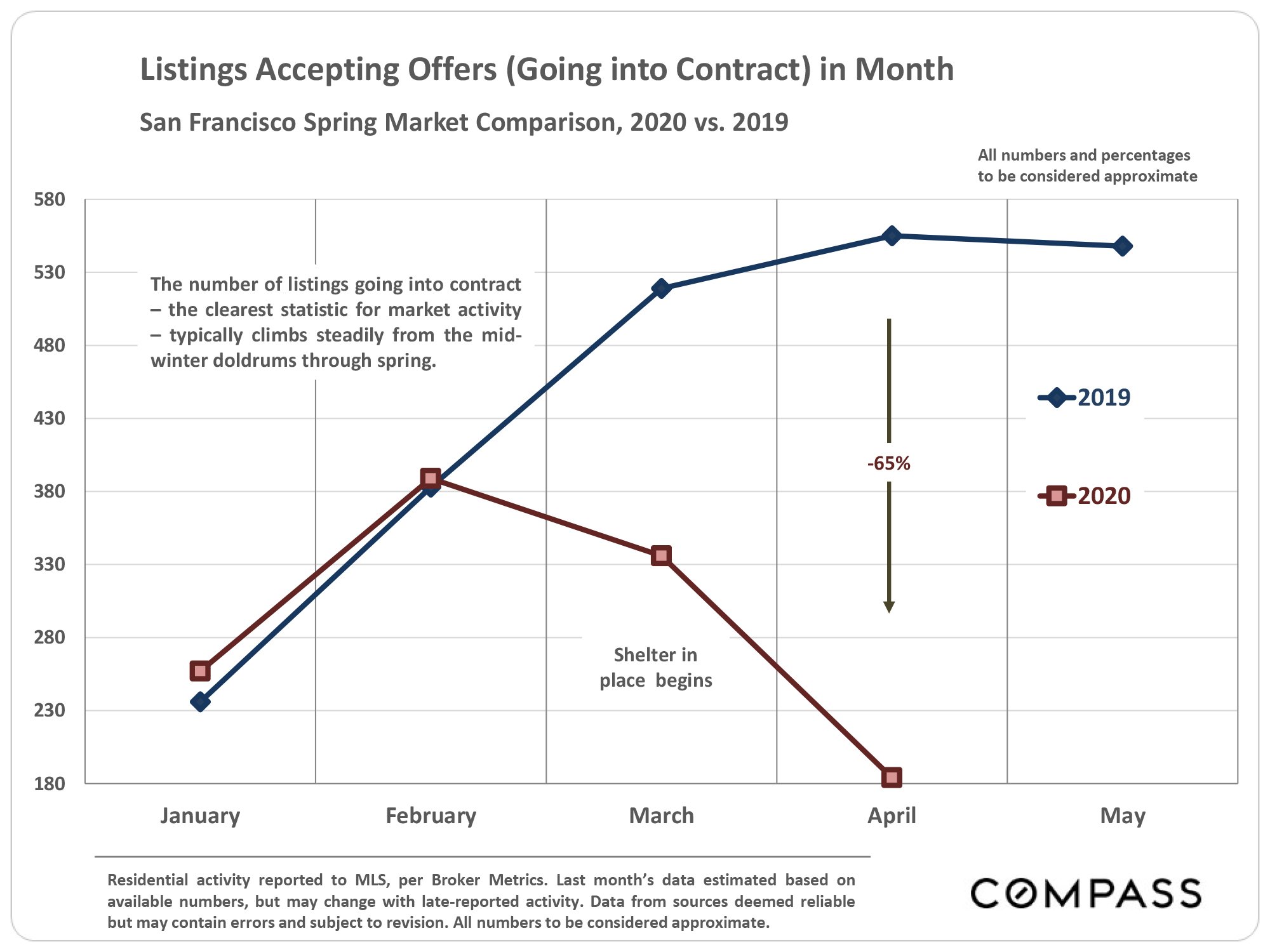 Of course, this is the question on everybody’s mind.  What’s happened to them?  The chart below combines single family homes and condo prices because there simply haven’t been enough sales for the numbers to be reliable without combining them. 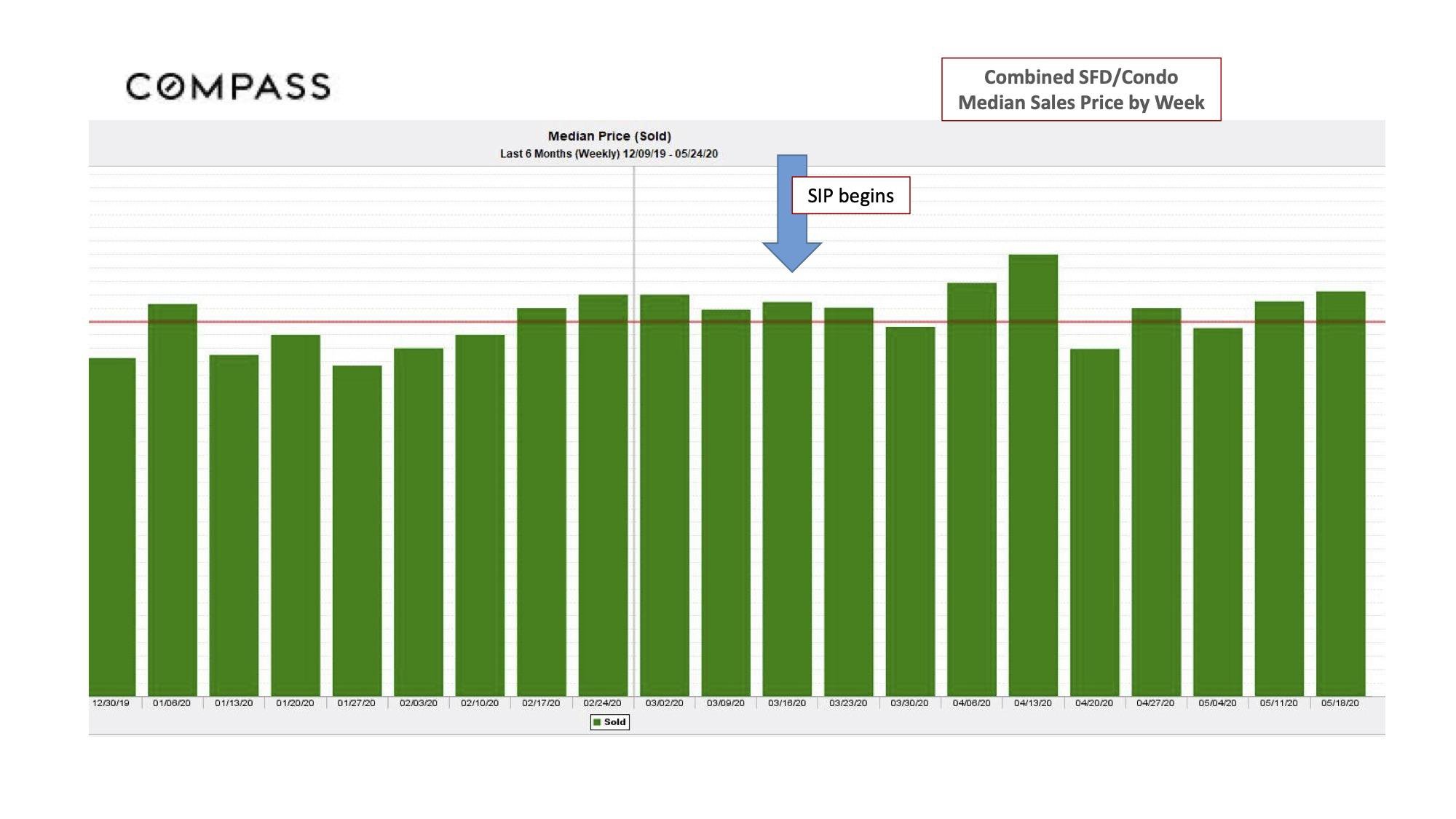 The takeaway here is simply that we haven’t seen an instantaneous and massive drop in home prices.  Until we get more data and are able to look at different segments (high vs low priced, condos vs homes), I’d be very cautious drawing any more conclusions.

Word on the now-virtual street, which I get through well-attended weekly sales meetings with over 100 agents present, is that single family homes under $2 million that check all the boxes are holding up OK.  Some agents are still listing very low in the hopes of attracting interest, but we may be re-entering an era of “transparent pricing” where properties are actually listed at what the seller expects to get, rather than hundreds of thousands below it in the hopes of creating a bidding war.  Certainly, no one should expect to see many of those while in-person showings remain severely limited.  The days of 100-person week-end open houses may be over, perhaps for longer than we think.

If there’s good news for sellers here, it’s that the days of “lookie-loo” buyers is also over.  Many sellers and agents are requiring that buyers who ask to see a property have done their due diligence and have shown that they’re financially qualified to purchase. Given the health risks, not to mention the additional paperwork involved for everyone, that’s a good thing. If they want to see your property in person, it means they’re serious buyers.

We’re in unchartered territory here, so my guess is no better than anyone else’s, but since everyone’s been asking me, let me share my views candidly.

Certainly the consensus globally among economists seems to be that it’s going to take time for economies around the world to recover and the US is no exception.  How much time?  I’ve seen at least a couple of reports suggesting that a return to pre-pandemic levels of GDP may take two to three years, with the most optimistic suggesting as early as late 2021.

At the same time, we are blessed to be in a metropolitan area that has escaped – for now – the worst of the pandemic; one that has a diverse economic base; and, importantly, has been home to companies at the forefront of the “virtual” workplace since well before the pandemic.  That means that we’re more likely to have people who will keep their (well-paying) jobs and who can afford to buy homes in this area.

People will continue to move here and away, to get married, have families.  The fact that real estate activity started to increase even before the SIP order was modified to include it as an “essential activity” attests to it being, well, “essential.”  If the SIP order continues to lift, I think that there could be a lot of pent up demand chasing not a lot of listings – unless there’s a wholesale move on the part of sellers to dump their homes.  And, unlike a stock, that’s not so easy to do.

Longer-term, I find it hard to imagine that prices aren’t going to soften and perhaps soften considerably the longer we are without a real solution to this devastating disease.

But I am optimistic that we will find a solution eventually and when we do, I have no doubt at all that the San Francisco Bay Area will be among the first to see a recovery.  That’s not me being Polly-Anna.  I’ve lived through at least three major recessions and I believe that SF is even better placed now than in the past to bounce back.

And finally, for those of you just itching for a virtual tour of some beautiful condos, let me take this opportunity to proudly plug three of my own listings, all in Mission Bay.  (Click the links to be taken to the website.)