Noe Valley’s been my home since 1991 so I’ll admit that I track it with more attention than other neighborhoods.  For quite a few years now it’s also had a reputation for maintaining home values even as the rest of the city stumbles.  The question is whether that’s still true.
Back when I bought my two-unit home at a probate sale with one other bidder in attendance, the “hood” was closer to its working class roots.  Lots of single-story cottages in the 1200 square foot range and lots of duplexes.  It had a thriving lesbian community and was popular with singles who couldn’t afford to rent in the Marina.  It was San Francisco’s stealth neighborhood, just out of yuppy radar range.
By the mid-90’s it was growing increasingly popular with young families who were drawn to its slightly sleepy streets, decent weather, cute parks.  The shops along 24th Street had everything you could possibly need, but without the attitude of Fillmore Street or the grunge of the Haight.  All this, and decent Muni service downtown to boot.
When the dot-commers discovered that it also had great access to 280 and points south, prices took off.  Two-unit buildings started converting to single family homes (that’s what we did).  Little cottages would suddenly grow an extra floor, or a built-out basement, or both. Suddenly, we started seeing 2,500 foot homes and even the occasional trip-K (3,000 sf).
Prices inflated along with the floor-plans.  The million dollar mark was crossed some time around 2000.  The dot-com bust barely caused a blip.  By 2005 we were seeing feeding frenzies over houses approaching $1,000 per foot.   Even after the market started cooling off in 2007, Noe Valley prices seemed to defy gravity.
There’s nothing more local than real estate.  Could it be that Noe Valley was situated in some sort of socio-economic sweet-spot?  Many thought so, including me.  And until recently it was true.  But no longer.  Take a look (click to enlarge): 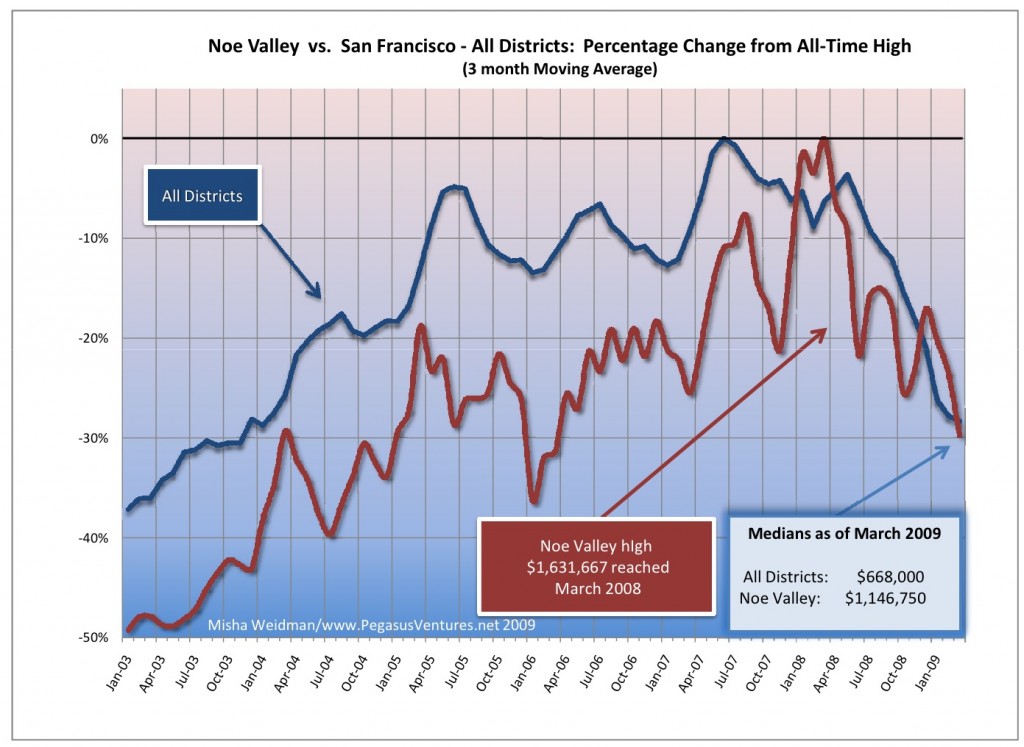 The data reflects sales of single family homes for MLS subdistrict 5C only.  Though the subdistrict includes areas as far up as Diamond Heights Boulevard and as far out as Guerrero Street, it captures the neighborhood pretty precisely. Here’s the MLS district map. 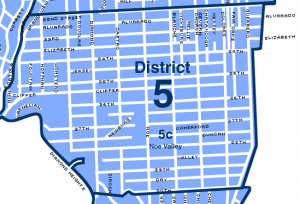 For the data-geeks among you – and I say that with the deepest affection – I should point out that the volatility of the line for Noe Valley prices is related to the much smaller volume of monthly transactions relative to the All-Districts data, and this is particularly evident around January of each year, when transaction volume really falls off.  Also, the three-month moving average is not weighted to reflect the number of transactions in any given month – it’s a simple average, as is the moving average for All-Districts.
These caveats aside, the trend seems pretty clear.  Noe Valley home prices continued to climb for nearly a year after the city’s as a whole had reached their peak.  But, starting in March 2008, they’ve dropped like a stone.  As of March, they’re actually doing slightly worse, on a percentage basis, than the city as a whole.
I’m not exactly thrilled about the thought that my house is worth about 30% less than it was a year or so ago (and, being both an optimist and a home-owner, I don’t really believe that’s true ☺).  Nor would it surprise me if Noe Valley recovered more quickly than some other neighborhoods.  But, at least for now, its gravity-defying days seem to be over.