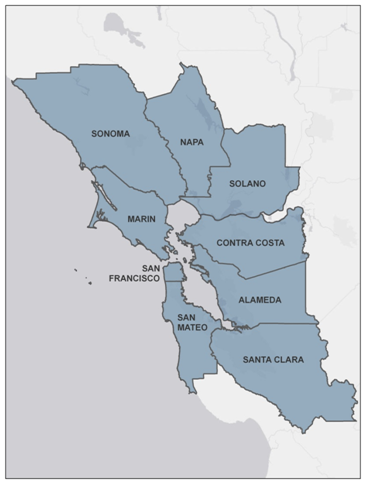 While we wait for the rain to stop and for the market to give some sign of its direction this spring, let’s take a look at what’s going on around us.

We’ll start with a look at single family homes.  I was surprised to see San Mateo running neck-and-neck with SF, and ahead of Santa Clara, Marin, and LaMorinda/Diablo Valley (Diablo).  I suspect that’s both because ritzy communities like Atherton and Hillsborough bring up the median values and because there are relatively few low-priced neighborhoods.  (Compare, for example, Santa Clara County, which along with high-priced Palo Alto, includes the neglected community of East Palo Alto as well as a lot of agricultural land in its southern and eastern parts.)

Big Up, Big Down

The table below looks at how values changed, both up and down, on either side of the Great Financial Crisis (GFC) that started in 2007.  While all counties fell from their peaks, the ones that fell hardest were those that were generally more rural, less affluent, with greater overbuilding, and where buyers were more susceptible to predatory loan practices.  While they roared back from the bleak bottoms they hit in 2009-2011, they still have not reached their pre-bust levels.

Meanwhile, Oakland and Alameda County are interesting points of comparison to San Francisco, especially as many who feel priced out of SF think of moving there.  Both fell significantly further during the crash (-60% and -44%) than San Francisco (-17% for condos, -23% for homes) and have enjoyed spectacular increases since the recovery began.  However, Oakland and Alameda County lag far behind San Francisco if you look at total appreciation from their pre-crash levels to now.  Focusing on Oakland alone, it’s up 12% by that measure, while San Francisco homes and condos have both appreciated over 40%.

In my mind, this is proof of the first three rules of real estate investing:  “location, location, location.”  Other areas will be buoyed by the tide as prime locations are bid up and are no longer affordable, but when the tide ebbs, they will also drop further and take longer to recover.

Here’s an interesting look at the relative heat of different counties based on average overbids.  (We break out Oakland separately, as well as SF homes and condos.)

I’ll leave you with some fascinating charts on demographics for our Bay Area Counties.  For the truly geeky, you can find even more charts and analysis in Paragon’s full Bay Area Market Survey.

As always, your feedback, questions, and referrals are much appreciated!

One Reply to “How Does San Francisco Compare to Other Bay Area Markets?”