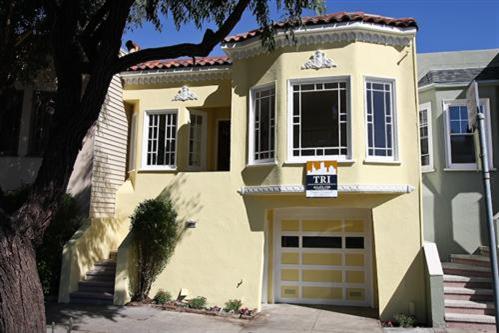 I first saw this house, advertised as a fully remodelled 4 BR, 2BA, Potrero Hill View Home,”  back in October 2009.  With its Spanish Mediterranean, sunny yellow exterior, it had curb appeal, together with terrific if industrial views over the working end of the Central Waterfront and I-280.  The main floor showed started off well, with an open layout, great sun and expansive views.  I don’t recall the exact layout any more, but I do recall that a lot of the home’s square footage, including “an expansive fourth bedroom/media room” and “informal office space” were located on  a lower floor basement conversion that still felt like a basement.

With space so tight in SF, basement conversions are an obvious place to shoe-horn in extra space.  But they have to be done right or they’ll feel cramped and dark.   Most of the time, I’ll take an attic instead.