Happy New Year everyone! As promised, here is a link to Paragon’s comprehensive analysis of trends in the San Francisco residential market and beyond in 2012. You’ll find 19 incredible charts and maps covering a host of metrics and I highly recommend a quick scan of the online newsletter to find the stuff that might interest you. I’m going to cherry-pick just a handful of my favorites to discuss below.

We begin with a look at home values across the Bay Area. Note that these include distressed sales. It’s interesting to see how high the values are in some of the toney suburbs to the south and north of San Francisco. This is not surprising considering their homogeneity relative to SF’s much more diverse market. 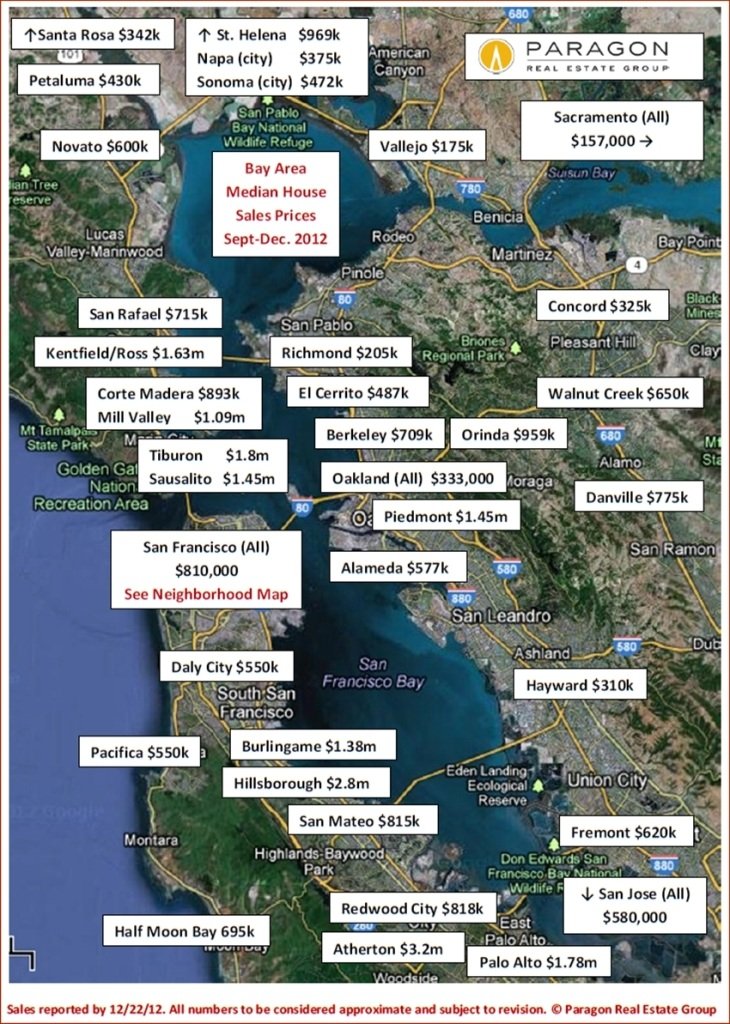 And here are two of my favorite charts for a quick snapshot of homes and condos by neighborhood. Again, these charts include distressed sales, though in SF they exerted much less of an influence in most neighborhoods (the Bayview and southern districts being the exceptions) than in other Bay Area locations that were hit hard by the Housing Bust.

Verses 2011. How did the market fare overall compared to 2011? Generally speaking, and depending on neighborhood and property type, home values increased in the 10% to 20% range compared to 2011, with the city-wide median at right around 15% for both homes and condos. Take a look.

Market Segments and Distribution: With the addition of large new condo developments over the last 10 years, especially around SoMa, condos have become the single biggest component of home sales by property type in the city. With new projects coming online, that trend will likely only accelerate.

I find it rather surprising that TIC’s appear to be such a small part of the market. We don’t have the condo segment broken down by high-rise condo vs. smaller unit condos, but my guess is that if we took out high-rise condos, the ratio of TICs to small-unit condos would be closer. For an explanation of TIC’s (Tenancy-in-common ownership), take a look at my series of blog posts, here.

As for what price range sales are occurring in, take a look at this chart, which counts sales for homes/condos/tics at various price points.

Note that this chart is about as inclusive as it gets. It lumps 1 bedroom condos in with 4 bedroom single family homes and Seacliff mansions in with repossessed bungalows in hardscrabble neighborhoods like Hunters Point and the Bayview, both located in District 10 for MLS purposes. Indeed, some would argue that District 10 does not accurately reflect property values in San Francisco’s “core” neighborhoods. My guess is that leaving District 10 out of the analysis would likely result in this chart showing sales clustered in the $700,000 to $1.2 million range.

The Luxury Market. Back in November 2012, we did a detailed report on the SF luxury market through the 3rd quarter. You can find it here. The year finished strong for this segment, with sales volume at record levels. We can argue about whether a $2 million home should be considered “luxury” in this crazy town, but what’s indisputable is that lots of people are buying them again.

Barring (some of) our politicians running the economy off another fiscal cliff, all indicators point to another strong year for San Francisco real estate. With continued low interest rates and available inventory at record low levels, this is likely to remain a seller’s market for the foreseeable future.

As always, your questions, comments, and support are much appreciated. Don’t hesitate to contact me!