As our oft-quoted Chief Market Analyst, Patrick Carlisle,  says in his recent report, “That sounds really bad.”  It turns out that the sensational headline stories quoted above were largely based on questionable and selective data and then amplified in the media in the ways that we’ve all become accustomed to.  This month, I’m reposting an abbreviated version of Patrick’s report.  The bottom line:  if everyone’s leaving the Bay Area in droves, you’d think it would be showing up in real estate prices.  It’s not – on the contrary, Bay Area prices, including San Francisco, continue to hit new highs.  Read on!

The sources of the data behind the above (and many more) articles: an online survey by a PR company; an analysis of traffic on a real estate website; the alleged cost of a U-Haul to Las Vegas; anecdotal opinions from a handful of venture capitalists on a mid-west bus tour; and new U.S. census data, more often than not selectively or misleadingly quoted to sound most ominous.

Bad news, predictions of crashes, the arrogant finally getting their comeuppance: These stories grab eyeballs and get re-posted on social media. And much of the country finds the Bay Area insufferably smug – its wealth, home prices, unicorns, Google buses, 26-year-old billionaires, liberal politics, and much else – and if it is finally getting its just deserts, that is entertaining news. I get that: Sometimes, I find us insufferably smug myself. But let us investigate the issues a bit deeper.

First of all: Without argument, there are big economic and social challenges facing the Bay Area: high housing costs; high state income taxes; recent federal tax law changes; the hostility of the current federal government to foreign immigration; rising income inequality, poverty and homelessness; growing commute times and other quality of life issues; national and international concerns; and, yes, population migration trends too. This was covered in some detail in our recent report Positive & Negative Factors in Bay Area Markets. It is certainly true that places like Austin and Seattle, with much lower housing costs and no state income taxes, are actively luring our businesses to relocate or expand there, and doing so with some significant success.


But, for a much more realistic illustration of what is going on in the Bay Area, here is some hard data from U.S. Census and CA Employment Development Department data released in March:

More people are NOT leaving San Francisco or the Bay Area than arriving. When you tally both domestic migration and foreign migration, more people are arriving than leaving. It is true than in the past 2 years, domestic net migration has shifted to a net loss, but that deficit is still overcome by the large positive in foreign immigration. Is the shift in domestic migration worrisome? Yes, if it continues to grow. But it is not cataclysmic in its current proportions, and there are further underlying factors to consider, which shall be discussed later in this report. 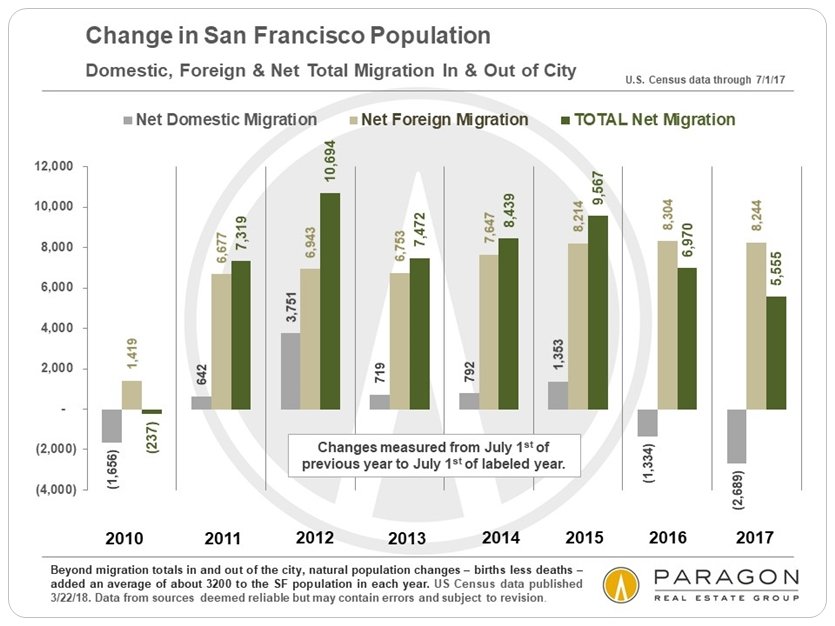 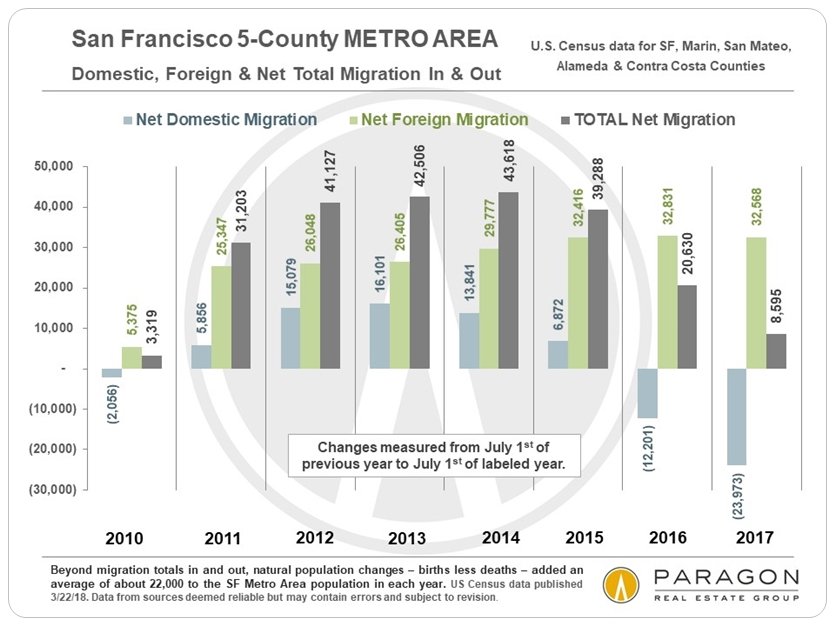 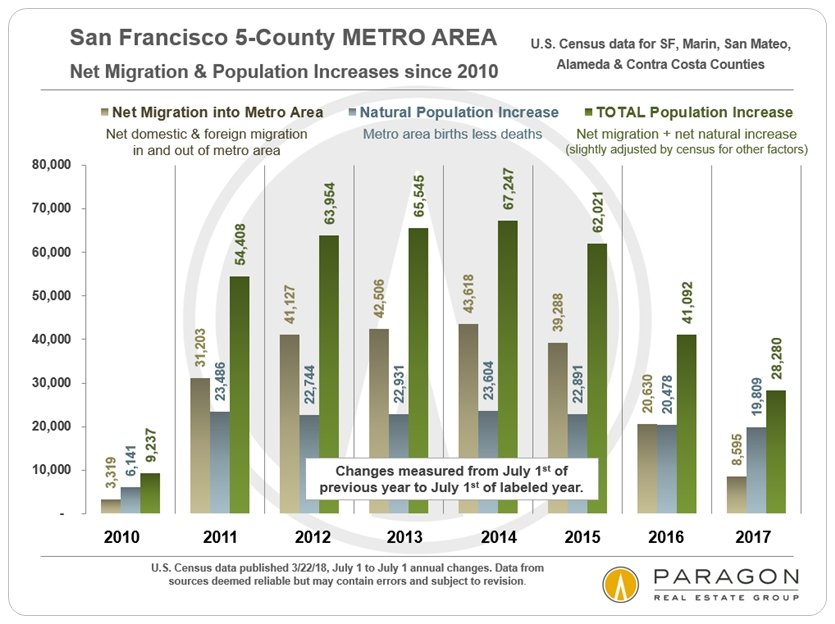 The Bay Area population is still growing both from migration and natural factors (births less deaths), albeit at slower rates than the torrid pace of previous years. As the WSJ admits in its article, SF and SF metro area populations are not shrinking: The SF Metro area population increased by .6% in the last 12 month period, as measured by the census through 7/1/17, which is one tenth of 1 percent lower than the .7% national average. A slower rate of growth than our recent population explosion is actually a good thing, since the Bay Area is bursting at the seams from growth without concomitant improvements in housing supply and infrastructure. 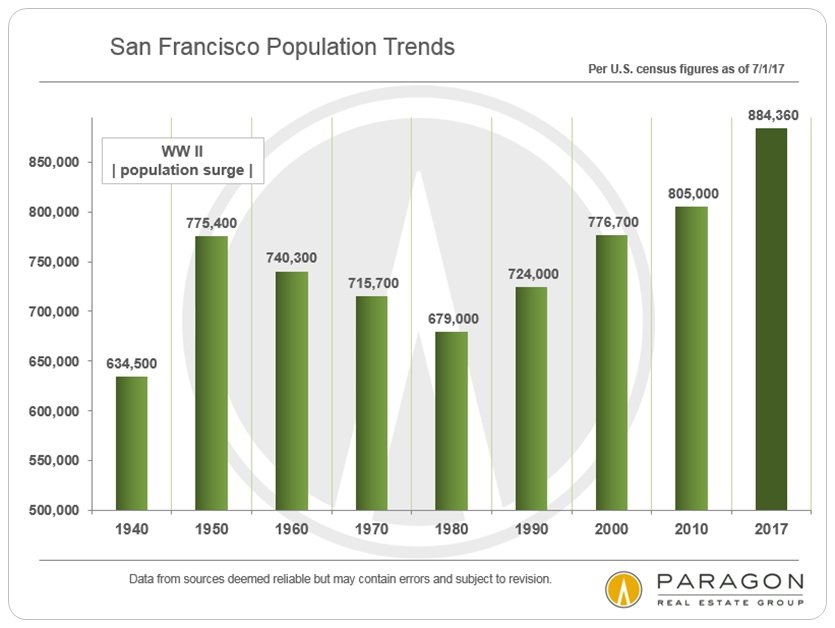 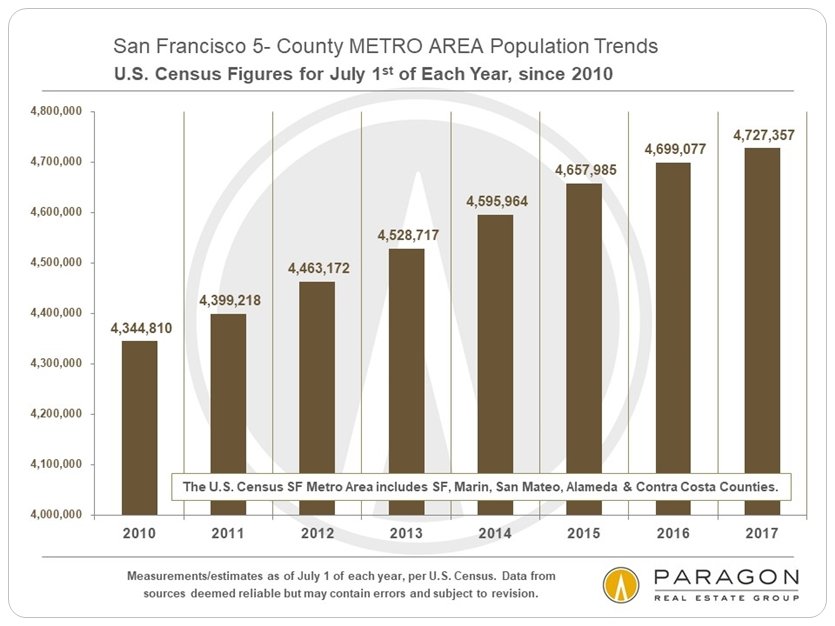 The representation by Business Insider that 49% of residents were looking to move out is simply absurd. Really? Every other person? If people were fleeing or planning to flee in the proportions suggested, one would expect every other home in the Bay Area to sport a “for sale” sign, while the percentage of homeowners selling their homes is actually at historic lows: Less than 2% of SF house owners sold their homes in 2017. (The ratio was higher for condo owners, but still low at something over 4%.) I suppose it is possible that in the frenzy to get away, people are simply abandoning their homes instead of selling them. 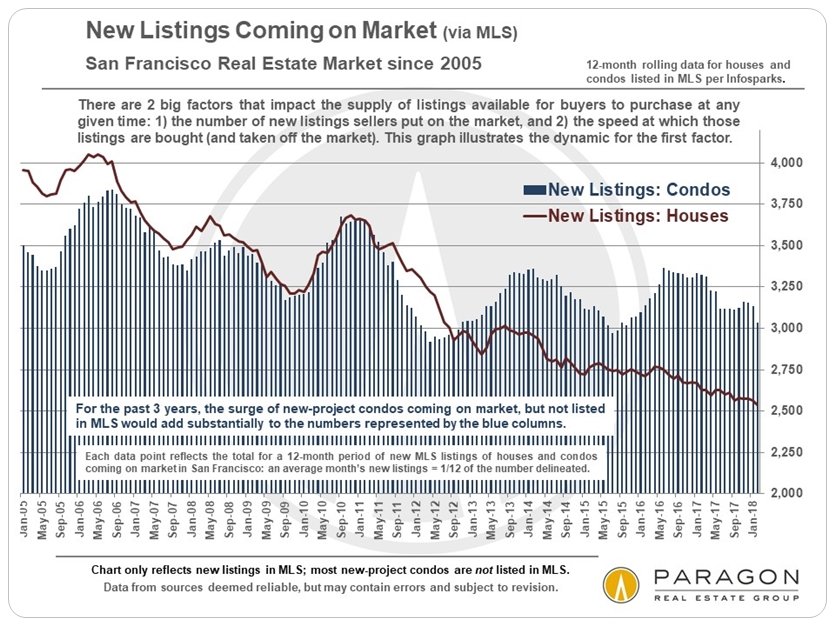 Bay Area employment growth remains extremely strong. According to the CA Employment Development Department, for the six big Bay Area counties (the 5-county SF metro area plus Santa Clara County), no matter which month of 2017 one looks at, the year-over-year increase in Bay Area employed residents ranged from 60,000 to 90,000. As the WSJ notes: “The broader Bay Area is the most robust metro region in the nation in terms of payroll job growth, according to the most recent regional analysis from the University of California-Los Angeles Anderson Forecast, an economic forecaster.”

Some other factors to consider:

The Bay Area over the past 7 years has been one of the greatest new-wealth creation machines in history. With the recent Dropbox IPO, it seems to be cranking into gear again – and there are still dozens of other local unicorns such as Uber, Pinterest, Airbnb, Palantir, with total values in the hundreds of billions of dollars – that could yet go public. Uber has already stated its desire to do so in the near future.

A significant portion of those leaving the Bay area are retirees, cashing out on high home prices to move to less expensive locales, such as other counties in California, and Nevada, Arizona and Oregon. This is not a new phenomenon, as it has been going on for decades, though it may have accelerated in recent years, since cashing out has become so much more lucrative.

Most of those coming to the Bay Area are coming for new jobs, and the Bay Area remains a magnet for many of the best and the brightest around the world. Besides which, every year, thousands of Bay Area students graduate from schools like UC Berkeley, UCSF and Stanford, to take jobs locally as well. Economically, the Bay Area is trading many residents who are, to a large degree, checking out of employment for people in the prime of their working lives. A new 2018 study by BuildZoom (whose accuracy we cannot evaluate) found that the median income of people moving into the Bay Area was substantially higher than that of people moving out: According to the study, from 2010 to 2016, newcomers out-earned relocating residents by about $18,700.

Millions of square feet of new commercial office space continue to be snapped up as soon as they come on market, even before the buildings are finished, and the only possible reasons are new businesses arriving and existing high-tech, bio-tech and fin-tech businesses – such as Google, Facebook, Amazon, Dropbox – continuing to expand, both of which are fueled by continued hiring.

Last, but not least, neither Bay Area home prices nor rents have, so far, been dropping – most median home sales prices jumped in 2017 and early 2018, and rents stayed relatively unchanged – which one would expect to see if the doom-laden media articles were correct in their analyses. 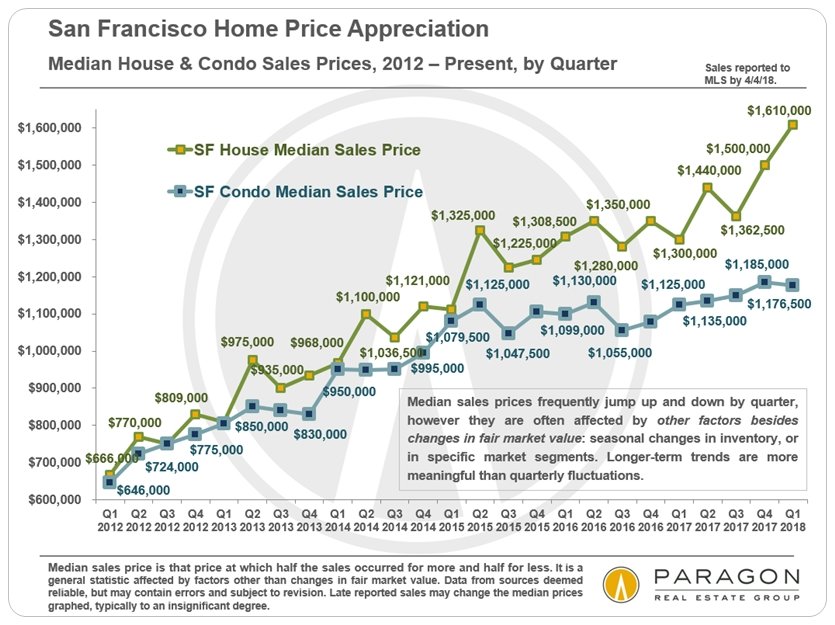 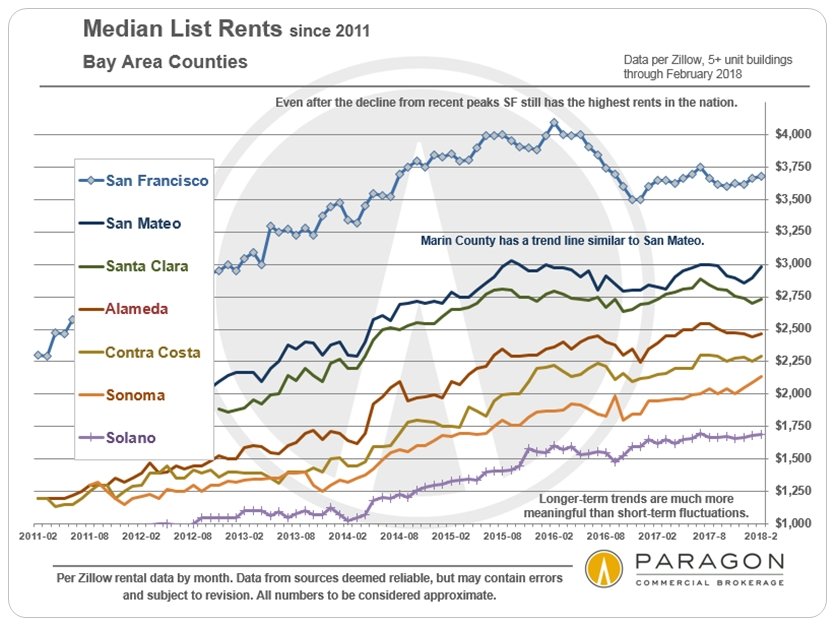 The Bay Area certainly has substantial economic, social and demographic challenges to face and it is not sure it will overcome its problems. And it is true that people and businesses are moving out in greater numbers than any time since 2002. But, on the other hand, start-ups continue to start up by the

hundreds, local business continue to expand, and the Bay Area undoubtedly remains one of the most innovative and dynamic economies in the world.

And despite all its faults and problems, it is still, in my opinion – and the opinion of most of the people I’ve met around the Bay Area, the country and the world – one of the great metropolitan areas on the planet.

As always, your questions, comments, “likes” on FB/LinkedIn, and referrals are always appreciated!

3 Replies to “Will the Last One Leaving the Bay Area Please Turn Out the Lights?”