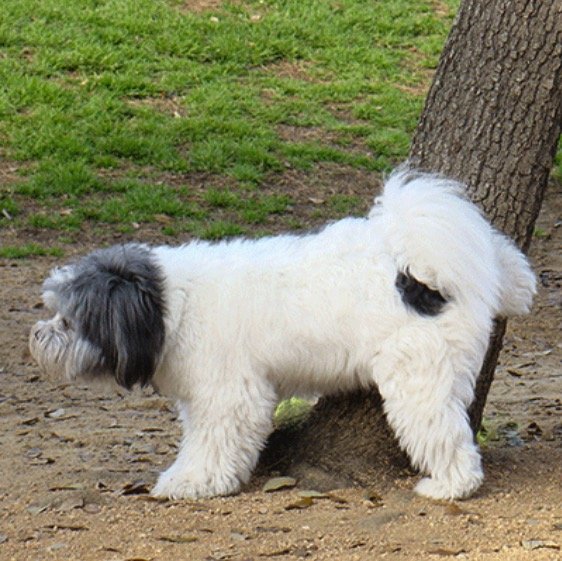 Every year we publish an in-depth look at San Francisco and the Bay Area told almost exclusively in charts.  The focus is not on real estate but rather on who we are, what we do, what we believe in.  While some of the charts simply confirm widely-known data– for example, that Asians as a group represent the largest minority in San Francisco (33.5%) — others reveal the most obscure and amazing things.  For example, did you know that there are almost as many dogs in San Francisco as there are trees?  Coincidence you say?  You can find all 32 charts, with links to dozens more, here.  I’ve cherry-picked some of my favorites below (Click the charts to expand them). 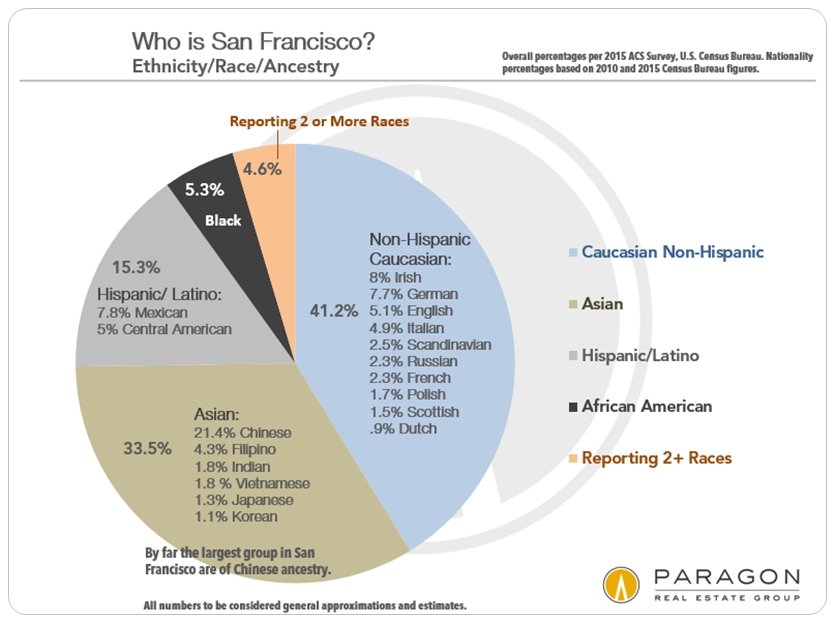 Surrounded by some of the top educational institutions in the country, it’s no surprise that San Francisco is also one of its most well-educated and affluent cities.  In fact, as of 2016 the Bay Area has the highest median income of the most populous metro areas in the country (second chart).  However, the discrepancy between rich and poor is also stunningly high (third chart).  If the Bay Area were a country we would rank 23rd in the world – between Mexico and Paraguay – for inequality of income based on an index measured by the Organization of Economic Cooperation and Development. 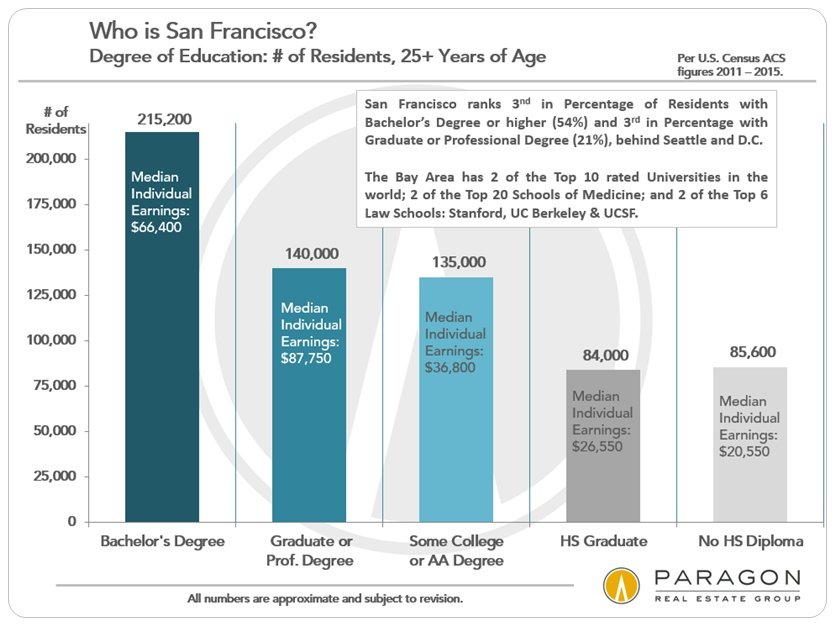 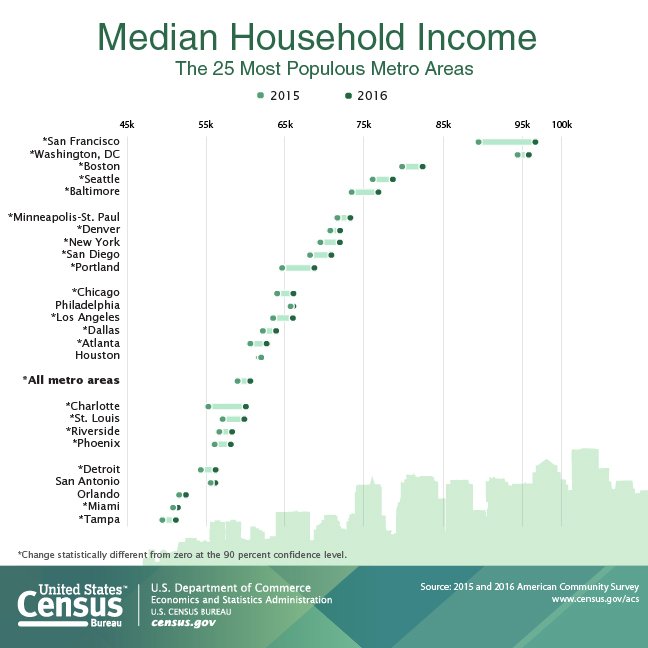 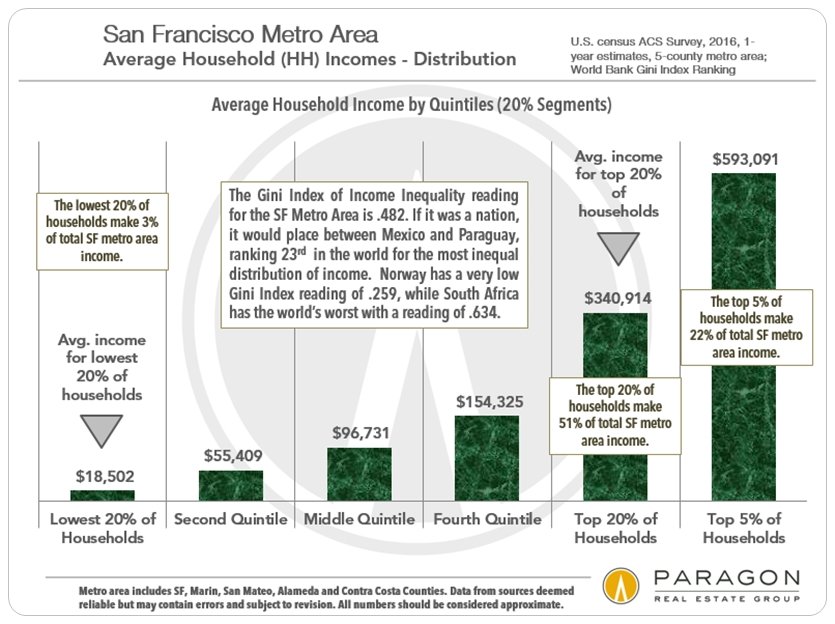 The average salary for a Bay Area bus driver is $53,390.  They make slightly more than clergy and slightly less than reporters.  Elementary school teachers make $74,490.  Computer programmers average $106,710 while real estate brokers average $115,490. Registered nurses make about $125,000.  Doctors, dentists and other medical professionals top the rankings at $200,000 or above, along with airline pilots and chief executives.

Of the 555,000 employed residents in San Francisco, nearly 20% of them are employed in local, state and federal government.  Wow!  That’s almost double the number employed in the retail trade. 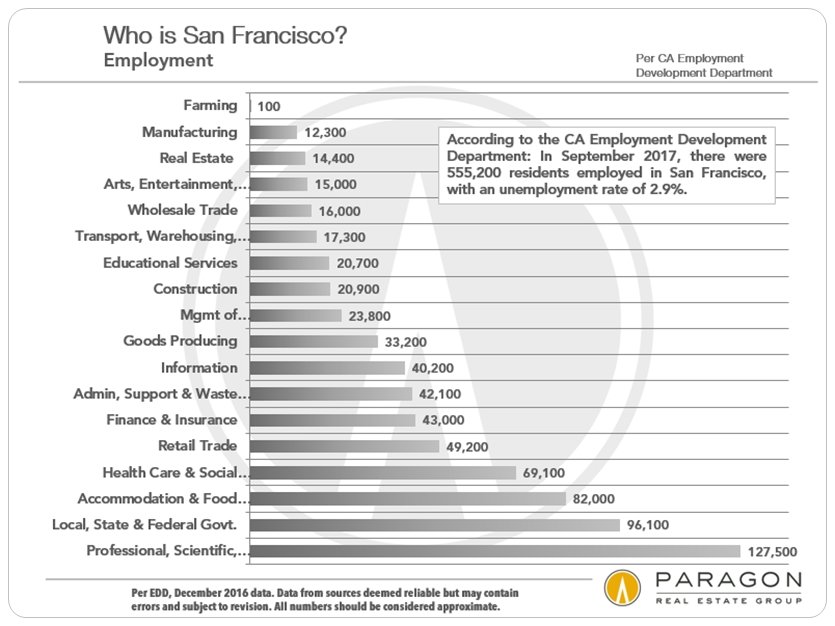 Here’s a stunner: 81.7% of San Francisco households do not include children. No wonder then that we have the smallest percentage of residents under the age of 18 of any major US City (second chart).  37.8% of SF’s residents live alone – far higher than the national rate of 22.6%.  The LGBT population is 15.4%, vs. a national estimate of 4%. 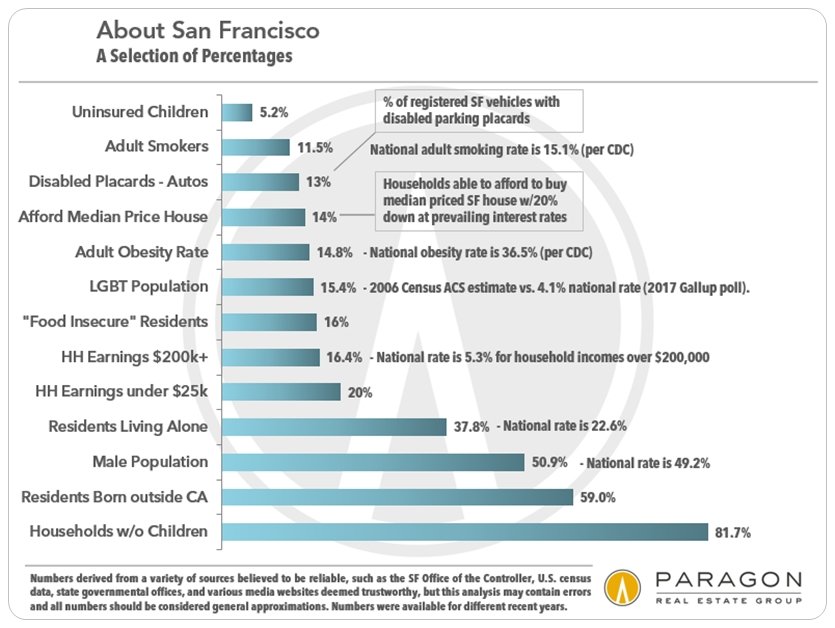 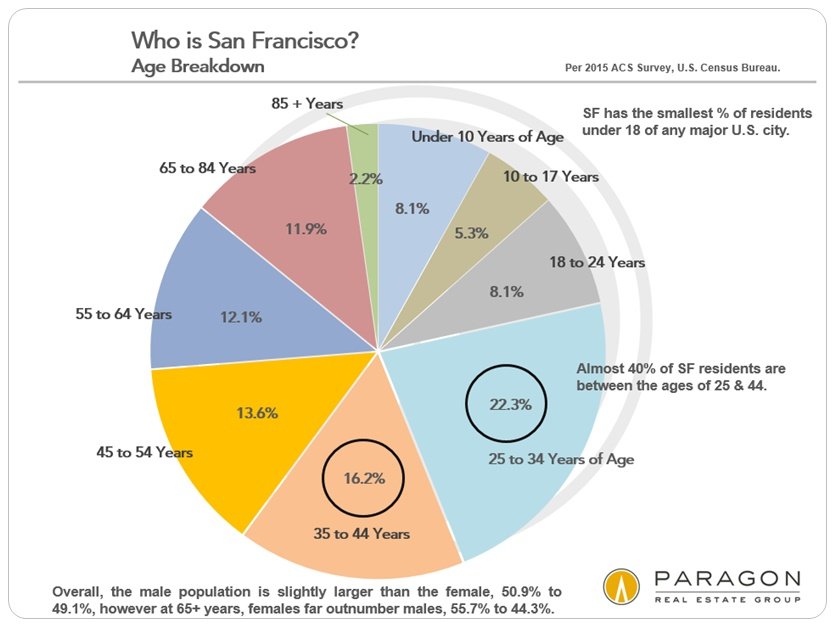 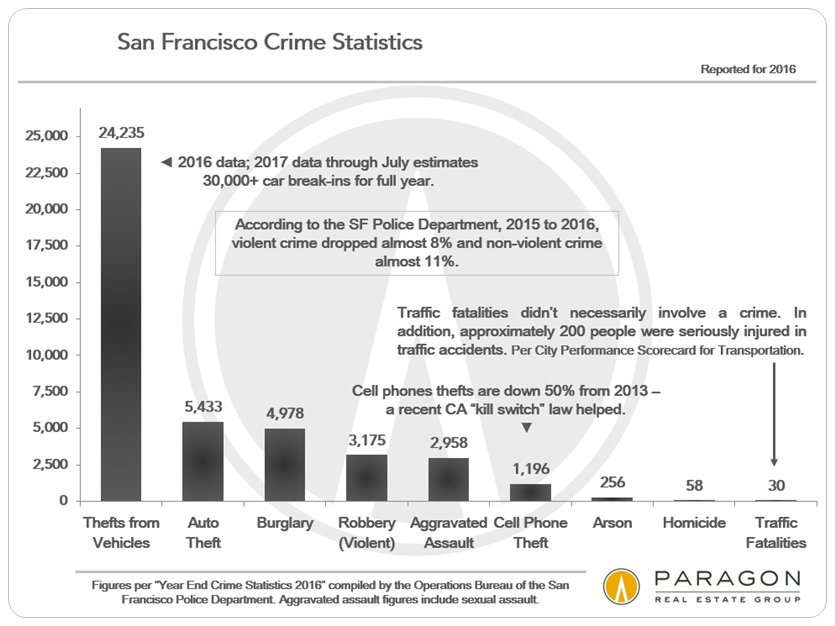 About a third of San Francisco residents take public transport to work, the same number as drive alone.  330,000 non-residents commute into the city for work each day.  That’s on top of the city’s own 550,000 employed residents, of whom a quarter commute out of SF.  In 2015, the average one-way commute time was 32 minutes.  According to a recent article, that puts us second only to Washington DC as the worst in the nation.  New York and Los Angeles have shorter commutes than we do. 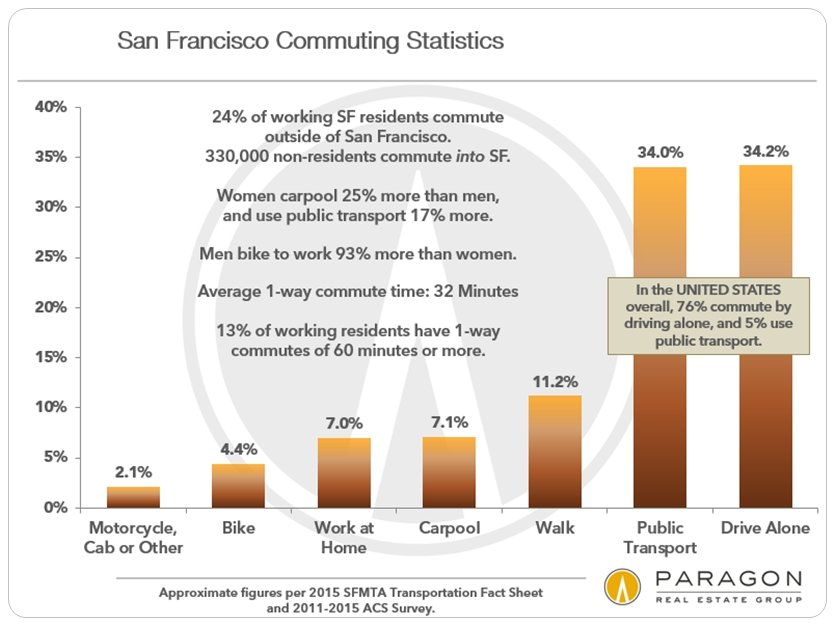 Here are a couple of charts on real estate.  The first chart’s breakdown of owner-occupied housing by zip code is not surprising – St Francis Woods tops the list; Hayes Valley/Tenderloin is at the bottom.  But take a look at some of the other statistics:  about two-thirds of households nationwide own their own homes; in San Francisco only 36% do.  About 64% of San Francisco’s housing units are rentals, with over 80% of them subject to rent control. 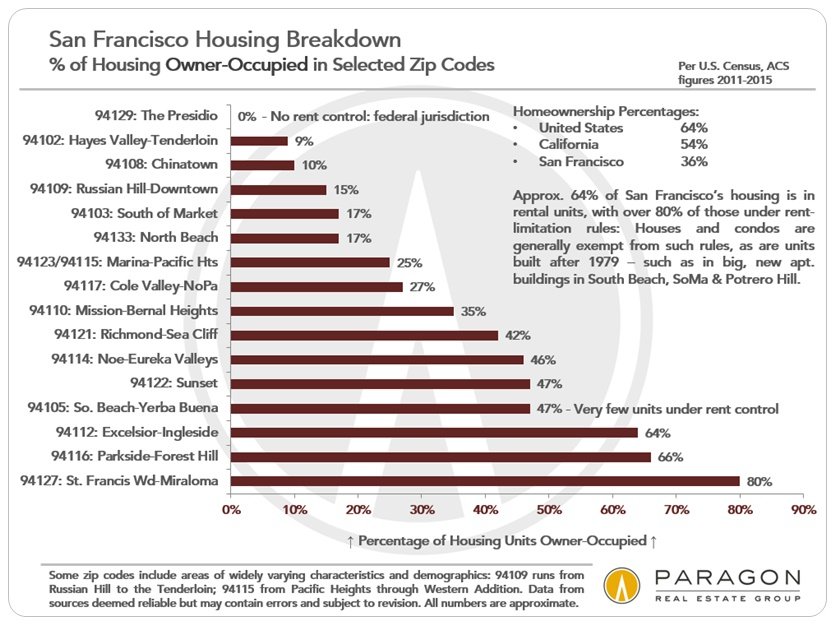 It takes a minimum qualifying income of $303,000 to purchase a median-priced house of $1.5 million  in San Francisco.  No Bay Area county is more expensive.  Yet for the moment, housing affordability is still slightly better that it was at the peak of the dot-com boom in early 2001 and significantly better than immediately prior to the start of the Great Recession in 2008 (second chart). 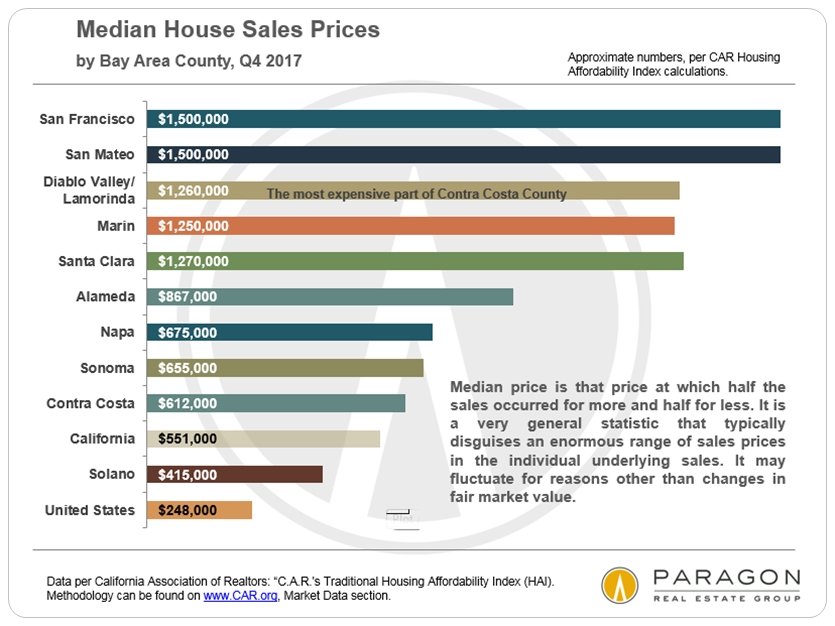 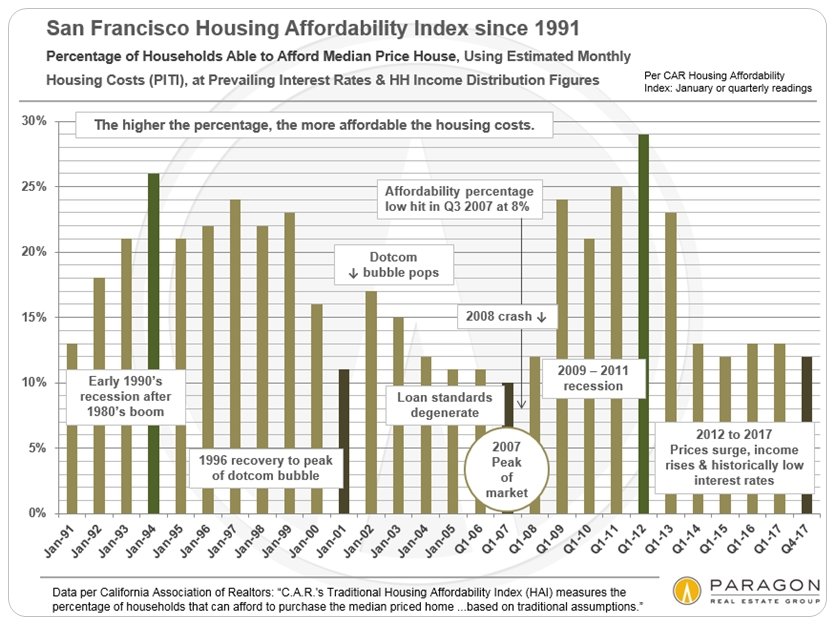 A Sense of Wonder

What’s the takeaway from all this data?  We live in an ethnically-diverse, well-educated, affluent, dog-loving, crazy-expensive town where a little over a third of us pray at least daily and about the same number meditate at least once a week.  44% of us feel a weekly “sense of Wonder” about the Universe.

Count me in that group. 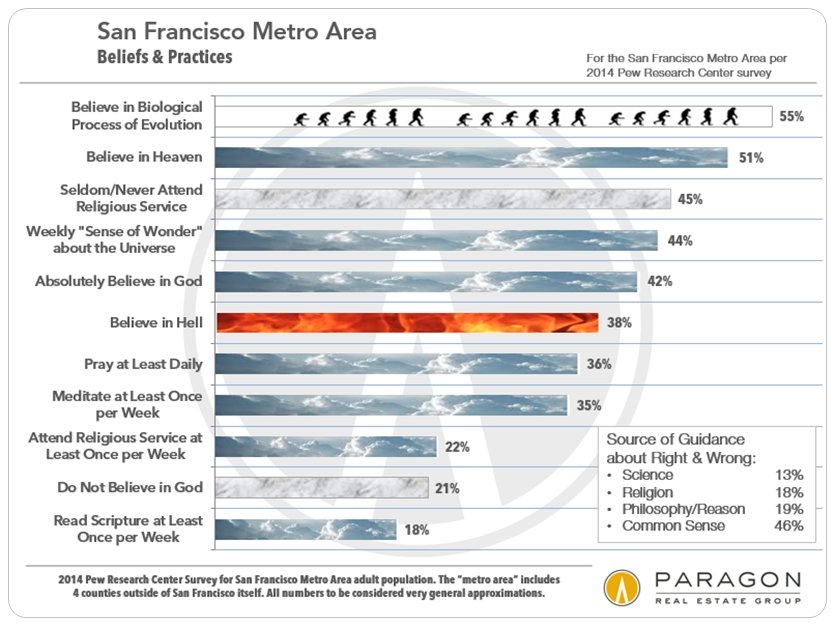 One Reply to “Who is San Francisco?”