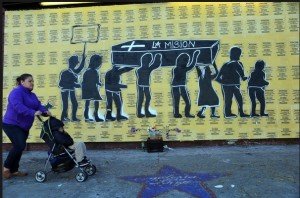 Today’s NY Times front page article on the effect that San Francisco’s tech boom is having on economic diversity in SF is tough reading for those of us who earn a living in real estate. Who wants to read that a 98 year old woman is being evicted from her rent-controlled apartment or that a founder of Galeria de La Raza and his partner, who is battling cancer, are being evicted from an apartment that they’ve occupied for decades?
But with the tech boom — or more specifically, the social media tech boom — having definitively moved north from Silicon Valley in the last few years, there’s little doubt that finding a place to live in San Francisco has become a lot more expensive. Previously affordable neighborhoods like the Mission are gentrifying rapidly, with hip hangouts, coffee bars and eateries replacing the authentic Hispanic taquerias and bars of yesteryear.
Is this a good thing? Personally, I certainly believe that economic diversity is essential to the long-term health of any city. What I don’t know is how far regulation should go to protect it, nor whether regulation doesn’t create its own set of inequities.
But for those looking to buy a home in SF, here’s a noteworthy statistic from the article: there’s an estimated 1600 newly-minted millionaires as a result of Twitter’s IPO. Considering that there have been only around 440 sales of homes and condos over $2 million so far this year, it’s hard to imagine that the top end of the market is going anywhere but up. That’s bound to have a trickle-down effect on more moderately priced homes, and indeed, based on the prices I’m seeing in formerly affordable areas like Glen Park and Bernal Heights, I’d say the trickle is turning into a flood.
What affordable areas are left in this city of just 49 square miles? Go west young person, or south. But hurry!