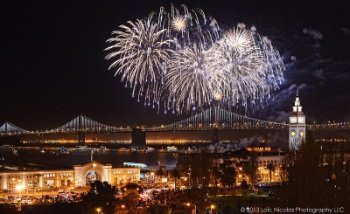 Happy New Year, one and all! What happened in San Francisco real estate in 2014? Three years into SF’s booming recovery, inventory remains at record lows and prices approach or exceed record highs across most of the city. End of story. Goodbye.

In some respects, the story really is that simple. But here at RealDataSF we know our readers want the details. So in this month’s issue, we’ll look at what’s

going on from various angles to provide a multi-faceted picture of the market. Below is a grab bag of charts culled from around 50 hours of analysis by Paragon Real Estate Group’s Chief Market Analyst, Patrick Carlisle, who’s been getting a lot of press for his work. His full report is available here. 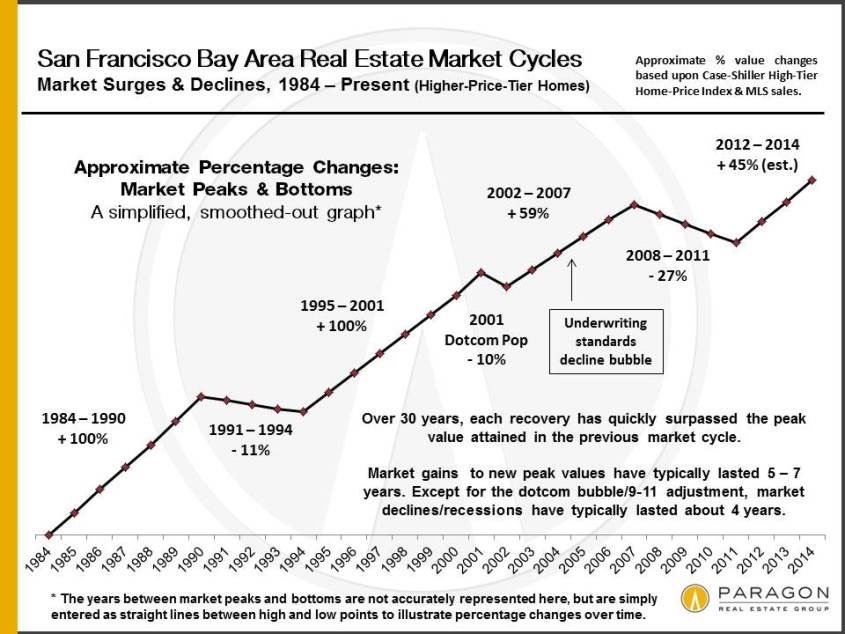 The SF Bay Area as measured by the Case Shiller Index is up 45% since the recovery began at the start of 2012. For those who say “this can’t continue,” a thirty year view suggests that indeed it may — for a few years. We are 3 years into the current upward cycle; historically they last 5 to 7 years. Will this one? I’ll stick my neck out and say that it’s hard to see anything currently on the horizon that suggests an imminent collapse. A slowing in the rate of appreciation, sure. A 5-10% correction, maybe. But with interest rates low, continuing low supply and SF’s local economies continuing to mint new millionaires and attract record numbers of new people to the city, I believe that this sellers’ market will probably continue for at least a few more years.

As this second chart shows, it’s true that we are somewhat ahead of past recoveries in terms of appreciation in the first three years. However, we are also coming off a steeper drop. That may explain it. 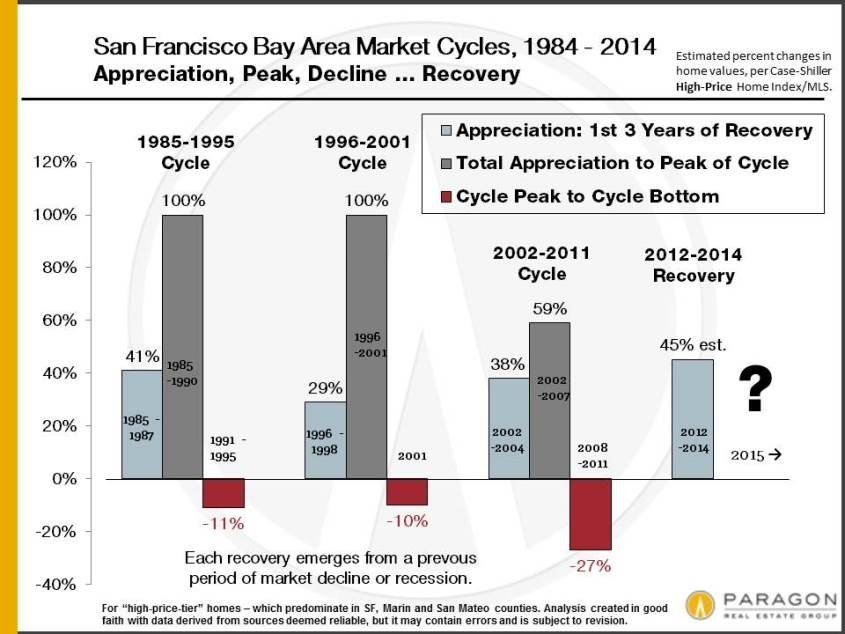 Our market analyst uses this chart below to illustrate seasonal fluctuations in house price appreciation. (Condo prices in the city followed a similar trajectory, though at somewhat lower values – they ended at just under a $1 million.)

I like this chart, however, because unlike the ones above it’s based on sales within San Francisco alone. It shows that between Q1 2012 and Q4 2014, home prices have surged 70%. Year over year, they’re up 20% over the fourth quarter of 2013.

It’s worth noting that the chart includes distressed sales, of which there were many more at the cusp of 2011/2012 than now, when they’re are virtually none. If you stripped out distressed sales, the percentage increase over the 2012-2014 period would be somewhat lower. In a separate analysis, we determined that the increase for combined non-distressed condo and home sales was around 45%. 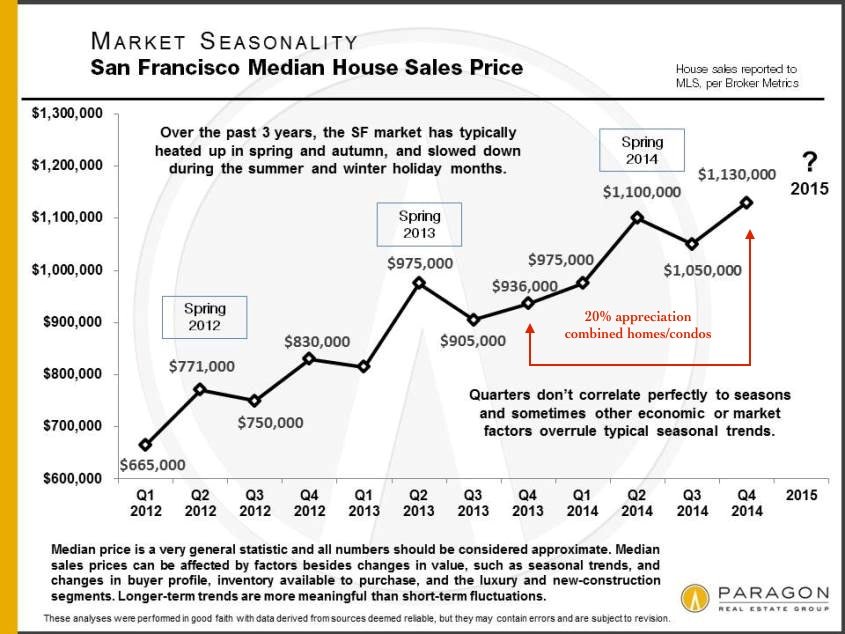 Here’s one chart from our regularly updated series, Where to Buy a Home in San Francisco. The most affordable neighborhoods tend to be clustered in the south-east quadrant of the city and fall within MLS District 10. This area got hit hard in the housing bust, but has come roaring back. 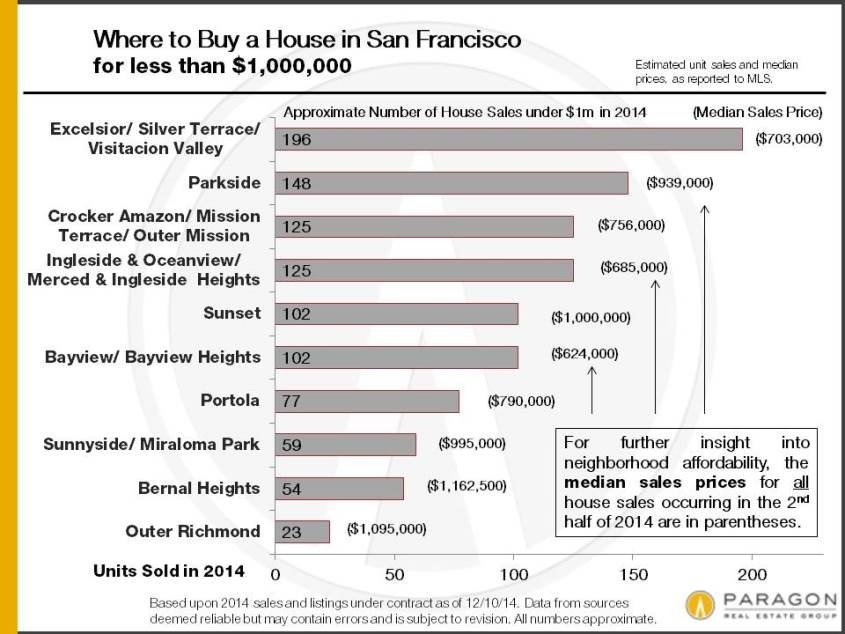 As for condos, sales volume is greatest in our newest canyons south of market and in Mission Bay. You can pretty much assume that you’ll be paying $1,000 to $1,200 per sf for a no-frills condo in one of these newer buildings. Despite the gorgeous marketing you don’t get much. Entire bathrooms – and sometimes bedrooms as well – are migrating to closets with frosted doors. Perhaps this will be the future.

If you can afford a jewel box in the sky with a view and all the perks, expect to pay $2,000 per sf or more, well above the average prices shown in the second chart below. 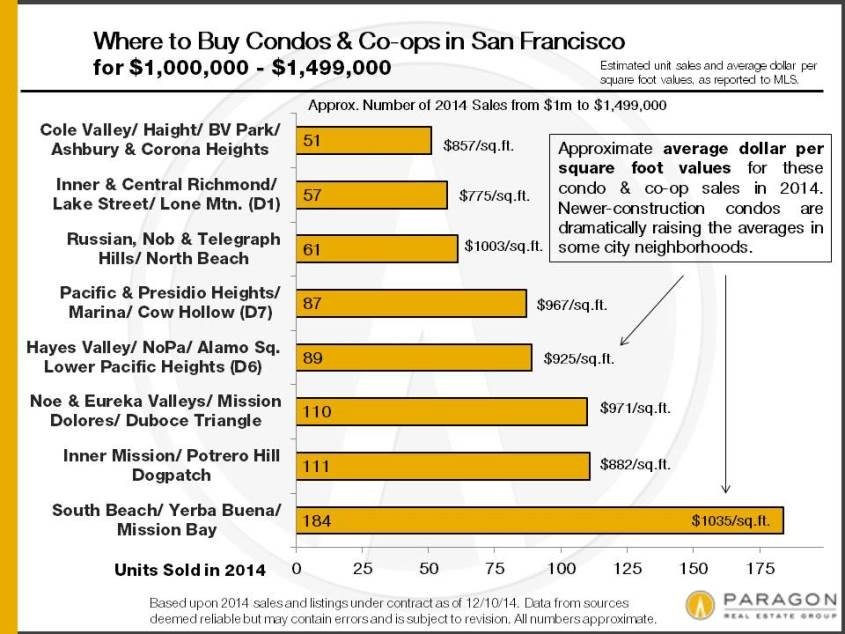 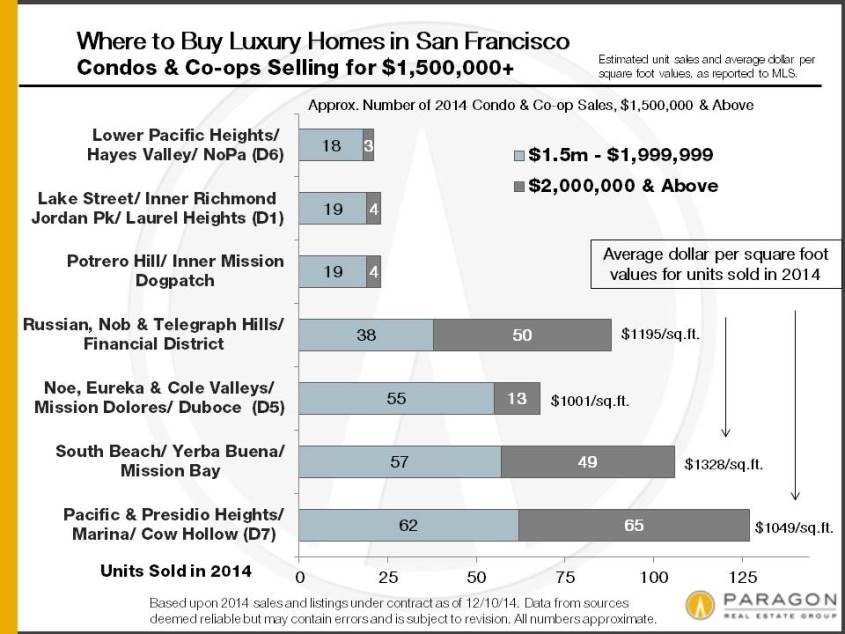 Over the past 3 years, the luxury home market has outperformed the overall market as wealth dramatically surged in the Bay Area. In the last 15 years or so, the high-end has been spreading from the classic, northern prestige neighborhoods – Sea Cliff, Pacific Heights, Russian Hill – to other neighborhoods around South Beach and Noe Valley. The upward pressure is now spreading to areas previously considered less desirable as people trade location for space and new construction. Some of these areas – Westwood Highlands, Balboa Terrace, for example – are subdivisions dating back to 1925, with lovely marina-style detached homes on smaller plots of land. Personally, I think these are some of the last neighborhoods in the city where you can still find “value.” 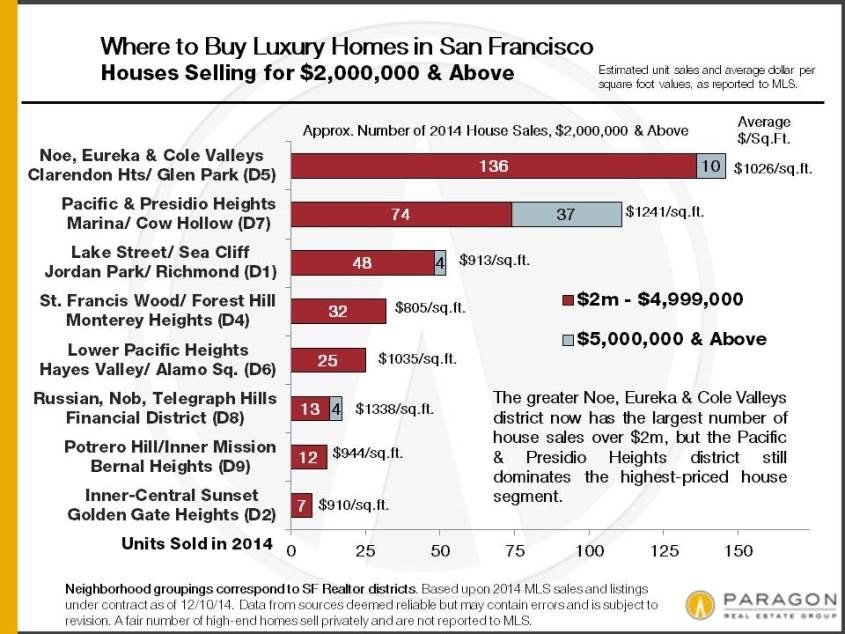 Low inventory remains a huge issue. Typically, the year begins with the lowest number of listings, which then gradually increases into spring. In the past 3 years, buyers have woken up from the holidays much more quickly than sellers have put their homes on the market. This set the stage for the city’s early spring market frenzies in 2012, 2013 and 2014. In the second half of 2014, home prices plateaued or even dropped a little in the more expensive housing segments, while continuing to tick up in more affordable areas.

In fact, as the next chart shows, inventory levels appear to be declining. And that’s despite all the new condos coming onto the market. Why this might be the case is hard to know. It may be that high prices are discouraging current owners from moving “up” so they are deciding to stay put and improve their existing homes instead. 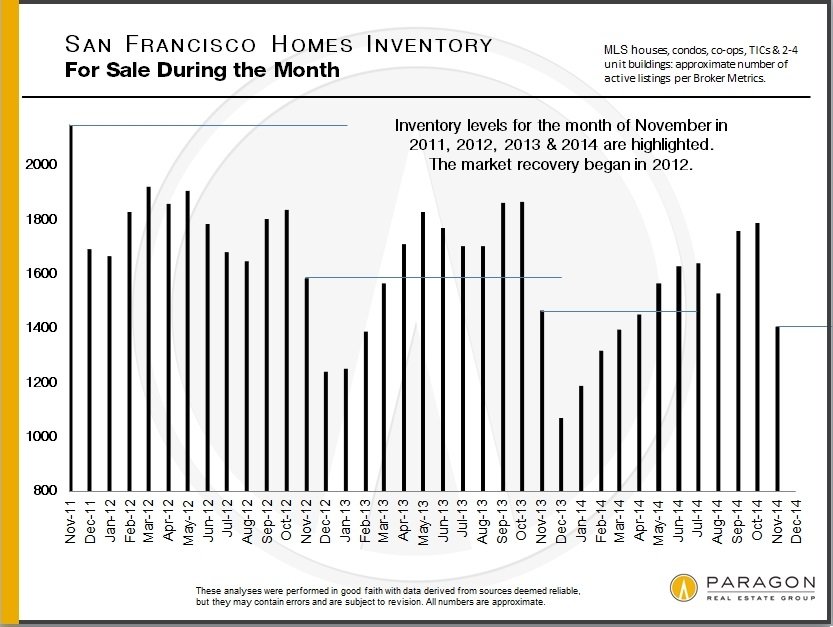 One of the big factors underlying the market’s strength in recent years has been extraordinarily low interest rates, which have a tremendous effect on the ongoing, monthly cost of housing. In 2010, pundits almost universally predicted interest rates would rebound to 6% or higher, but instead rates dropped until hitting a low point in mid-2013 of about 3.5%. After fluctuating up and down a bit since, interest rates at the start of 2015 were somewhat below 4% – incredibly low by any historical standard. Even with an interest rate increase widely predicted by mid-2015, no one seems to be expecting a massive or rapid rise. 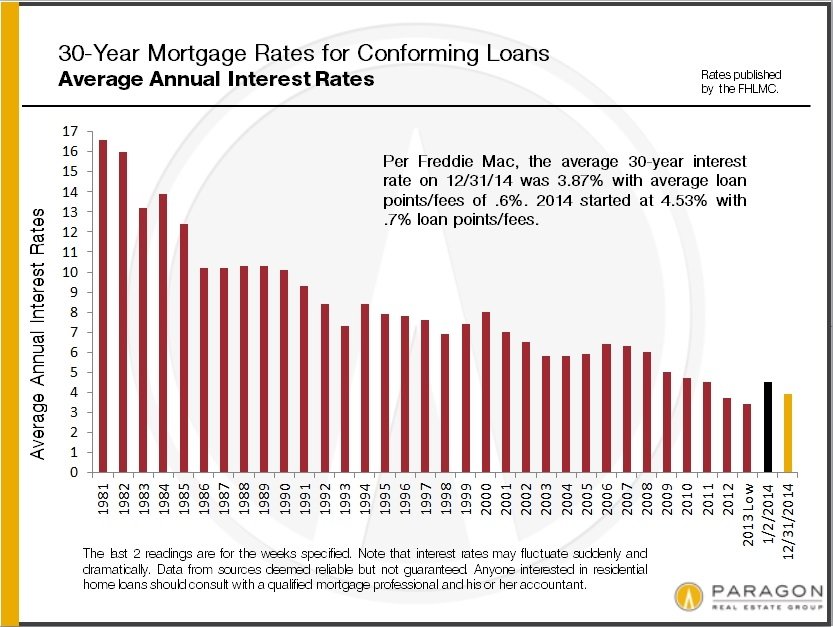