The small decline in the Index reading from December 2012 to January/February 2013 is due to seasonal market factors, not a decline in values, and occurs every year. Generally speaking, January and February sales reflect offers accepted in the holiday … Continue reading →

The just released Case-Shiller Index reading for January for the high-tier price segment of the 5-county San Francisco Metro Statistical Area declined slightly from December. This reflects seasonal market issues, not a decline in values, and it occurs every year … Continue reading →

For the high-tier price index, there was virtually no change from August to September, though the lower price tiers continued to increase (these tiers are especially affected by the decline in distressed home sales). Here are 2 updated charts if … Continue reading →

The National Association of Realtors (NAR) reported yesterday that existing home sales in October rose to their highest level in more than two years.  Nationally, sales were up 10.1% over September and up 23.5% year over year.

Most of the increase in sales, however, was not in the western region, where sales were  only up 1.6% from the previous month.  (Oh, the devil is always in the details.)  And more “good news”:  The western region median price of $220,200 — clearly this is not San Francisco — was down 14.7% year over year. ...  Additional Details 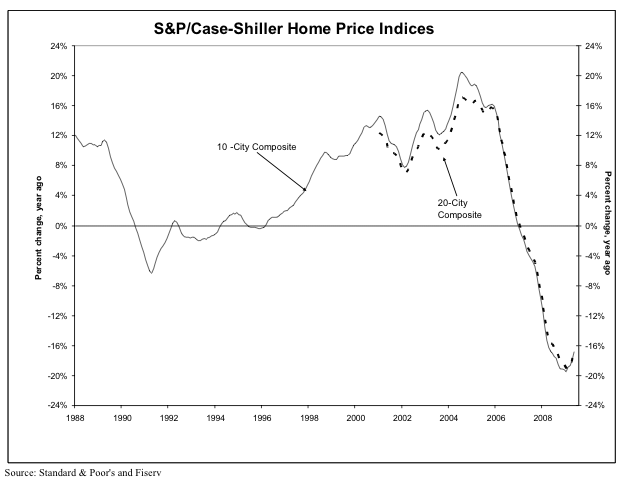 Case-Shiller published its closely watched indices yesterday.  Hooray! The broadest CS index shows that the rate of decline in the nation’s largest housing markets has reversed in recent months.  Now we’re only going down 16% year over year instead of 20%.

They also point out that we are now back to 2003 values, which also holds true of San Francisco.  Here’s my chart from an April blog: 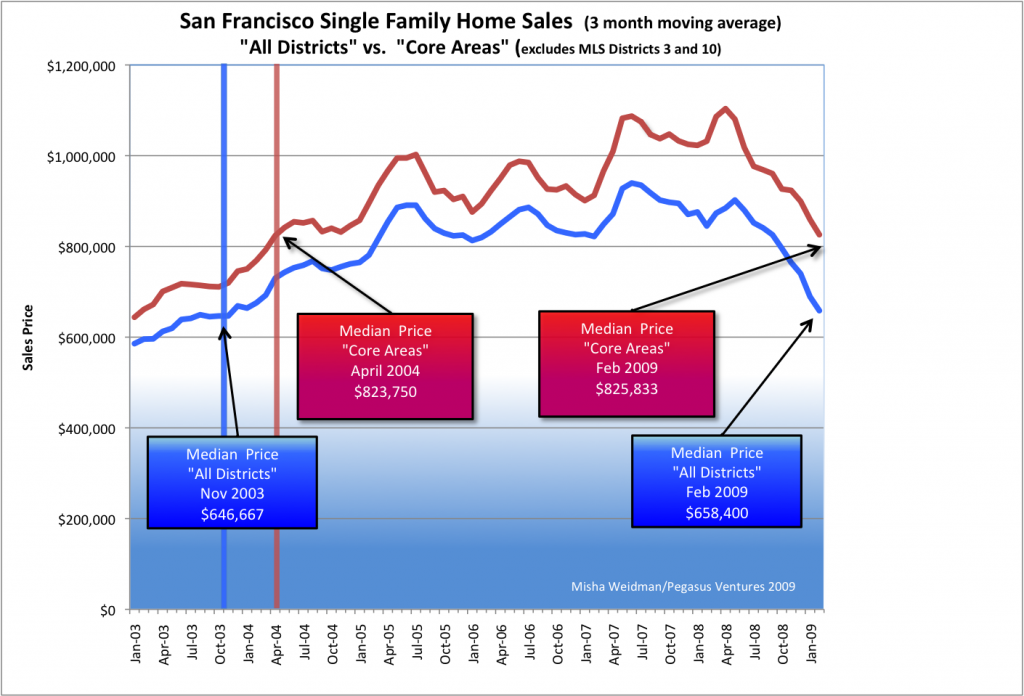 Before you go out and celebrate, Case-Shiller has “San Francisco” down a whopping 26.1% year over year.  Why the quotes?  Because it’s really the “San Francisco-Oakland-Fremont, CA Metropolitan Statistical Area” and it includes ALL of Alameda, Contra Costa, Marin, San Mateo, and … San Francisco County. That’s 5 counties folks, a factoid often omitted even by such august publications as the New York Times (see today’s front page article). ...  Additional Details

For the quarter century (gulp!) that I’ve been involved in real estate, the conventional wisdom has always been that condo values generally do worse in down markets than homes.  Why?  To be honest, I’m not sure, but I think it’s because it’s easier to overbuild the condo market than the single family home market.  It goes back to that famous quote:  “Buy land – they aren’t making any more of it.”  Just take a look at Miami, Chicago – or downtown San Francisco.  One new high-rise can hold hundreds of condos in the sky.  Try building just one new home in SF, let alone hundreds – it aint happening.Of course, more supply  + less demand in a down market means prices fall.  Has that been the case in San Francisco? ...  Additional Details

The day after I posted my take on the Case-Shiller Index, they came out with July’s report (they’re always trailing three month averages) showing a continuing decline in the San Francisco MSA.  Wait for it:  down 27.3% from July 2007.  Are we worried?  Not that much.  Why not?  Read my October 27 blog:  “San Francisco” means most of the Bay Area when it comes to the Case-Shiller Index.

You want scary?  Median prices are down 45% year over year in Contra Costa County. ...  Additional Details