and/or Average Dollar per Square Foot Values above $1000

The San Francisco 5-county metro area had the biggest gain in home
prices among the 20 largest national metro areas according to the
April S&P/Case-Shiller Index released on June 25th, increasing 24%
year over year. We expect to see another bump in May’s Index
reflecting the acceleration in home price appreciation that began to
show up in March. By itself, San Francisco is the only county in the
state to exceed previous peak values set in 2006-2008, according to
Leslie Appleton-Young, chief economist for the California Association
of Realtors. It should be noted however that this does not yet apply
to every neighborhood in the city.

Looking toward July and August, it is not unusual for median sales
prices to fall during the summer due to seasonal factors related less
to changes in value than to inventory available to purchase and buyer
profile. 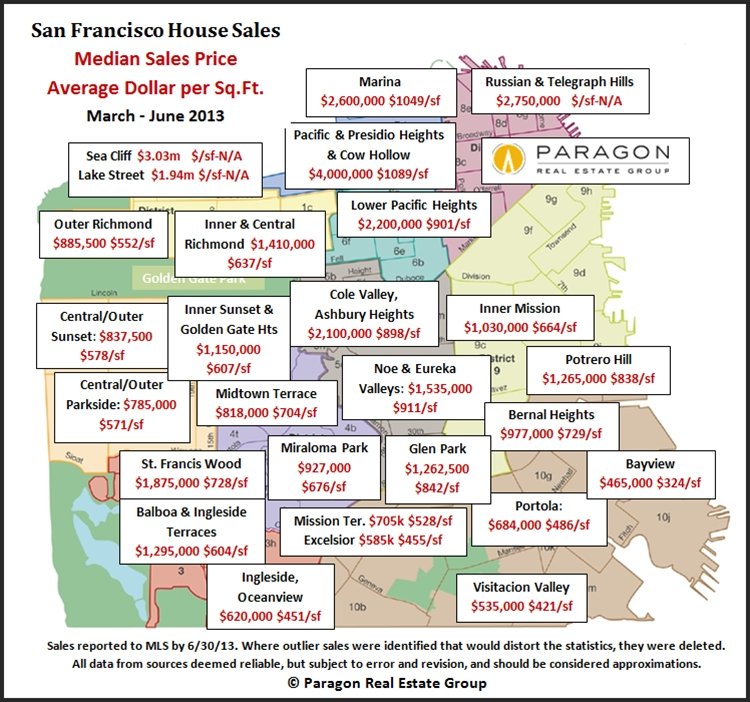 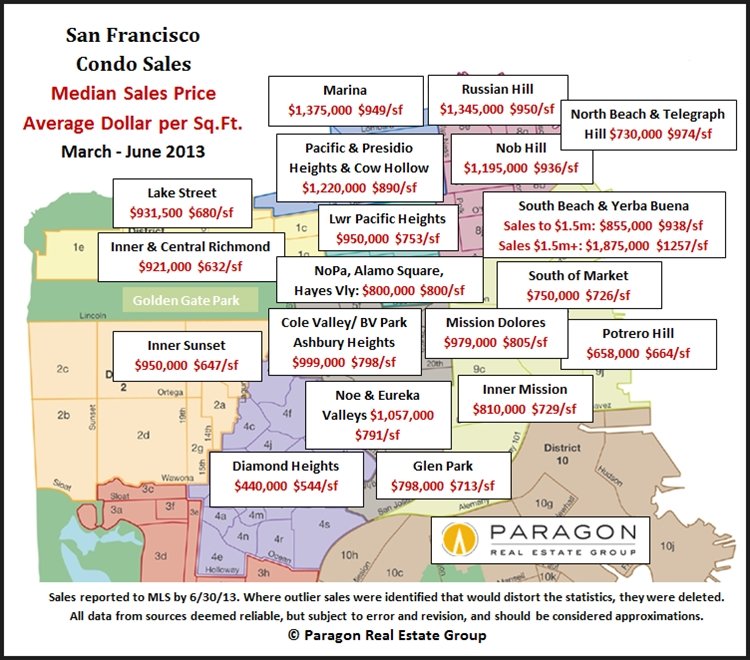 Median sales prices and average dollar per square foot values often
disguise an enormous disparity of values among the underlying
individual home sales in the data set, and how they apply to any
particular property is impossible to say without a specific
comparative market analysis (CMA). Please call or email if you’d like
a quick CMA performed on your home or one you’re considering
purchasing.

MEDIAN SALES PRICE is that price at which half the sales occurred for
more and half for less. It can be, and often is, affected by other
factors besides changes in market values, such as short-term or
seasonal changes in inventory or buying trends. The median sales price
for San Francisco homes (in all their almost infinite variety) is not
like the price for a share of stock (all the same), and short-term
fluctuations in median price are common and often meaningless.
Consistent, long-term trends are most meaningful.

AVERAGE DOLLAR PER SQUARE FOOT ($/sf) is based upon the home’s
interior living space and does not include garages, unfinished attics
and basements, rooms built without permit, lot size, or patios and
decks — though all these can still add value. These figures are
usually derived from appraisals or tax records, but are sometimes
unreliable or unreported altogether. All things being equal, a smaller
home will typically sell for a higher dollar per square foot value
than a larger one. Generally speaking, about 60-80% of listings report
square footage, and this statistic is calculated on these listings
alone.

The neighborhoods in the maps above were chosen because their volumes
of sales were considered sufficient to generate meaningful statistics.
We began with sales closing in March because they generally reflect
offers negotiated in early 2013, when market dynamics went through
another shift. When medians and averages are being calculated for a
wide variety of properties of different locations, sizes, eras of
construction, amenities and condition – as is almost always the case
in San Francisco – they can only be considered very general
approximations of value and changes in value.