The luxury segment of San Francisco’s real estate market was the last to peak, in 2008, while most other housing segments started to lose steam in 2006-2007. After the financial markets crash in September 2008, the city’s high-end home market generally lost the least value on a percentage basis, 15-20%, as compared to the 20-60% drops seen elsewhere. Then it was the first to recover in late 2011/early 2012. Now, SF luxury home values have accelerated well past the previous peak values of 6 years ago. The factors include the increasing strength of the Bay Area economy; the huge, local surge in high-tech and affiliated wealth; an increase in well-heeled foreign buyers; and the fact that the highly affluent have, by far, profited most from the recent, tremendous appreciation in stocks and other financial assets.

The net result: There is an enormous amount of new and old money sloshing around the Bay Area looking for beautiful homes to buy, many of which are being purchased all-cash.

Luxury homes in San Francisco are typically defined as condos, co-ops and TICs selling for $1,500,000 and above, and houses selling for $2,000,000 or more. These are relatively arbitrary thresholds since $2,000,000 might buy a small-ish, fixer-upper house in Pacific Heights or a large, gracious home in another neighborhood. It is also true that the significant appreciation since 2011 has simply moved more sales into the “luxury” price category, which at current trends will soon require reassessment. 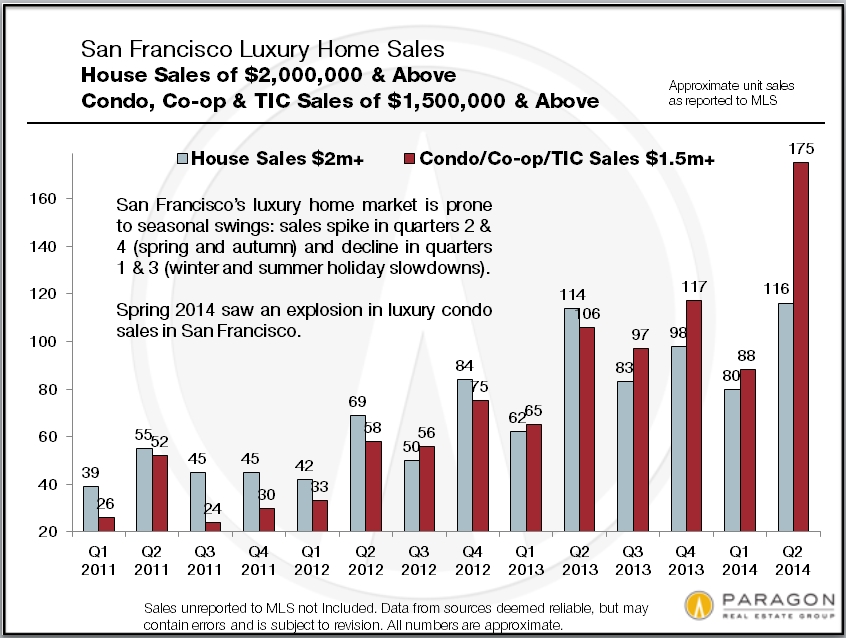 Average dollar per square foot is a very general statistic, but this chart gives an idea of the extraordinary values now being achieved by San Francisco luxury properties in different neighborhoods of the city. These are just averages: Some homes are selling far beyond the values seen here, including a few over $2000 per square foot. 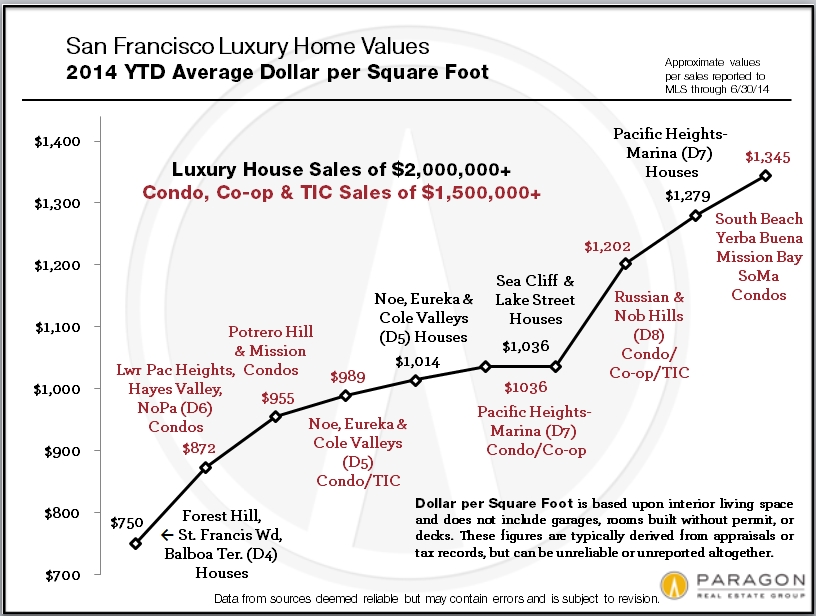 Luxury house sales in San Francisco are dominated by the swath of established, prestige, northern neighborhoods running from Sea Cliff and Lake Street through Pacific & Presidio Heights and Cow Hollow; by the greater Noe-Eureka-Cole Valleys district (which has seen explosive growth in this market segment since the mid-nineties); and, to a lesser extent, the smaller neighborhoods around St. Francis Wood and Forest Hill. 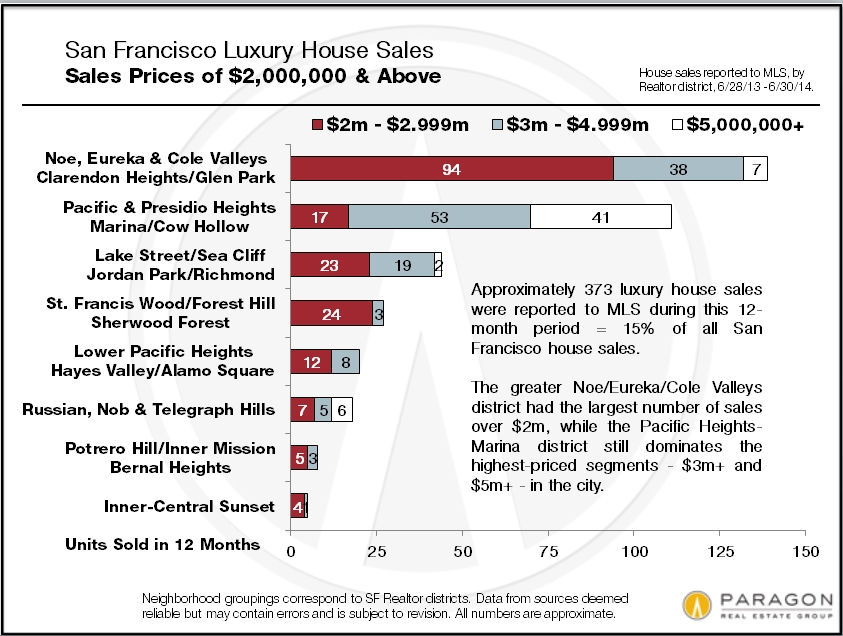 High-end condo sales have now overtaken luxury house sales in the city because of all the new-condo construction which occurred over the past 10-15 years – and this building boom, which lapsed in the 4 years after the 2008 market crash, is accelerating once again. (Very few new houses are built in SF anymore, though those few are typically quite expensive.) Besides the older Pacific Heights-Marina and Russian & Nob Hills districts, and the greater Noe-Eureka Valleys district, the newer neighborhoods of South Beach, Yerba Buena and Mission Bay have a rapidly growing footprint in luxury condo sales. And just very recently, high-priced, high-tech, condo buildings are being constructed in areas such as the Mission, Hayes Valley, and the Market Street and Van Ness corridors that were not previously considered luxury-home locations. 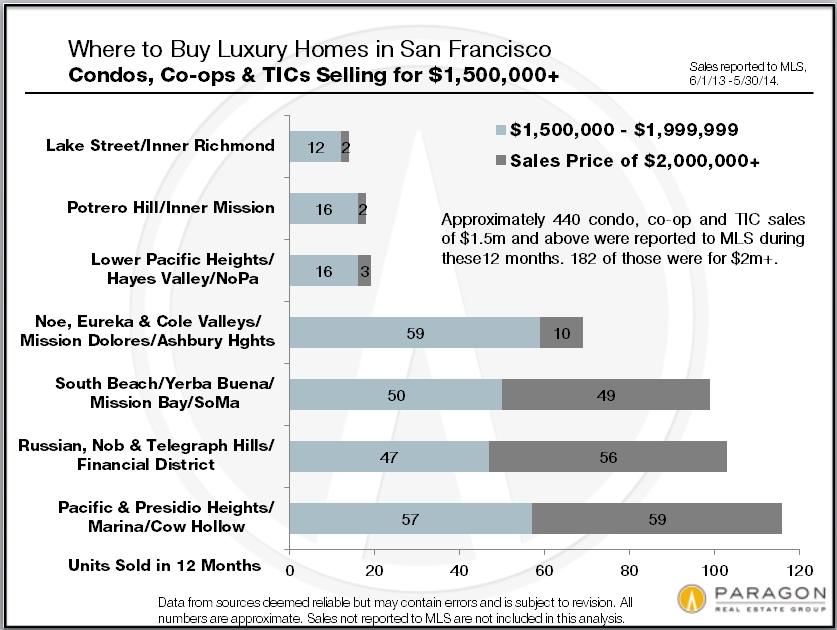 For the sake of simplicity, this chart looks at all SF home sales of $2,000,000 and above in the 2nd quarter of 2014. The 88% of these listings that sold without price reductions averaged a sales price 9% over asking price, with a very low average days-on-market of 26 days. These statistics are an indication of a very high-demand market. Still, not every home sold quickly: Listings that were price reduced averaged a sales price 12% below original price and spent 2.5 months longer on the market. And then a fair number of listings expired without selling, typically due to being perceived as overpriced: Even in a red hot market, one can overprice one’s home – and doing so will severely impact the market response. 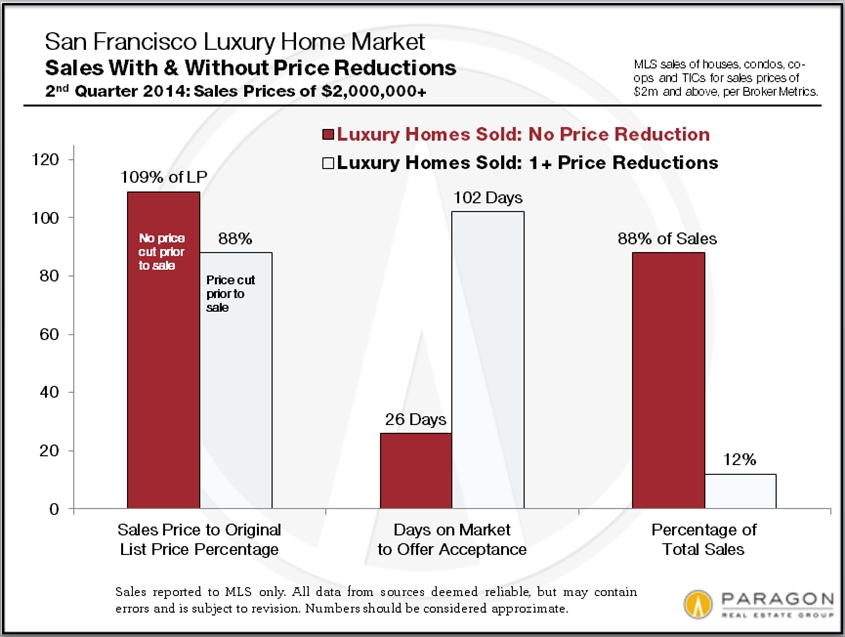 This table includes neighborhoods of varying home values, but still gives a fair representation of high-end home-price trends over the past 20 years. Average sales prices and dollar per square foot values have blown past their previous peaks of 2007-2008. 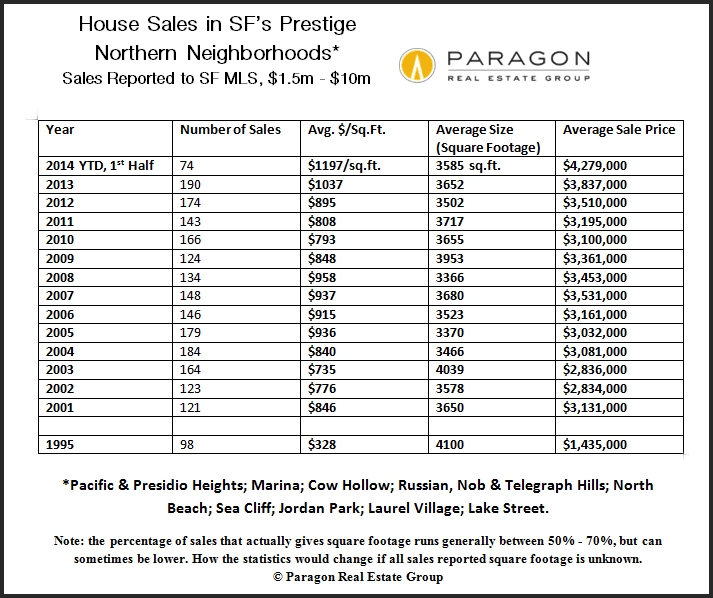 As mentioned before, other neighborhoods besides the “Prestige Northern Neighborhoods” now feature significant luxury home markets. More details on those districts can be found in the Neighborhood Values section of our website.

Here one can see the impact of newer, luxury high-rise buildings such as the 4 Seasons, the Millennium and the Infinity Towers, all located in the greater South Beach-Yerba Buena area. However, this list ranks only the largest condo buildings and since many of the condos in the older neighborhoods are in much smaller buildings, they won’t show up here even though they have extremely high values as well. Besides location, premium services and expensive amenities, probably the most common element of luxury condos in San Francisco is spectacular views, which can add hundreds of thousands or even millions of dollars to the sales price. (The city’s most expensive condo sale ever – a penthouse at the St. Regis – closed for $28m in 2011.) 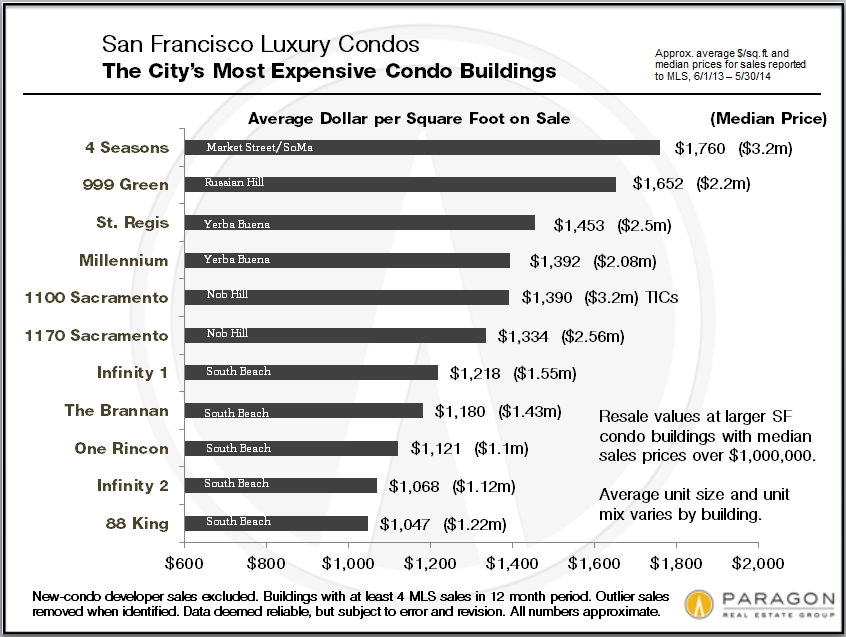 Paragon is one of the top 4 brokerages in San Francisco for luxury home sales
and has the highest Closed-to-List ratio of any of the city’s major luxury property firms. 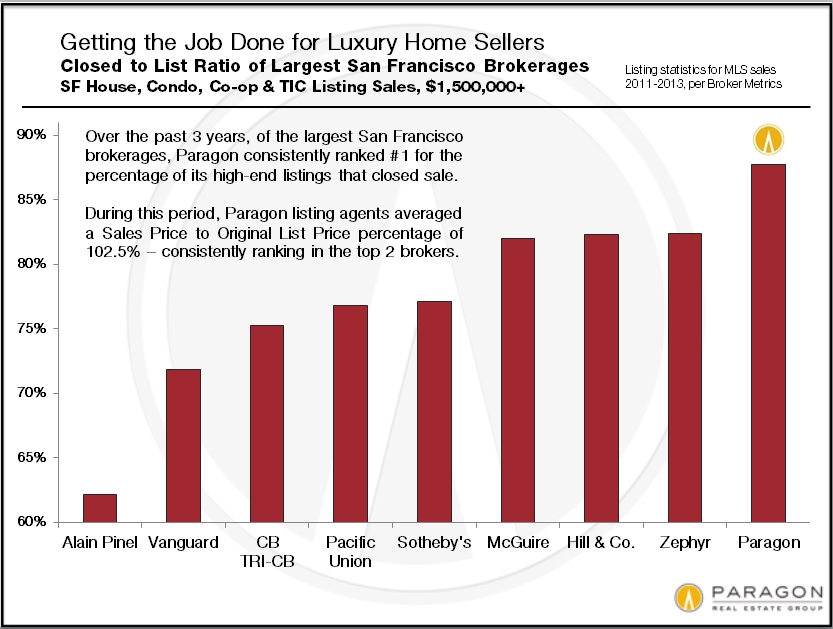 For your convenience, below is a map of San Francisco neighborhoods. 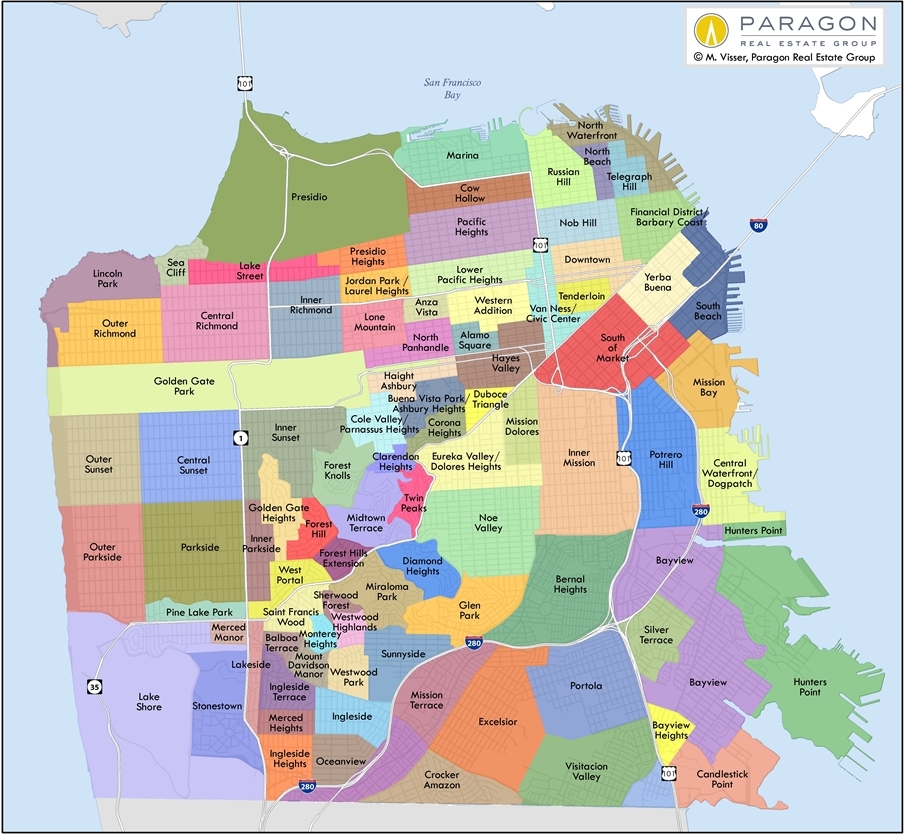