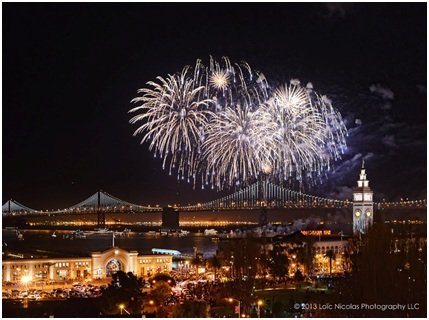 Happy New Year one and all!  While much of the rest of the country was just beginning to come out of its long recessionary swoon, our little piece of heaven enjoyed its second full year of a booming sellers’ market, fueled in no small part by what appears to be a decisive shift in venture capital to our local zip codes.  Those much-despised Goo-hoo buses are no accident.  Take a look at this instructive chart from an August 2013 piece in The Atlantic entitled “Why San Francisco May Be the New Silicon Valley”: 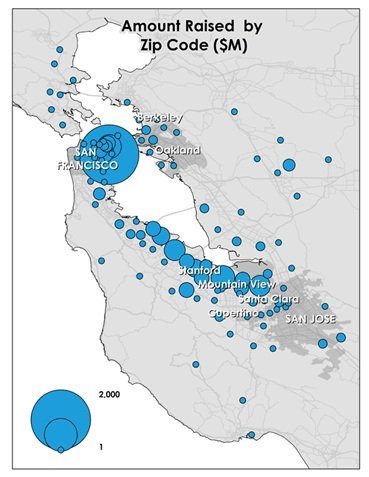 Add to those sparkling … er, bubbles… SF’s home-grown biotech and medical innovation companies, a resurgent financial sector, and several years of pent-up demand, and it’s no surprise that the Urban Land Institute placed San Francisco at the top of its list for places to invest for the second year in a row.  (You can download the full ULI report here.)

Let’s begin with some perspective.  What does the San Francisco real estate market really look like?  Our venerable market guru put together this chart from a number of sources. 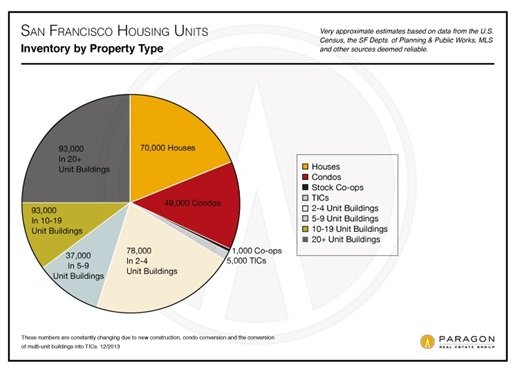 The numbers are approximate, but the chart shows that there are only about 125,000 housing units that are owned rather than rented.  That’s less than a third of SF’s total stock of around 425,000 units. Is it any wonder that renters are such a powerful force in San Francisco?

Now let’s look at what people bought last year.  The chart below shows that around 5,000 homes and condos traded hands, with condos leading the way by a few hundred units.  (These numbers don’t include “off-market” sales and sales of condos in new buildings, which sometimes are not reported through the MLS.Only 320 TICs changed hands. 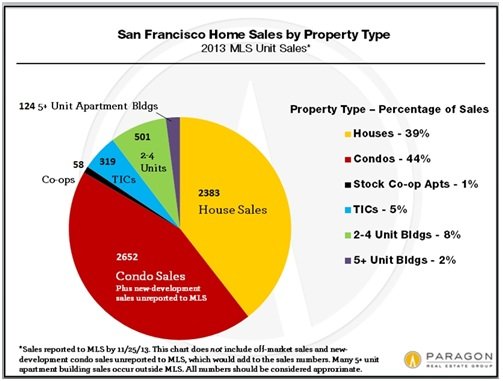 As you’d expect in San Francisco, the vast majority of homes sold were built pre-1950, if not pre-1940.  For condos it’s the reverse.  What’s telling in both cases, however, is how little “brand new” construction there is, especially for single-family homes.There were just 16 sales of “brand new” homes reported through the MLS last year. It’s no wonder, then, that these homes fetch a premium. 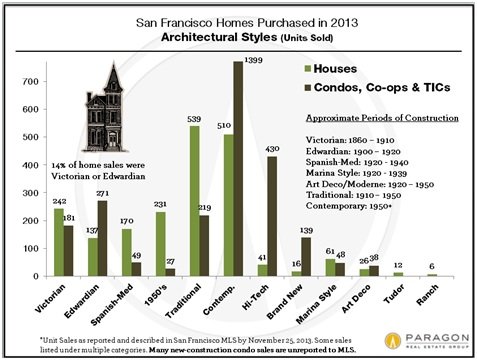 You can find much more detail about what people bought in 2013, from average house size by neighborhood to the views they saw out their window, here at my blog.

Where did the sales occur?  Around 20% of all home sales were in District 10, a large geographic area of economically modest neighborhoods that fared the worst during the housing crunch.  By contrast only around 5% of home sales occurred in the toney northern districts that include the Heights and the Hills.    As a result, median home values for the city as a whole are likely to be skewed to the lower end of the scale. 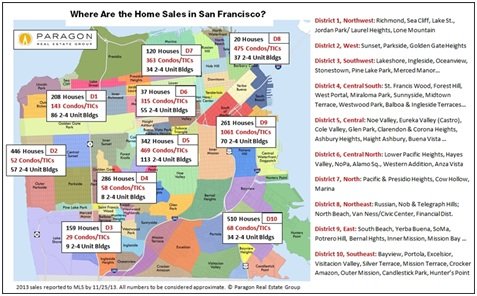 For the rest of the city, the map shows sales pretty much occurring where you’d expect them to:  lots of condos downtown and South of Market; lots of single family homes in areas like District 4 with its “Terrace” neighborhoods (Ingleside, Balboa) dating back to the 1920’s; a mix in District 5, which includes the always popular Noe and Eureka Valleys and the Castro.

City-wide, 2013 saw home and condo prices definitively exceed the pre-bust highs they’d reached in late 2007/2008.  There was a rapid run-up in the spring and summer, with a slow-down later in the year.  Some of the slowdown is undoubtedly seasonal; from what I’ve seen so far this year, there are a lot of people still chasing a very limited supply. 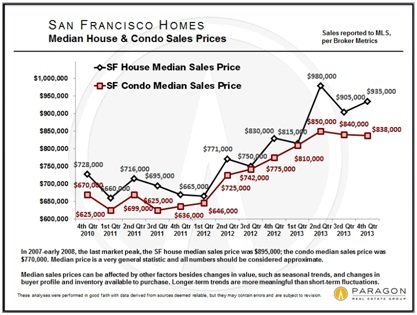 What these city-wide numbers don’t capture, however, is the huge rebound at the top end of the market.  If you define “luxury homes” as those selling for $2 million or more, that segment took off like a rocket at the start of 2012. I’d argue that this is where you see the effect of all those start-up upstarts that are now living and working in SF. 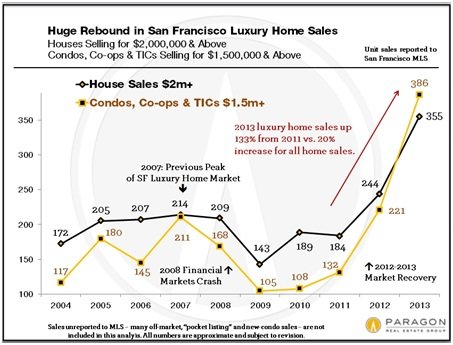 And I believe that the top end is pulling the rest of the market up with it.  As more and more people are being priced out of their first choice, other neighborhoods formerly perceived as less desirable are crashing through their previous price ceilings. One example:  Glen Park, a perennial second fiddle to Noe Valley, is suddenly studded with $2 million homes. Here’s a look at how a few neighborhoods have done. 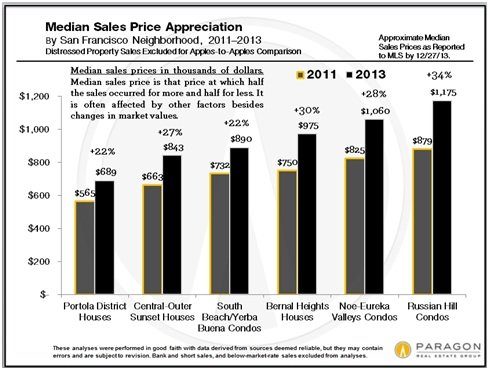 For a comprehensive analysis of other neighborhoods and segments, take a look at the full 2013 wrap-up posted on my blog, where you’ll find no less than 17 charts.

The economic news certainly seems more positive than it was a year ago.  Even if (I should say “when”) the Fed stops printing money and interest rates go up, people smarter than I am have said that it will likely have a minimal impact on the stock market.  The new high-rises that we see being built all over the city aren’t going to be online anytime soon and not everyone wants to live in a dowtown condo anyway.

The bottom line is that it’s hard to see any serious risk of a downturn in real estate values in the coming year.  What may happen, though, is that we will reach something of a plateau where prices stabilize for a while.  Have we reached that point yet?  Probably not. I’d say this sellers’ market  has a ways to run, albeit at a less frenzied pace.

As always, your comments and suggestions are much appreciated.  Please forward this email to anyone you think would enjoy reading it!