Skip to content
April 2014 Real Estate Market Report
The San Francisco real estate market grew increasingly frenzied as the first quarter of 2014 progressed, leading to another surge in home prices in virtually every neighborhood in the city. The high-demand/ extremely-low-inventory/ competitive-bidding situation is similar to what occurred first in spring 2012 and then, to an even higher degree, in spring 2013. After the market seemed to stabilize in the second half of last year, we didn’t expect to see it turn this fierce in early 2014, but right now it appears to be every bit as ferocious as last spring’s.

Of major metro areas, the new Gallup-Healthways survey ranked SF-Oakland second in the nation (behind San Jose-Santa Clara) on their index for “well-being.” Though already the second most densely populated city in the country (after NYC), San Francisco simply has many more people wanting to live here than there are homes available to rent or buy.

Sales over Asking Price
The heated competition for new listings coming on market has resulted in an astounding percentage of sales occurring above, and often far above, list price. 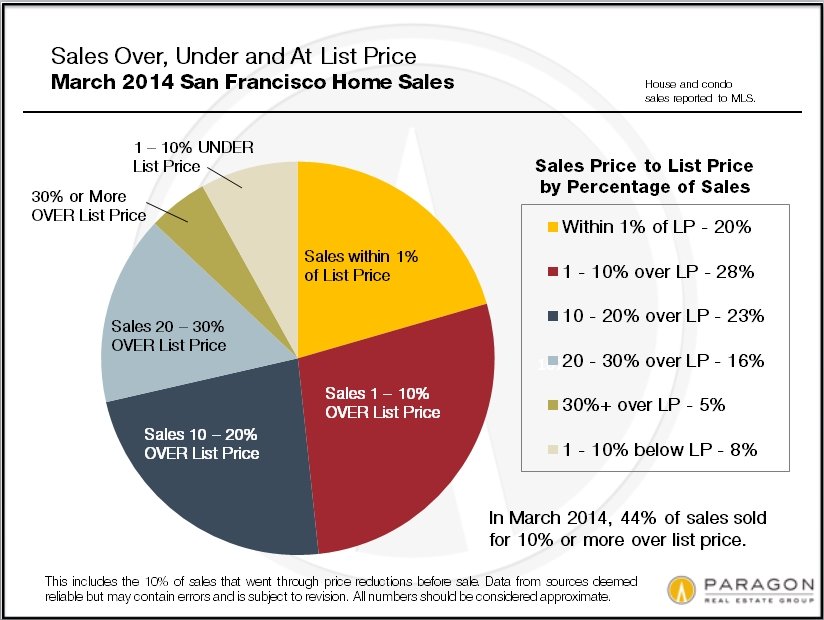 This chart below breaks down, by neighborhood, the average sales price to list price percentage for the 90% of homes selling without price reductions. Of the areas assessed, Bernal Heights came out on top with sales prices averaging an incredible 21% over list prices over the past 2 months. 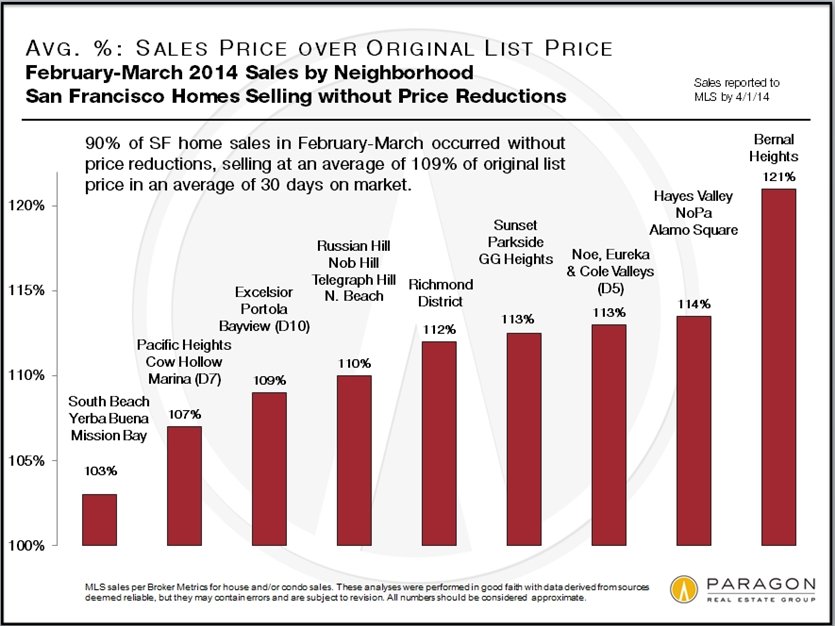 Median Sales Price Spikes
Typically, the first quarter of the year does not show a dramatic increase in median sales prices over the previous quarter – in fact, a decline in not unusual due to holiday market dynamics. But the first quarter of 2014 saw large spikes in median prices for both houses and, especially, condos in San Francisco.

This next chart is a look at quarterly median price appreciation over the past 3 years. 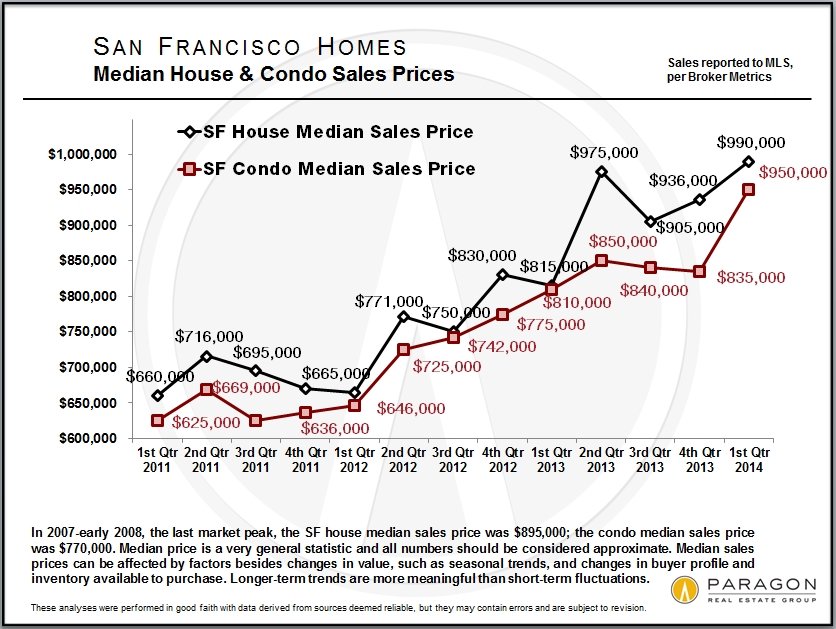 Longer-term trends: While virtually the whole country has been experiencing a large market rebound, San Francisco, because of our particular economic circumstances, is generally outperforming almost every other market area. The big exception is Silicon Valley, whose high home appreciation rate is being driven by many of the same employment and demographic causes as here in the city. 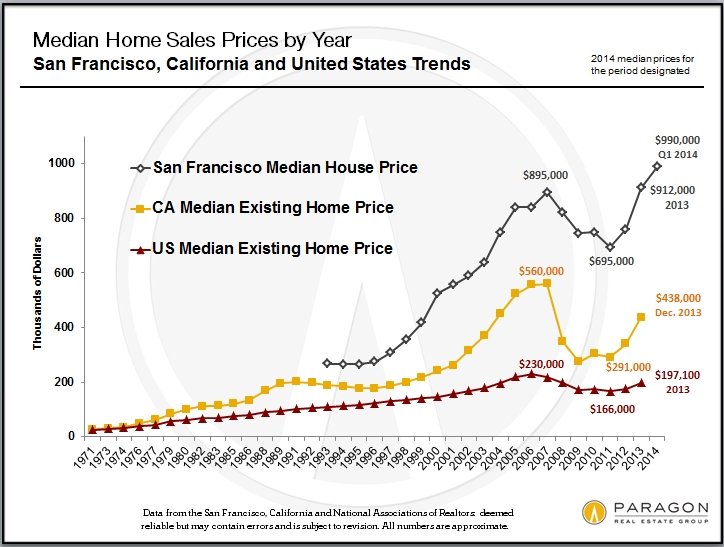 Far Too Little Inventory
When the market recovery began in earnest in early 2012, there were complaints of a shortage in inventory. In 2013, the market grew even more heated and supply declined further to what felt like desperately low levels. Now in 2014, amid no lessening of demand that we perceive, the supply of SF homes available to purchase has dropped again.
There are increasing numbers of new-construction housing units coming on market – and many more being planned and built – but so far they’re being snapped up, at very high prices, without noticeably altering the supply and demand dynamic. 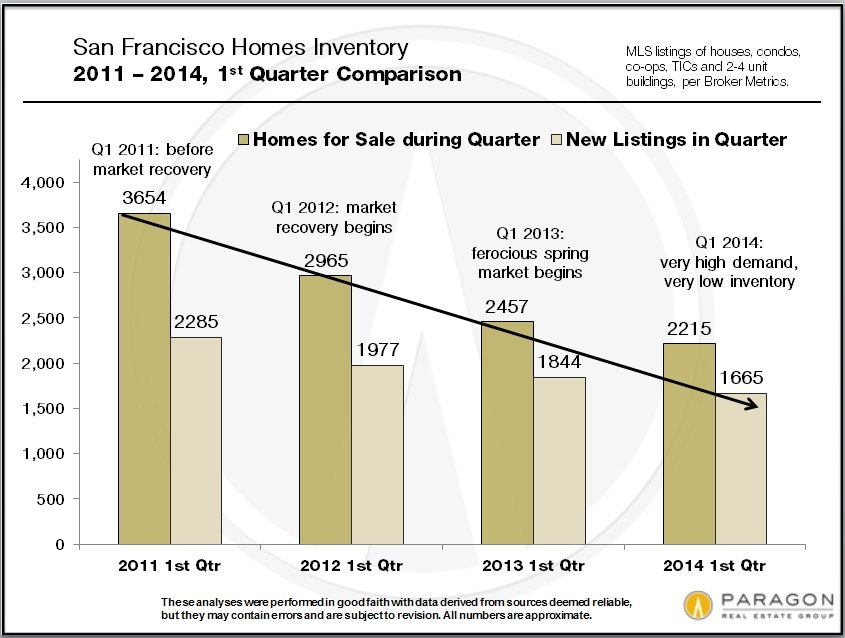 Listings Selling Faster than Ever 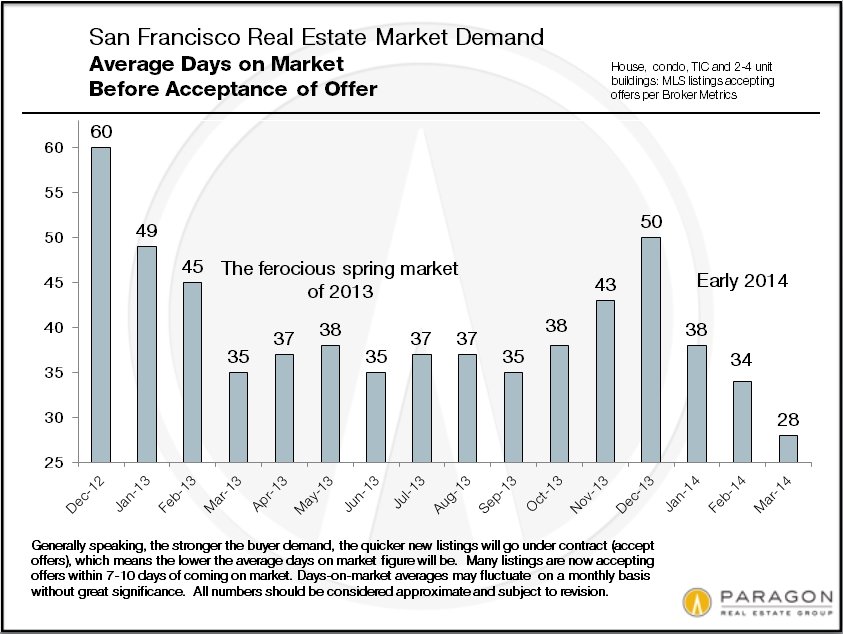 San Francisco Neighborhood Snapshots
We updated analyses for a number of city neighborhoods with enough sales for quarterly data to be meaningful. In every district we looked at, there were significant spikes in median sales prices and/or average dollar per square foot values in the quarter just ended.

Below are two samples, but our full collection of long-term neighborhood analyses can be found here (some updated through the first quarter, others through the end of 2013):
San Francisco Neighborhood Values 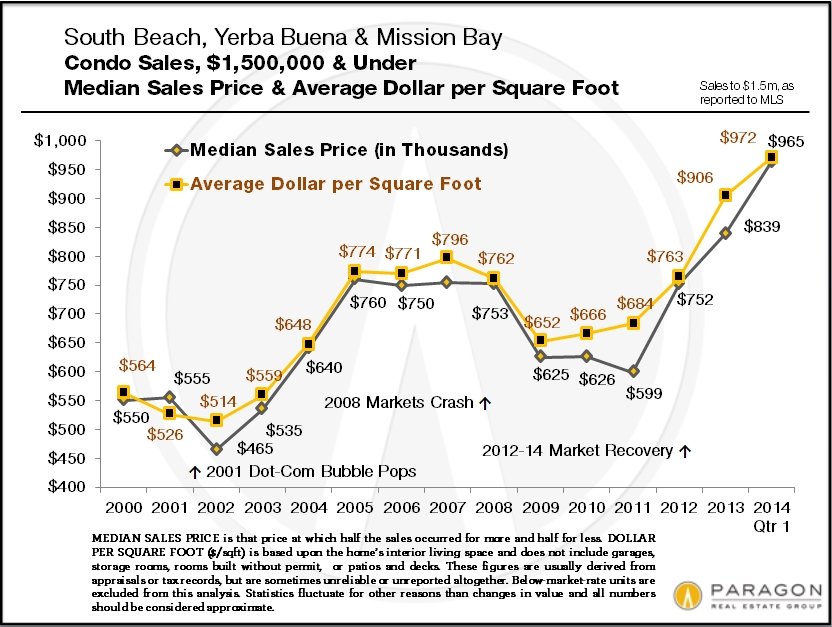 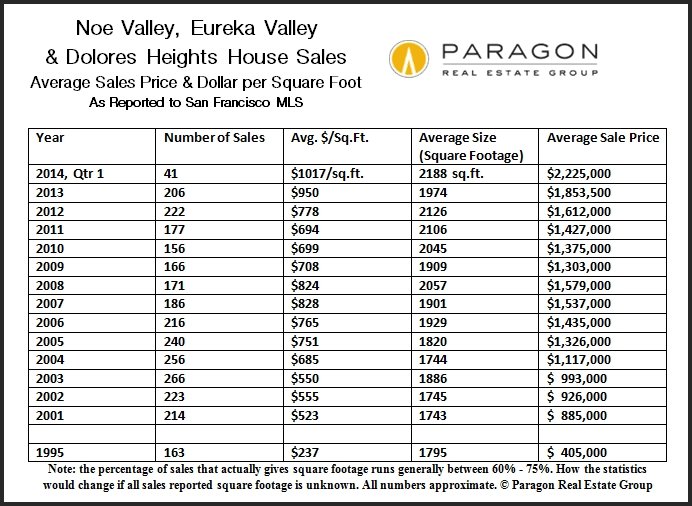 Affordability by Neighborhood
We broke the city down by neighborhood according to the number of house and condo sales in each price segment. Below are 3 analyses from our 11-chart report, which can be found in its entirety here:
Where Can I Afford to Buy in San Francisco 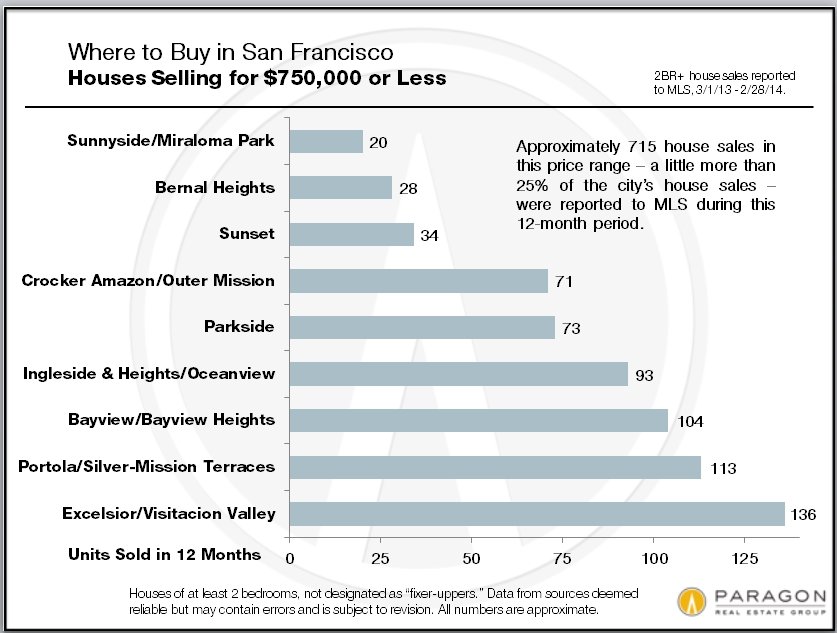 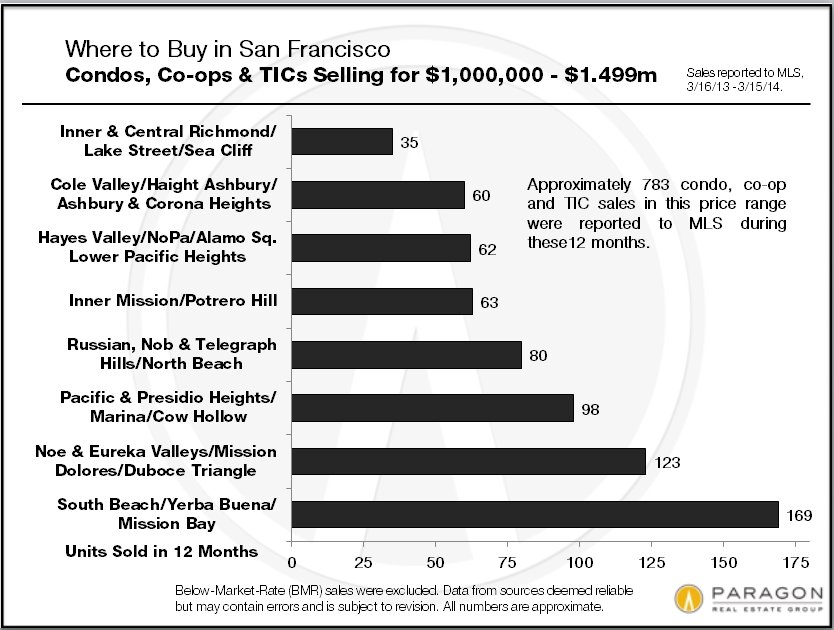 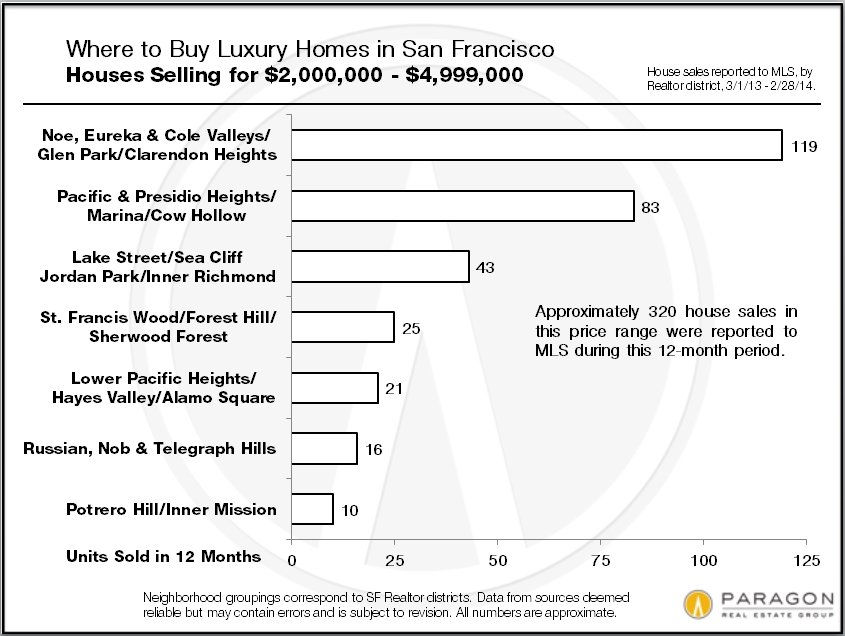 Paragon Featured in New Ranking Report
The new RealTrends 500 report ranking the sales statistics of the 500 largest residential brokerages in the country for 2013 sales was just published. After 10 years in business, Paragon came in #3 in average sales per agent and #4 in average sales price in the national ranking. 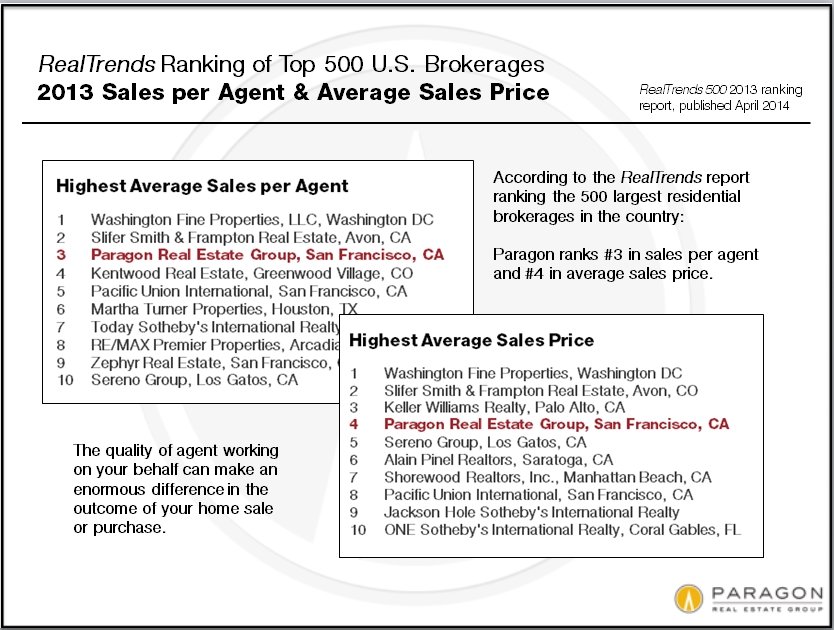