Where You Can Buy for the Money You Want to Spend

You want to buy a house in San Francisco for under a million dollars, or for over $2 million, or you have $1,800,000 to spend on a luxury condo with a spectacular view. If you’re buying a house in San Francisco, your price range effectively determines the possible neighborhoods to consider. That does not apply quite as much to condos and TICs, except for sales in the luxury segment: generally speaking, in neighborhoods with high numbers of condo and TIC sales, there are buying options at a wide range of price points, though, obviously, size and quality will vary. Also, all the new condo projects being built in many different areas of the city is changing the neighborhood pricing dynamic for condos.

For your convenience, a neighborhood map can be found at the bottom of this report.

The charts below are based upon sales reported to MLS in the 12 months between March 1, 2013 and February 28, 2014. We’ve broken out the neighborhoods with the most sales within given price points. There are exceptions to neighborhood norms scattered throughout the city and in an appreciating market these price ranges having been moving upward.

Buying a House for Under $1 million in San Francisco

Out of the approximately 2635 house sales in the past year, about 50% sold for under $1 million. The vast majority of these sales occur in a large swath of neighborhoods forming a giant L shape, down the west side of the city, from Outer Richmond to the border with Daly City, and then sweeping east across the southern side of San Francisco to Bayview and Hunter’s Point. Generally speaking, the western and central-ish neighborhoods cost more than the southern neighborhoods in this under $1m house market.

Houses in these neighborhoods began their recovery from the market downturn a step or two behind more expensive areas in San Francisco, but now the markets here are red hot and very competitive, and home prices are under very strong upward pressure. 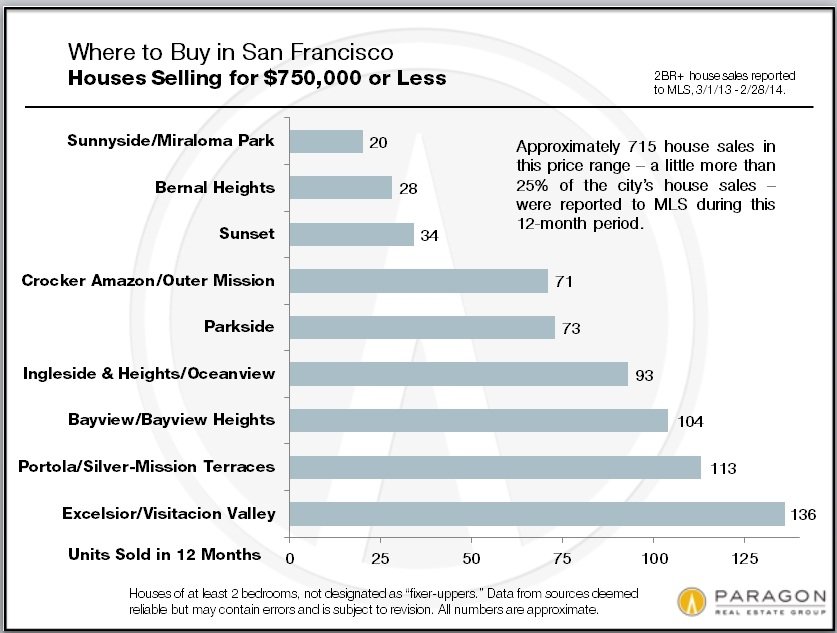 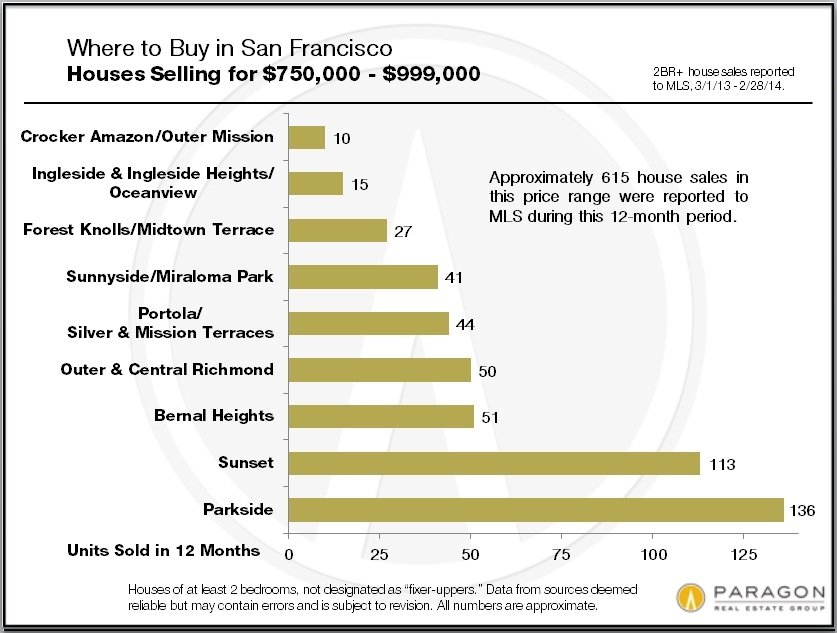 In this price point, one moves into a big circle of neighborhoods in the middle of the city plus the Richmond District in the northwest. Within this circle, one will typically get significantly more house for one’s money in the Sunset, Central and Outer Richmond, Miraloma Park or Bernal Heights than in Glen Park or Potrero Hill, or especially, Noe or Eureka Valley. 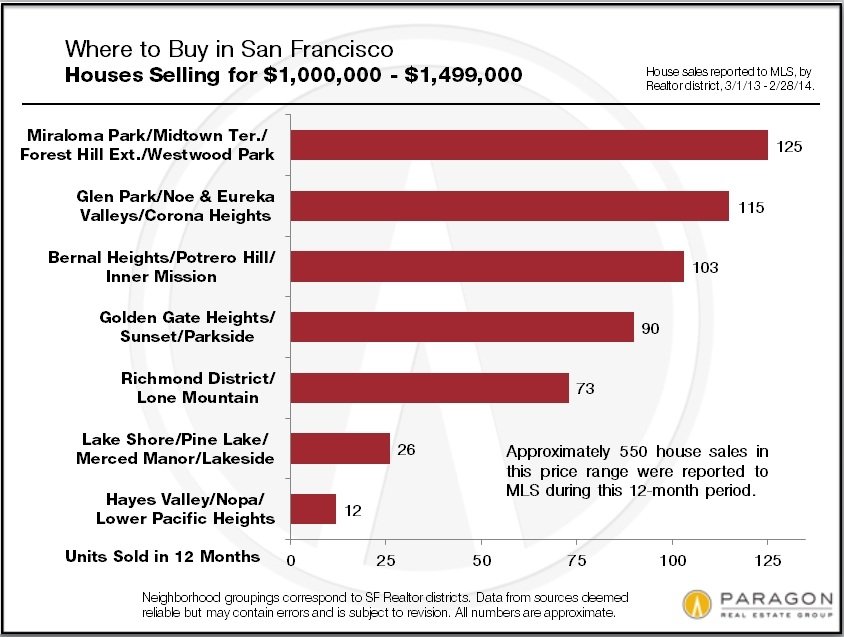 As the price range goes up, the number of sales begin to narrow. The neighborhoods in this house price range are similar to the previous range, but sales predominate in central Realtor District 5, which comprises the greater Noe- Eureka-Cole Valleys area. District 5 has been a white hot market for the last two years and competition for homes here is ferocious. 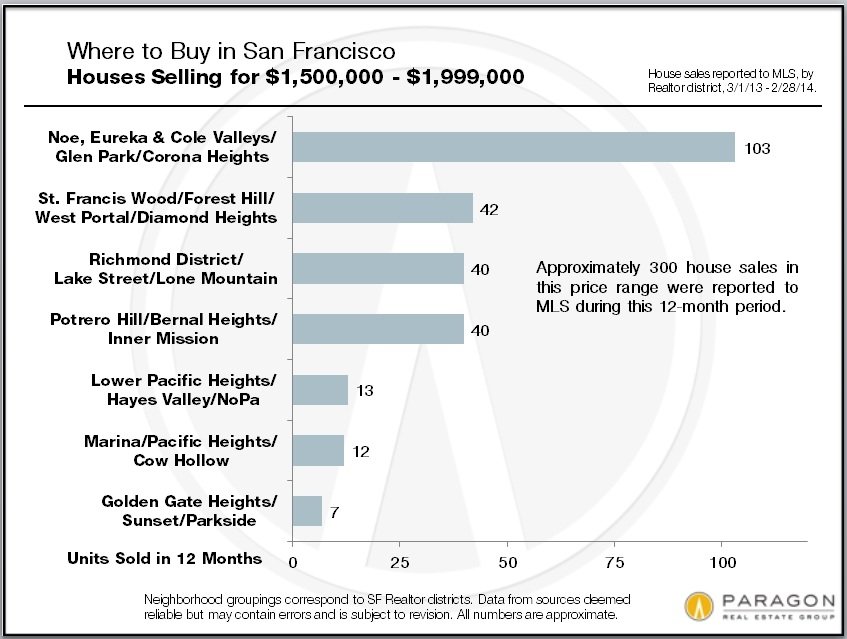 Rather arbitrarily, houses selling for $2 million and above, and condos, co-ops and TICs selling for $1.5 million and above are designated as luxury home sales in San Francisco: these homes now make up about 14% of total home sales (up from about 10-11% a few years ago). Once again, what you get in different neighborhoods for $2 million can vary widely – a large, immaculate house in one place, a fixer-upper in another.

Luxury home sales in San Francisco are dominated by the swath of established, prestige northern neighborhoods running from Sea Cliff through Pacific Heights and Russian Hill to Telegraph Hill, by the greater Noe-Eureka-Cole Valleys district, and, to a lesser extent, the smaller neighborhoods around St. Francis Wood. For luxury condos, the greater South Beach-Yerba Buena-Mission Bay area has a large and growing presence as big, expensive condo projects have sprouted there over the past 15 years.

As one can see, no area has more luxury condo, co-op and TIC sales overall than the Pacific Heights-Marina district, but the Russian Hill-Nob Hill-Financial District area has more sales of $2 million and above, and again the South Beach-Yerba Buena area is the fastest growing luxury condo market and will probably take first position in the not too distant future. The average dollar per square foot values for luxury condos in the major neighborhoods below run $918 in the Noe, Eureka and Cole Valleys district, $961 in the Pacific Heights-Marina district, $1147 in the Russian-Nob-Telegraph Hills district, and $1229 in the greater South Beach-Yerba Buena area (think newer construction, high floor units and spectacular views).

With the construction of new high-end, high-tech-amenity condo projects on Market Street and Van Ness, and in neighborhoods like the Inner Mission, Hayes Valley and Inner Richmond — often selling for more than $1000 per square foot — luxury condos are now spreading into new areas of the city. 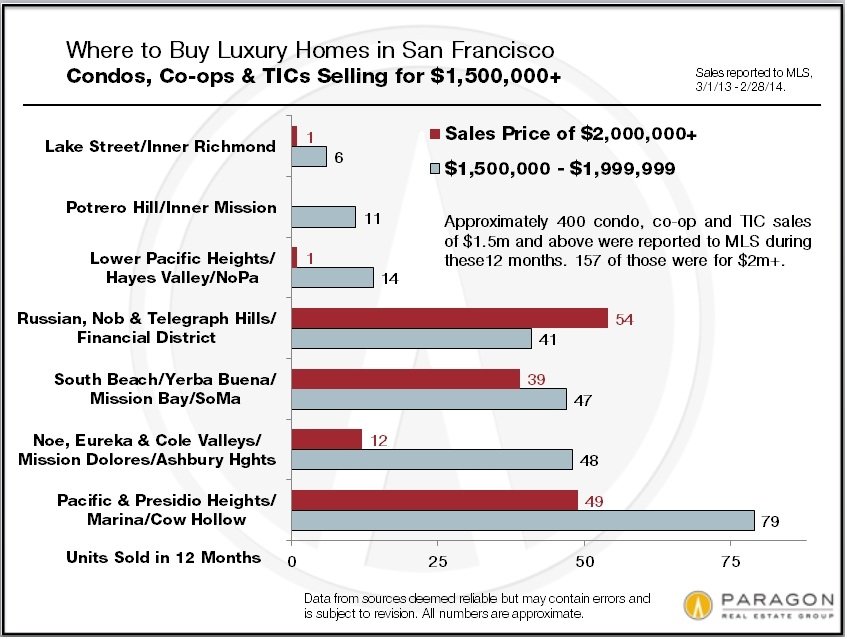 It wasn’t so long ago that houses selling in Realtor District 5, the greater Noe/Eureka/Cole Valleys area (which includes Clarendon, Corona and Ashbury Heights), for over $2 million were an exception. But that is certainly not the case any longer. If we looked closer at the sales in the $2 million to $5 million, we’d find the higher end of the range dominated by Realtor District 7, the Pacific Heights-Marina area, the most expensive house market in the city. Though District 5 does see sales in the $3.5 to $5+ million range, most of its luxury houses sell between $2 million and $3.5 million. There are several other significant areas for these high-end houses, such as Lake Street/Sea Cliff, St. Francis Wood/Forest Hill and Lower Pacific Heights.

Most luxury houses in the city were built in the period between 1905 and 1950, reflecting the era of construction dominating these neighborhoods of San Francisco — and a gracious, elegant era it was. However, there are a small number of big, new houses built each year, as well as some beautiful fifties houses scattered here and there, and, of course, many of the older houses have been extensively renovated over the years. 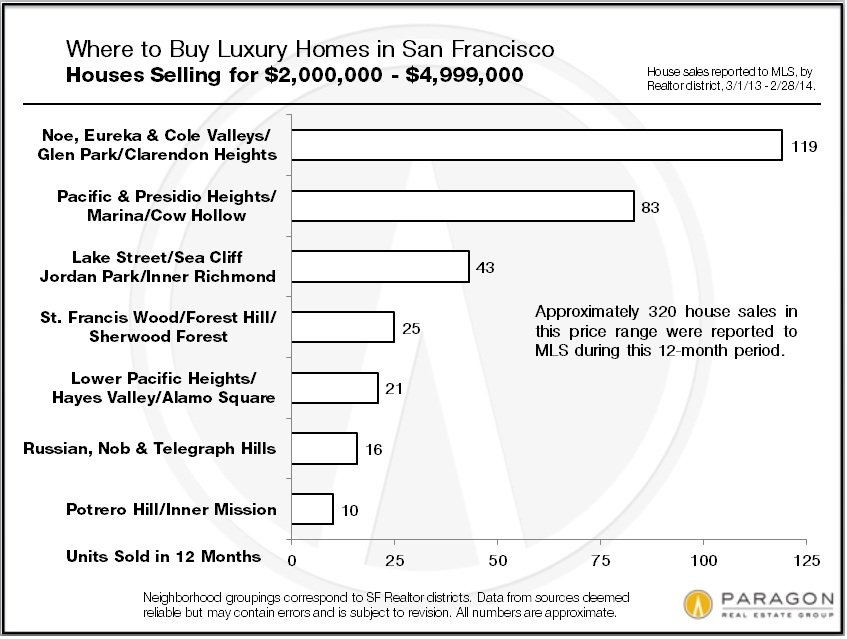 And, as illustrated below, at the very top of the luxury house market, the district of Pacific & Presidio Heights, Cow Hollow and Marina completely dominates sales. Here mansions can sell for up to $20 million or $30 million. Houses in Russian Hill are also exceedingly expensive, but there are very few houses in that area: Russian & Nob Hills are dominated by high-end condos and co-ops. Two additional house sales (both listed by Paragon) in the $5 million to $7 million range closed in Noe Valley in the first half of March 2014 (after the time period of this analysis) — another indication of what’s happening there, often driven by young, high-tech wealth. It should be noted that a fair percentage of these ultra high-end home sales occur privately, outside of MLS, and are not reflected in this chart. 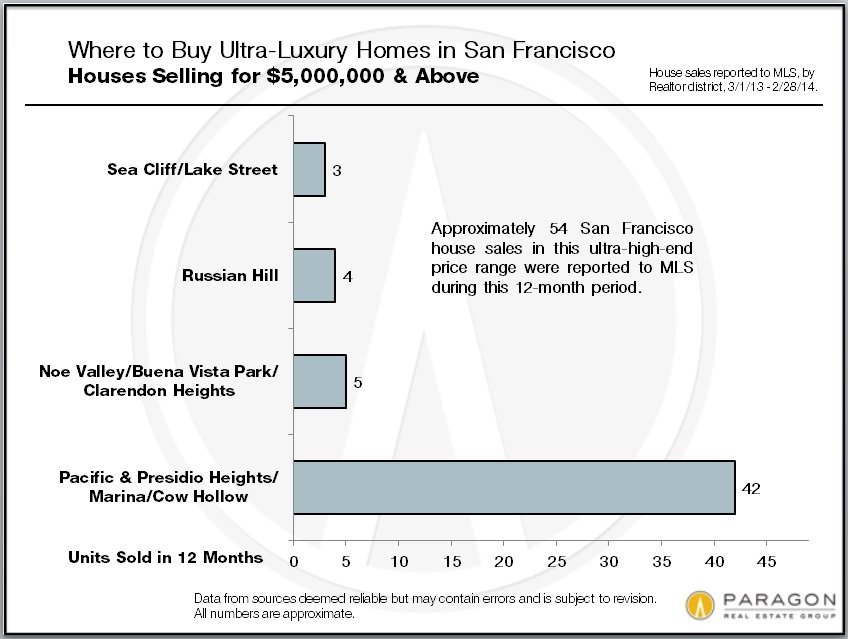 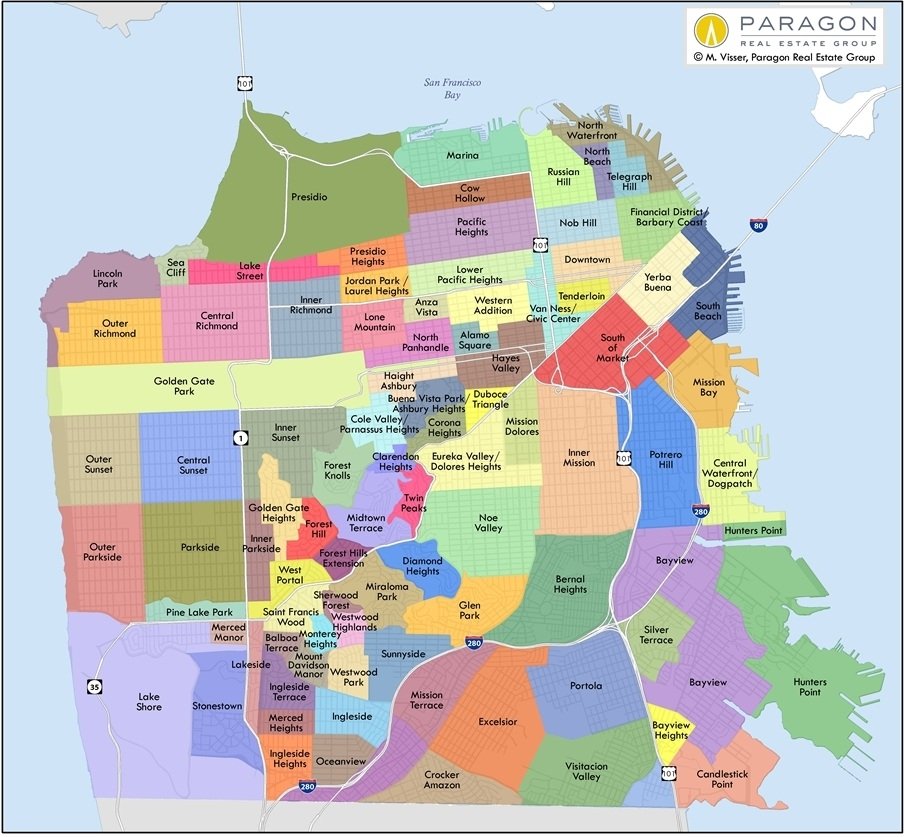