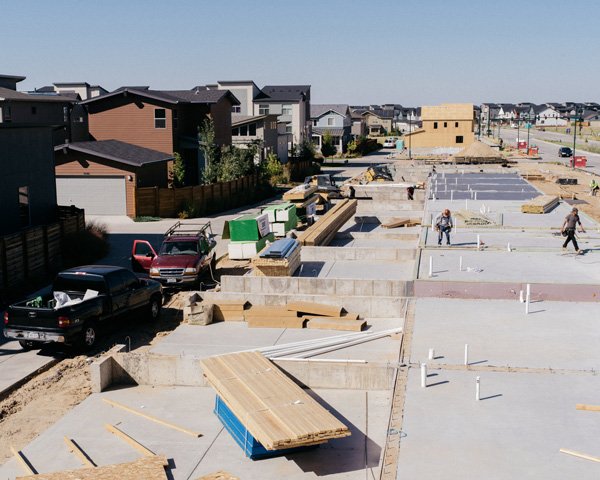 This Sunday’s front page NY Times article suggests a national slowdown as wage increases fail to keep up with home price increases. Indeed, it “feels” as though there is some slowing in the market, especially at the higher end – and we do have the data to indicate that there’s been a lot more new inventory coming to the market in the months of August and September than in the previous two years. We do not yet have hard data on whether this and other factors are creating downward pressure on sales prices. Stay tuned!

DENVER — By nearly any measure, this city is booming. The unemployment rate is below 3 percent. There is so much construction that a local newspaper started a “crane watch” feature. Seemingly every week brings headlines about companies bringing high-paying jobs to the area.

Yet, Denver’s once-soaring housing market has run into turbulence. Sales and construction activity have slowed in recent months. Houses that would once have drawn a frenzy of offers are sitting on the market for days or weeks. Selling prices are rising more slowly, and asking prices are being slashed to attract buyers.

Similar slowdowns have hit New York, Seattle and even San Francisco, cities that until recently ranked among the nation’s hottest housing markets. The specifics vary, but economists, real estate agents and home builders say the core issue is the same: Home buyers are reaching a breaking point after years of breakneck price increases that far exceeded income gains.

“The local economy is still fantastic, all the fundamentals are there, but obviously wages are not keeping pace,” said Steve Danyliw, a Denver realtor. “As the market continues to move up, buyers are being pushed out.”

Rachel Sandoval is one of them. An elementary schoolteacher in the Denver Public Schools, Ms. Sandoval earns about $50,000 a year, enough to afford a condominium or a modest house in most markets. But not in Denver, where the median sales price for all homes was $410,000 in August, and where even condos routinely top $300,000 — a price Ms. Sandoval calls “not even close to feasible.” She said she was scoping out jobs in Texas, where houses are cheaper and pay is higher, and considering leaving teaching in search of a higher salary.

For now, Ms. Sandoval, 41, is sharing a one-bathroom rental house with two roommates, a nurse and an adjunct professor. The three stick to a strict schedule to make sure they can all get to work on time.

“We are professionals, we have degrees,” Ms. Sandoval said. “This was not the plan.”

Nationwide, sales of previously owned homes fell 1.5 percent in August from a year earlier, according to the National Association of Realtors. Residential building permits were down 5.5 percent over the past year, according to the Department of Commerce. Many economists say the housing market may have turned into a drag on the gross domestic product.

The recent slowdown, however, is unlikely to give would-be buyers like Ms. Sandoval much relief. Prices in Denver are still up 8 percent over the past year, according to the S&P Case-Shiller index. That’s cool compared to the double-digit gains of a couple years ago, but well ahead of the 6 percent increase in average hourly earnings over the same period. Rising interest rates have also made buying homes more expensive.

Few analysts expect an outright decline in home prices anytime soon. That’s because, unlike the speculative bubble of the mid-2000s, the recent run-up in prices has been driven primarily by economic fundamentals: People are moving to Denver faster than developers can build places to live. The Denver region has added more than 300,000 residents since 2010, making it one of the country’s fastest-growing areas.

Introductory economics textbooks suggest that high prices should attract more supply or suppress demand — or both. Inventories of unsold homes have risen in Denver and other markets in recent months, and the real estate site Zillow found that price cuts have become more common.

Over all, however, the housing market is not behaving as the textbooks say it should. Inventories remain low despite the recent increases, and new construction is slowing, not picking up.

Part of the problem, local real estate agents say, is that the furious pace of price growth has essentially gummed up the market, making homeowners reluctant to sell for fear of being unable to find a new home. 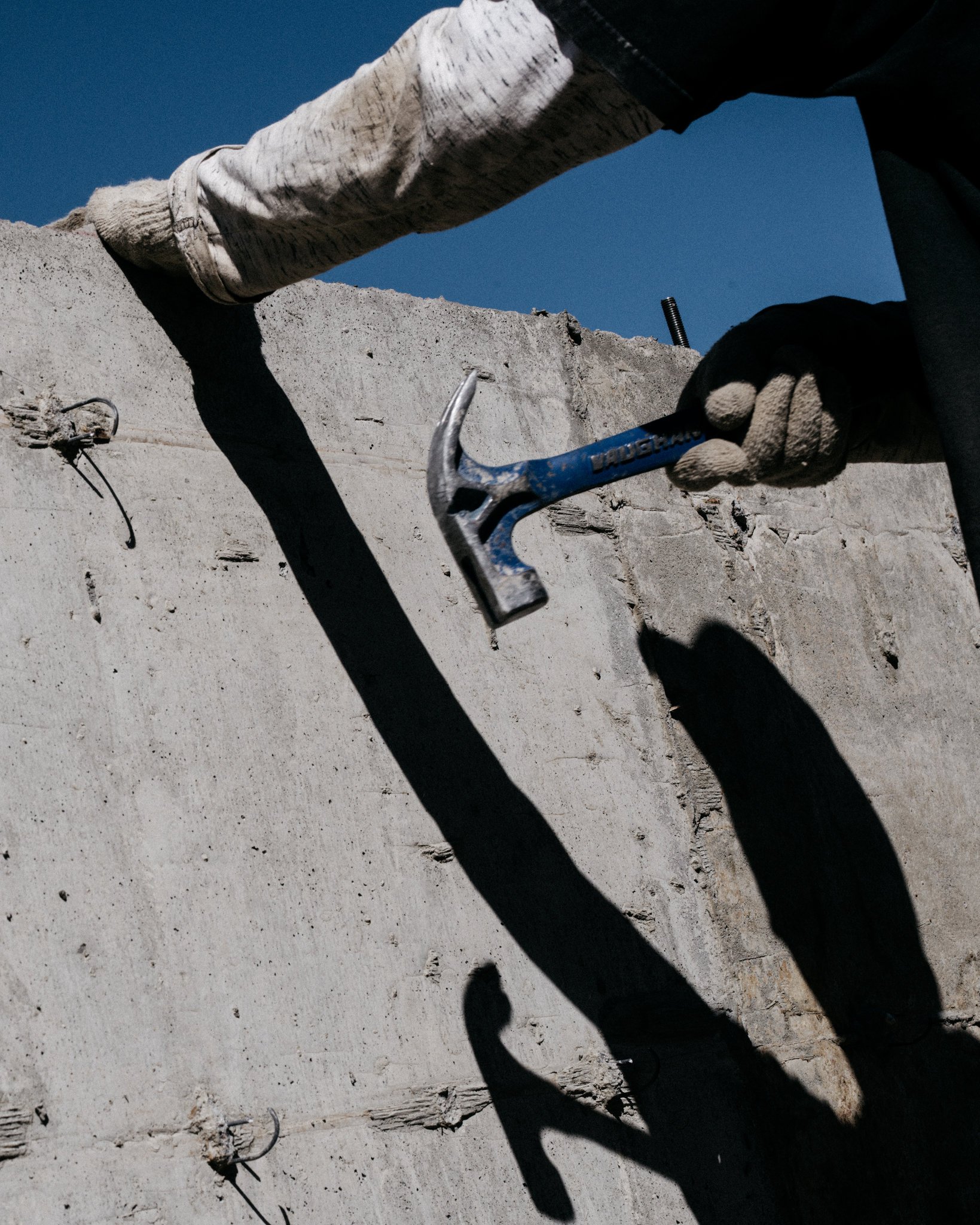 The median sales price for all homes in the Denver area was $410,000 in August, and condos routinely top $300,000. Credit Benjamin Rasmussen for The New York Times 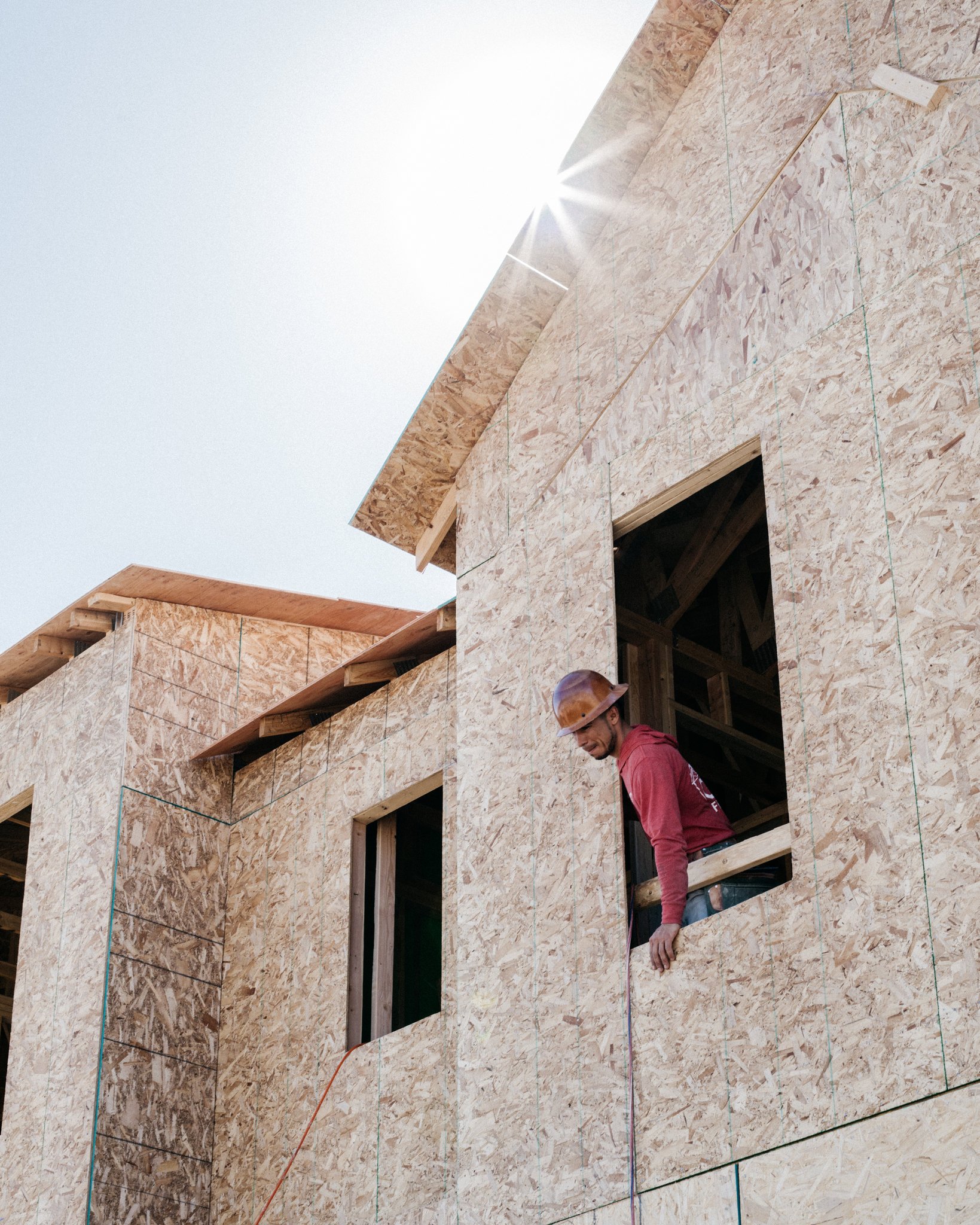 The median sales price for all homes in the Denver area was $410,000 in August, and condos routinely top $300,000. Credit Benjamin Rasmussen for The New York Times

Brant and Annie Wiedel spent more than a year trying to get a foothold in Denver’s housing market — and they are reluctant to give it up. The couple estimate that they looked at 160 houses before finally closing on a three-bedroom ranch house in Lakewood, a suburb, three years ago.

With two children and a third due in January, the Wiedels would like to trade up. With the rise in home prices some renovations, the house they bought for $350,000 could be worth more than $500,000.

But the family borrowed at about 3.5 percent three years ago. Today, they would pay closer to 5 percent. “Even if we just saw houses at the same price, we’d have to pay more” every month, he said. 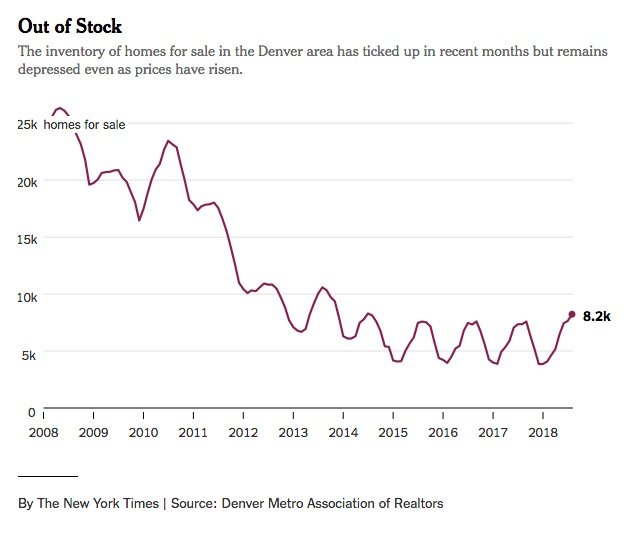 Ultimately, the key to breaking the logjam is to build more homes. Downtown Denver is crawling with cranes, many of them erecting amenity-filled apartment complexes aimed at young professionals. A drive in almost any direction from downtown reveals freshly built subdivisions with names like Tallgrass, The Enclave and Green Gables Reserve.

Most of those new homes, however, will list for more than $400,000. And hardly any builders are selling properties for under $300,000 without government subsidies. Even many home builders worry they are pricing themselves out of the market.

“I see the biggest threat to our business as the affordability challenge, that we are building houses that people can’t afford,” said Gene Myers, chief executive of Thrive Home Builders.

The problem, Mr. Myers and other local builders say, is cost. The price of land, building permits and other fees can run close to $150,000 for a single-family lot — before construction.

Some of the challenges are specific to Colorado. Quirks in state law, for example, make it easy for condominium buyers to collectively sue builders over construction defects, making developers reluctant to build condos.

But other issues are common to many cities. Building materials have become more expensive, in part because of tariffs on lumber and other products that President Trump imposed this year. Labor costs are rising, too, especially for skilled trade workers. Restrictive zoning makes it hard to build denser developments that make cheaper homes profitable for builders. 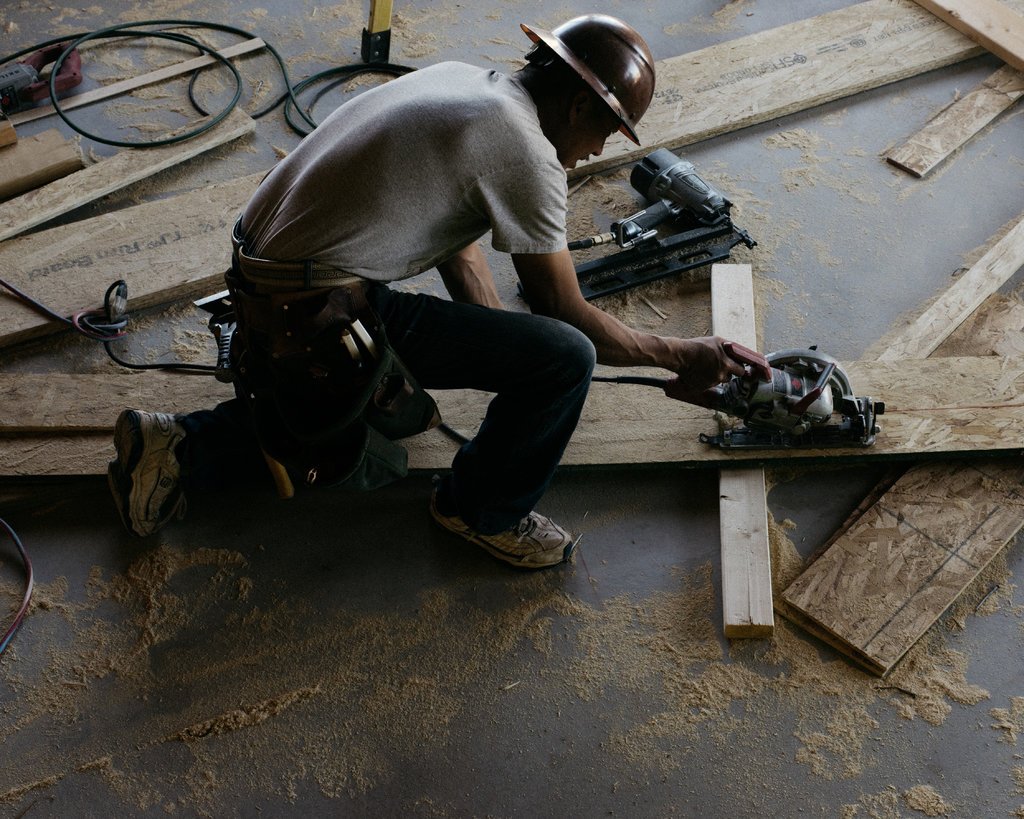 Building materials have become more expensive, in part because of tariffs on lumber and other products that President Trump imposed this year. Labor costs are rising, too, especially for skilled trade workers. Credit Benjamin Rasmussen for The New York Times

“They’re producing what they can produce,” said Sam Khater, chief economist for Freddie Mac, the government housing-finance company. “The problem is, it’s uneconomic for them to produce affordable.”

This big-city conundrum is spreading. People priced out of San Francisco moved to Seattle and Portland, driving up prices and displacing people who moved to Denver and Austin. Next on the list: Boise, Nashville and other cities offering some of the same attractions at lower prices.

Sure enough, the online real estate site Redfin this spring found that Denver had joined Seattle and San Francisco as cities with a “net outflow” of users — that is, there were more people on the site looking to leave Denver than to move there.

“City after city is going to face this,” said Glenn Kelman, Redfin’s chief executive. “At some point, the buyers step back and say, ‘Enough is enough.’”

More people are moving to Denver than leaving it, but migration has tapered off in recent years. J. J. Ament, chief executive of Metro Denver Economic Development Corporation, said he had seen no sign that rising home prices were making the region less attractive. Last month, VF Corporation, an apparel maker that owns brands like The North Face and Vans, announced it would move its headquarters to Denver from North Carolina, partly because of the area’s reputation for outdoor activities. The state also offered $27 million in incentives.

“I wouldn’t use the word ‘crisis,’” Mr. Ament said. “The work force is still willing to move here.”

Plenty of people in Denver do use the word “crisis,” however. A January report from Shift Research Lab, a local research group, concluded that years of under-building have left the region with a shortfall of tens of thousands of housing units.

That shortfall could threaten Denver’s growth, said Phyllis Resnick, a Colorado State University economist and one of the report’s authors. The skilled workers moving to the area, who have been so important to attracting companies and jobs, want to be able to eat out at restaurants, drop off their dry cleaning and send their children to school, all of which require lower and middle income workers. If they cannot afford to live in the area, Ms. Resnick said, Denver will not retain its allure — and the economy will not keep growing. 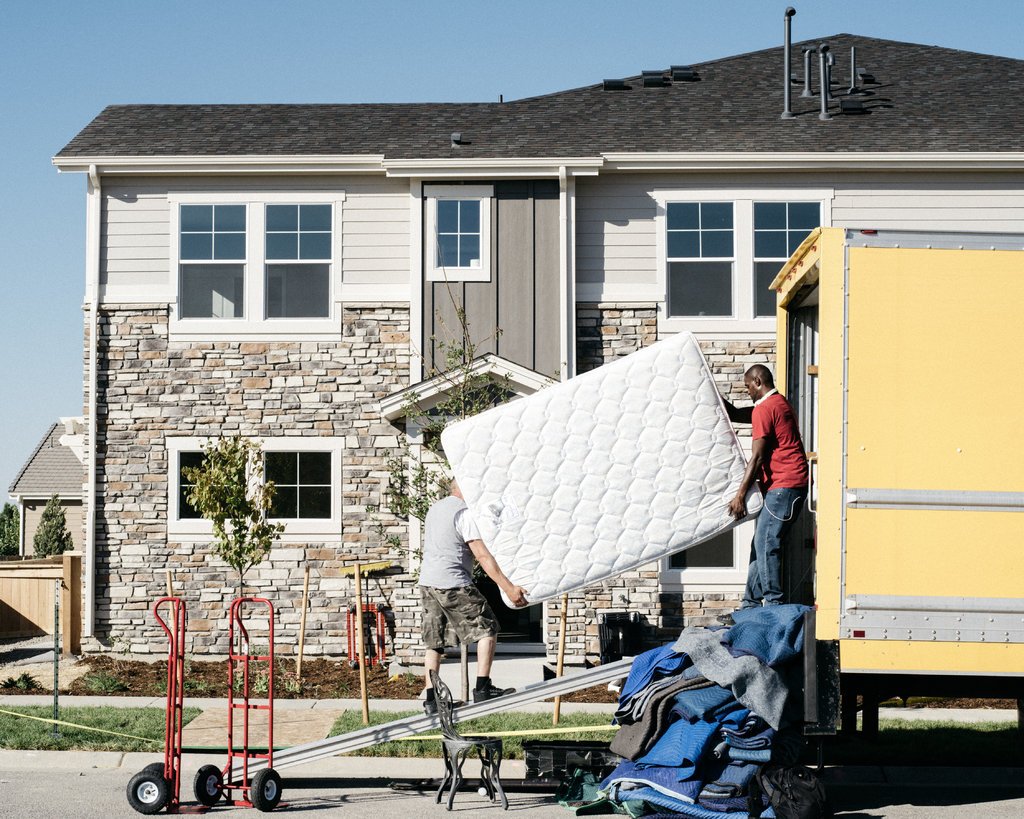 Angela Kirkland-Vandecar recently moved into a condo in the Villas at Wheatlands in Aurora, Colo., east of Denver. Each lot in the development has three attached homes. Credit Benjamin Rasmussen for The New York Times

“My concern is, at some point it sort of breaks because we can’t house the folks that we need to fill out all the economic activity in the region,” she said. “I’m not convinced that in the near term it will correct itself just through market forces, unless that’s through people moving out.”

Local governments and charities are trying to address the problem. The Denver City Council last month voted to double, to $30 million per year, the city’s affordable housing fund, which is used to build and preserve homes for low-income residents. Late last year, nonprofit groups announced they had raised $24 million to start the Elevation Community Land Trust, which will buy land to create permanently affordable housing. Another new program aims to help public schoolteachers come up with down payments.

To have a big impact, economists say Denver and other cities have to build more homes affordable to middle-class families. That will require persuading communities accustomed to single-family homes to accept condos and townhomes.

“The only way to solve the riddle is through density,” said Dave Lemnah, co-owner of Lokal Homes, a Denver builder.

That’s why he is building projects like the Villas at Wheatlands, a 94-unit development in Aurora, east of Denver. Each lot has three attached units arranged like a jigsaw puzzle. Lokal sells the homes for less than $400,000; some go for close to $300,000.

One buyer, Angela Kirkland-Vandecar, an aesthetician and a single mother, has spent two years searching for a home she could afford on her roughly $50,000 income. 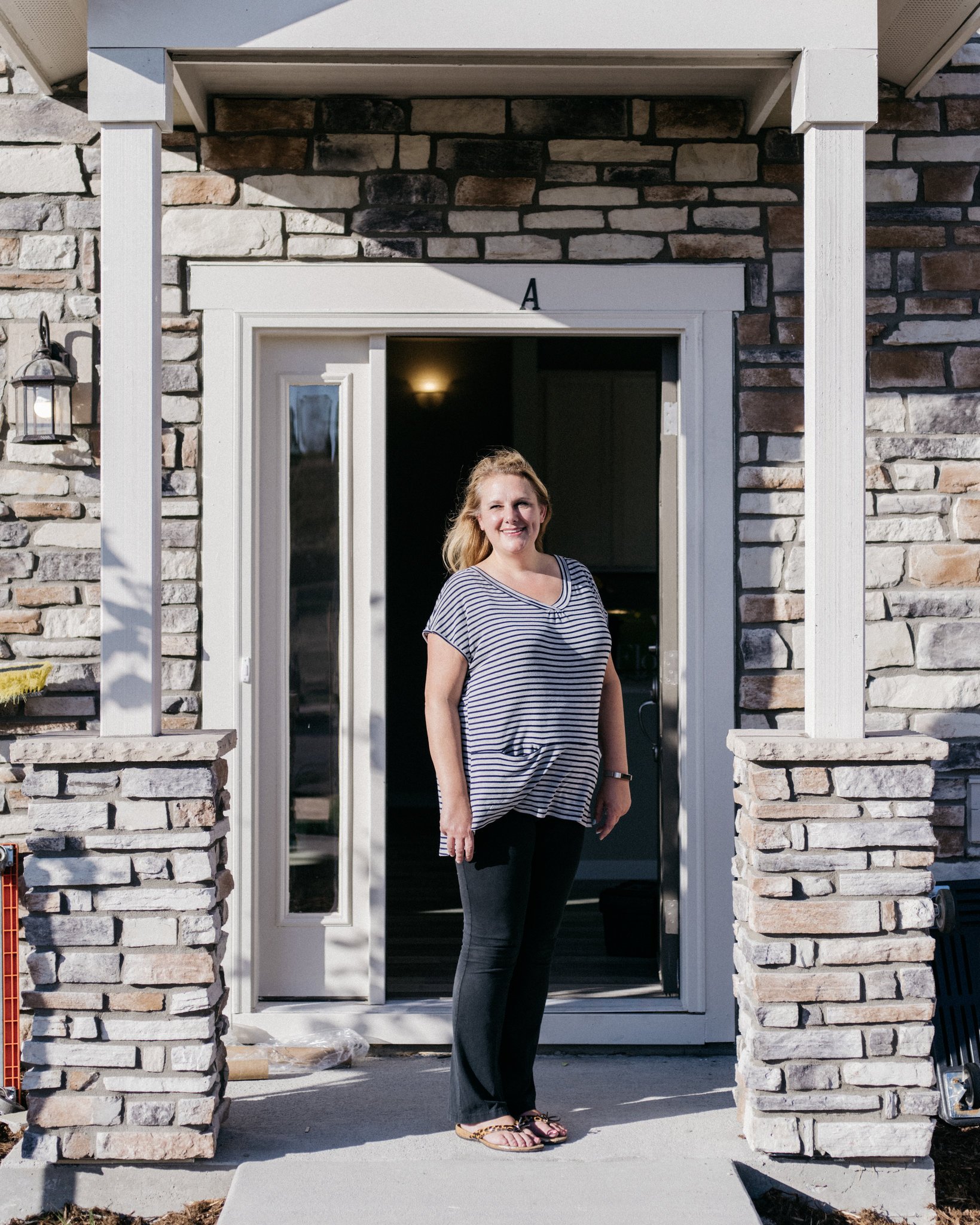 Ms. Kirkland-Vandecar said she spent two years looking for a home before finding one she liked and could afford. Credit Benjamin Rasmussen for The New York Times

When Ms. Kirkland-Vandecar began her search, she did not want to move to Aurora or to a condo.

“I’ve now done everything that in the beginning I said I was not going to do,” she said.

But Ms. Kirkland-Vandecar feels good about her decision. Her monthly mortgage payment will be less than her $1,900 monthly rent, and she is happy not to have a lawn to mow. Her daughters, 11 and 13, will have their own rooms, and she will no longer have to store food in the laundry room, as she did in the cramped apartment she had been renting.

Walking through her nearly ready house recently, looking for defects, Ms. Kirkland-Vandecar opened a door in the kitchen and paused. A Lokal Homes worker asked if she had found a problem. She shook her head.