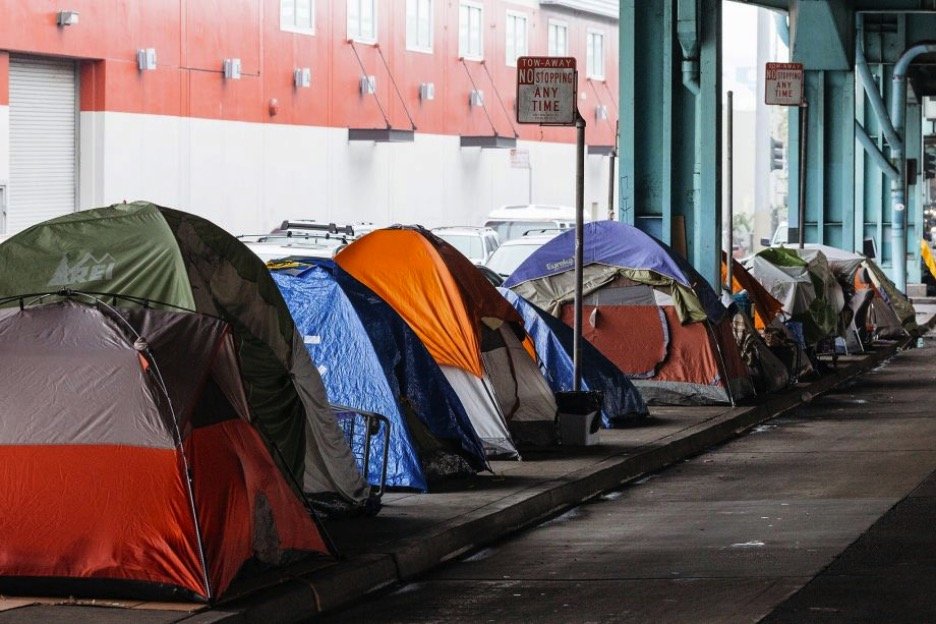 The weather is turning chilly.  While most of us were enjoying a surfeit of food with friends and family indoors last week, the Bay Area’s homeless were struggling to stay warm.  I’ve lived in this city for over 30 years, and the only other time I can think of when homelessness was this visible occurred during the mid-1990’s, before the dot com bust. Then, like now, the city was doing well.

It’s easy to avert our gaze from the tent encampments that gather under the freeways and along certain streets. Meanwhile, home prices are at record levels. Surely we can do better.

SPUR is a leading urban planning organization focused on Bay Area development and government. In its September issue of The Urbanist (available here),  SPUR breaks down the demographics of homelessness by county and provides background on its causes. It also offers some policy directions, if not solutions.  Here are some takeaways from the article. 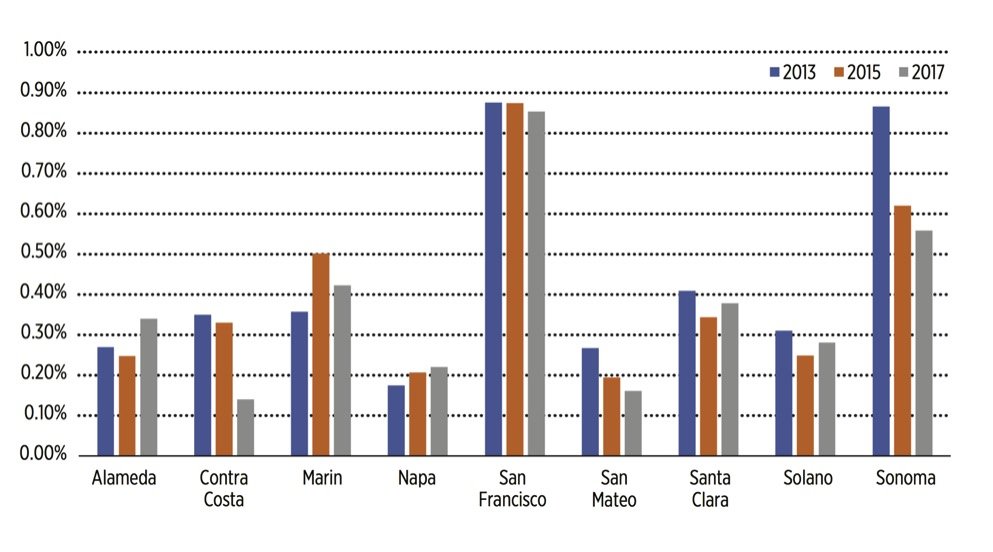 It should not come as a surprise that the most urban of counties, San Francisco, has the highest homelessness rate at about 0.85%.  With SF’s population currently estimated at around 870,000, that puts the number of homeless at about 7,400 individuals.  I found it surprising, however, that the homeless rate in San Francisco has not gotten worse in recent years — if anything it’s improved slightly.

Third-Largest Homeless Rate in the Country

Still, that should be of little comfort.  As the next chart shows, San Francisco’s homeless rate is the third-worst in the country.  It ranks only behind Washington DC and Boston.  New York is in fourth place. 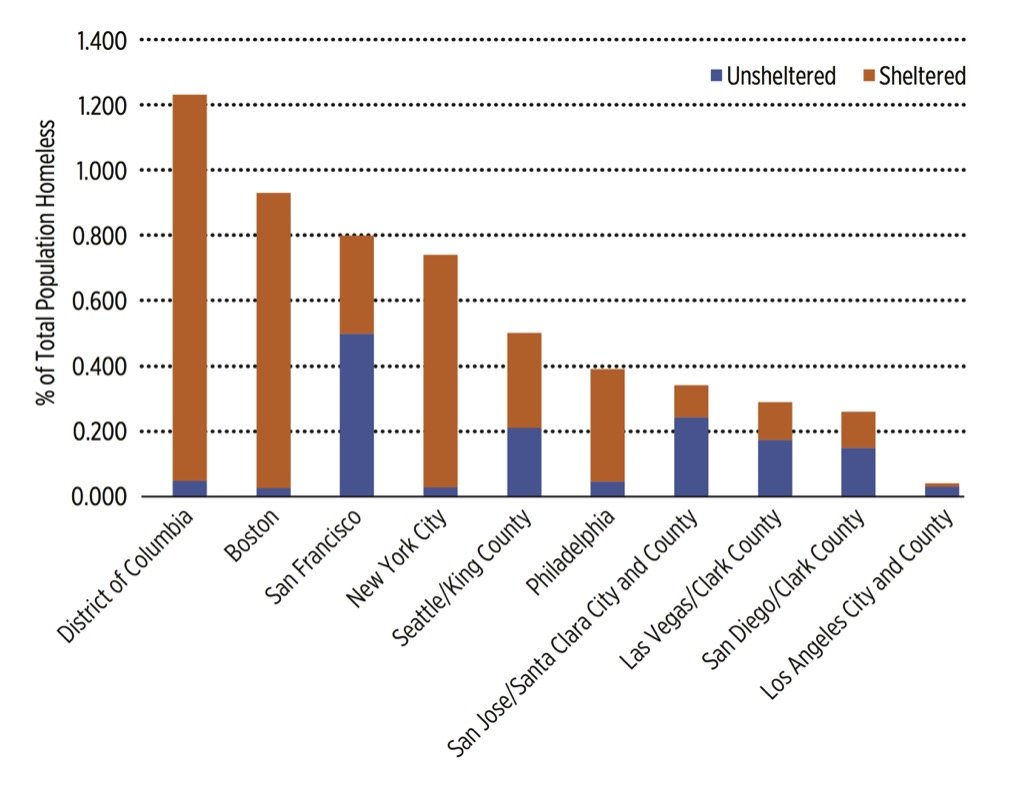 As the SPUR article puts it, this chart is “the smoking gun.” It reveals that nearly 60% of SF’s homeless population is “unsheltered”  — far in excess of any other city or county covered on the chart.  That’s well over 4,000 people living “in a place that is not designed as a sleeping accommodation for human beings.”

Why the disparity between East and West Coast cities?  The article suggests that East Coast cities have adopted strategies that emphasize shelters as a low-cost, temporary solution. In some cases, like New York, the cities force people to go to shelters, as opposed to allowing them to choose to sleep in public spaces.  In fact, New York state law requires the city and state to provide shelter beds to all New Yorkers who are homeless by ‘reason of physical, mental, or social dysfunction.’

What have we done on this coast?  Here’s SPUR’s analysis: “By making ‘real housing’ with wraparound social services the only acceptable solution, without having enough money to actually scale up that solution, Bay Area cities, especially San Francisco, have created the conditions in which thousands of people are living on the streets.”  I’d add that we would not tolerate this condition if we were stepping over corpses:  it’s the relatively mild weather that allows us to take an “all or nothing” approach.

Who are the Homeless?

While alcohol and drug use is certainly a significant cause of homelessness, it is by no means the predominant one.  In San Francisco especially, a lost job, an eviction, or even an argument with a friend or family member can leave you living on the street.  Nearly half are under age 24 when they first experience homelessness. 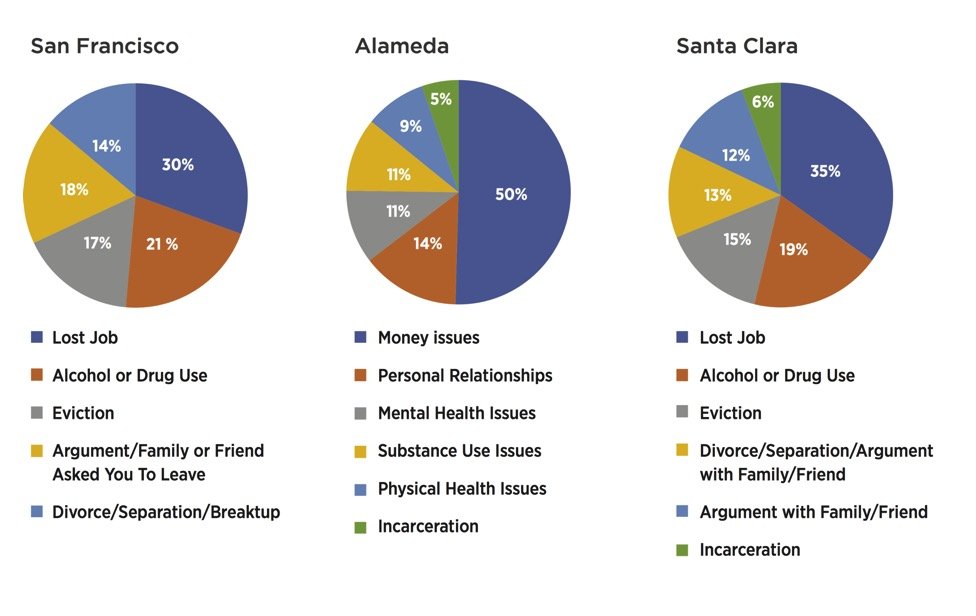 The majority of our homeless are from the region, not from other parts of the country.  While, like other cities, San Francisco may act as a “magnet” for the homeless, 69% of San Francisco’s homeless became so in this county, and 55% have lived here for more than 10 years.

The SPUR article concludes that “Permanent supportive housing using a “housing first” approach (offering housing without any preconditions like addressing substance abuse or unemployment) produces the best outcomes.” At the same time, it is “too expensive…to be the only solution.”  Other suggested measures seem self-evident:  offer more emergency shelters and try to prevent homelessness before it starts. Since the author points out that taking a “real housing or no housing”  approach has contributed mightily to the number of homeless living without any form shelter, presumably, we should be concentrating on emergency shelters.  At least, that’s my conclusion.

The most comprehensive list of organizations dedicated to homelessness that I’ve been able to find is at The Homeless Shelter Directory. This is a national database of resources and services dedicated to the homeless.  Those in San Francisco and other Bay Area counties are listed here.

Surprisingly, it’s been difficult to find a list of resources focused on San Francisco alone.  SF Homeless Project maintains a list but it’s not very user-friendly.  What’s more, it appears that the site has not been updated for almost a year.

San Francisco’s Department of Homelessness and Supportive Housing is the city’s administrative response to the problem.  The site mostly provides links to specific programs run by the city, but there are also links to news and research. In fact you can find some of the annual homeless counts for San Francisco that SPUR likely used in its research here.

At Paragon, our Community Fund regularly donates to local causes including shelters.In past years, my family and I have volunteered to prepare food and clothing bags at Glide Memorial Church through programs sponsored by Temple EmanuEl, and we will do so again this year. But I plan to do more. In a city as rich as San Francisco, surely we can do a better job taking care of the less fortunate among us.

One Reply to “Homeless in the Bay Area”