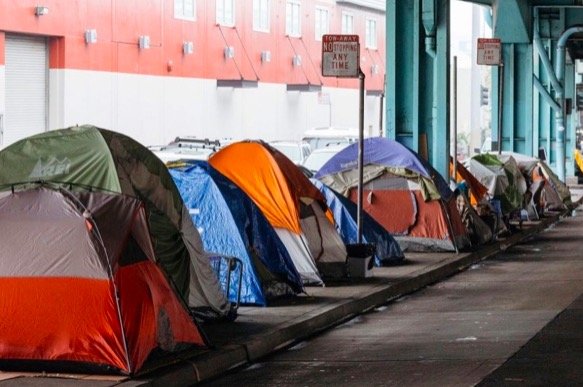 After a disconcertingly long and warm Autumn, the weather has finally turned cold and wet.  While we were warm and dry, enjoying the inevitable surfeit of organic heirloom turkey, or more “woke” foods, the Bay Area’s homeless were merely trying to survive.

Two Thanksgivings ago, when I last published a newsletter on this subject, the estimated homeless population in San Francisco was 6,858 based on the “point in time” (PIT) count that San Francisco and other cities are required by the federal Housing and Urban Development Agency (HUD) to conduct biennially.  For 2019, the count is 8,011 – an increase of 17%.  (The charts below is taken from the City’s executive summary). 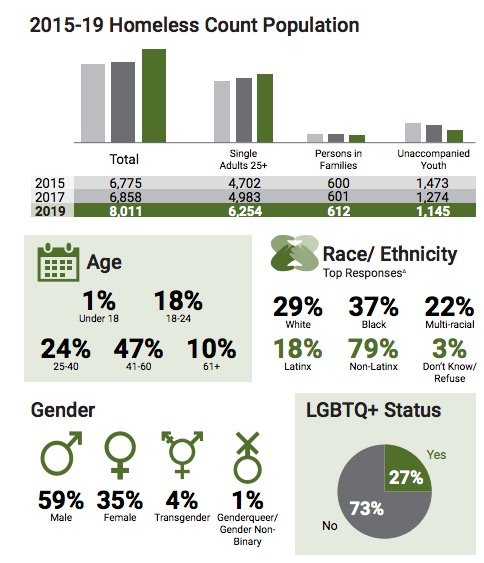 But the fact is that “counting” the homeless is by its nature imprecise.  The actual number could be double the PIT count.  According to a recent New York Times article, 17,595 homeless people were treated by the City’s Department of Health and Human Services (HSH) this year.  That represents a 30% increase over 2018.

64% of the Homeless are Unsheltered

Digging into the numbers reveals more misery.  Under the PIT report, fully 64% of the homeless are “unsheltered,” meaning they are living on the streets.  That number hasn’t budged since 2015.  (It was about 61% in 2013).

As you drive past the tent encampments below the Central Freeway, it’s easy to assume that the majority of homeless are young, male, and either drug addicted or mentally ill.  Indeed, as the chart above confirms 59% are male, and many do suffer from alcohol and drug use and psychiatric and emotional conditions once they’re on the streets (see chart below).

However, the primary cause for people becoming homeless in the first place is not drug and alcohol abuse but loss of a job.  Drug and alcohol use are a distant second.  Twenty-five percent cite eviction or an argument with a friend or family member as the primary reason for their being homeless. 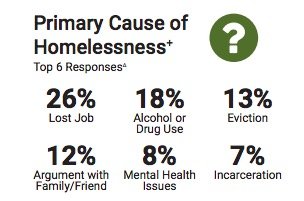 Nor is homelessness primarily a scourge of the young, who, many seem to think, if not to say, can simply “go and get a job.” I recently attended a presentation by Dr. Joshua Bamberger, a physician and professor at UCSF and an expert in homelessness.  He cites studies that show that the homeless population is aging both in San Francisco and nationwide.  Today, 50% of San Francisco’s homeless population of single adults is aged 50 or more.  In 1990, only 11% were.  And 44% of the homeless suffered their first episode of homelessness for the first time after age 50. 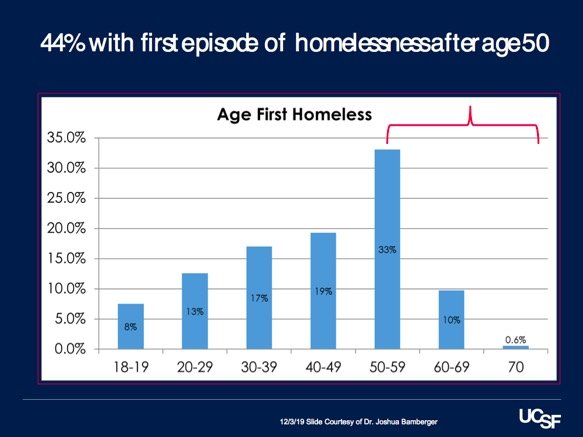 When you consider that nearly 40% of the homeless cite loss of a job or an eviction as the primary cause of their homelessness, it’s perhaps less surprising that so many are over 50.  It’s tougher to get a job when you’re older and if you’re evicted from a place you’ve been living in for a long time, you’re less likely to be able to afford a market rental rate in a place like San Francisco.

What’s more, many of the homeless started off life at a disadvantage. 28% of homeless youths under 25 had experienced foster care. 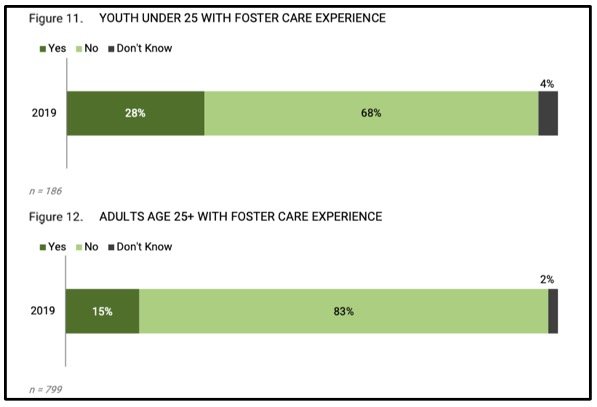 Taken together, these statistics give the lie to the idea that homelessness is a matter of choice; that the homeless are loafers taking advantage of the system.  Rather, they suggest that homelessness is usually the end result of a rough start in life, a sudden job loss or eviction, addiction, or a constellation of all of these.

Another misconception is that San Francisco is a “magnet” for the homeless.  70% of the homeless were living in San Francisco at the time they became homeless.  According to the Bay Area Economic Council’s comprehensive Report on Homelessness, “the Bay Area’s homeless population is mostly comprised of long-time residents: 56 percent have lived in their county for 10 or more years, and the vast majority (89 percent) have lived in their current county for more than one year.”  The report’s conclusion is striking:   “Given this information, the region’s crisis is one of its own making, and not a product of the migration of homeless individuals from other states or regions.” 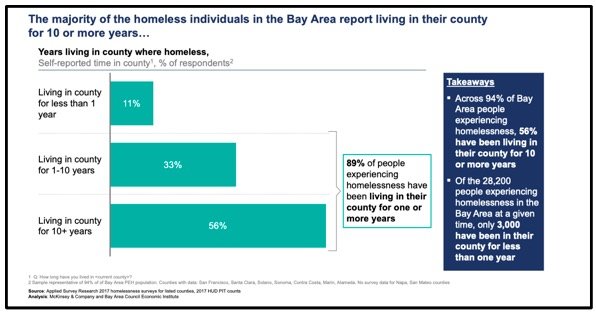 Other takeaways from the Report:

“The Bay Area’s chronic housing shortage especially at extremely low-income levels, limited growth in wages at the bottom of the income spectrum, an insufﬁcient inventory of short-term shelters and permanent supportive housing, and too few resources for mental health and addiction services, each played a role in leading up to the current crisis.”

As to proposed solutions, that would require at least another newsletter to discuss.  In the meantime, I highly recommend reading the Bay Area Economic Council’s Report.

As someone who works in and profits from an industry that serves people who can afford to buy homes in a city where the average price of a home is around $1.6 million, I feel it’s my responsibility to “give back” where I can.  Volunteering to make dinners at Geary House, a transitional housing facility, run by Larkin Youth Services, is one way I’ve been able to get directly involved; I’m also looking for opportunities to get involved in the governance of non-profits serving the homeless.  My hope is that my occasional  newsletters on this topic will, in some small way, help keep my friends, clients, and readers from becoming inured to the real human suffering that we see each day on our streets.

My thanks to Joshua Bamberger, MD, MPH, Professor, Family and Community Medicine, UCSF

Associate Director, UCSF Benioff Homelessness and Housing Initiative, for use of UCSF slide and information on the aging of the homeless population.