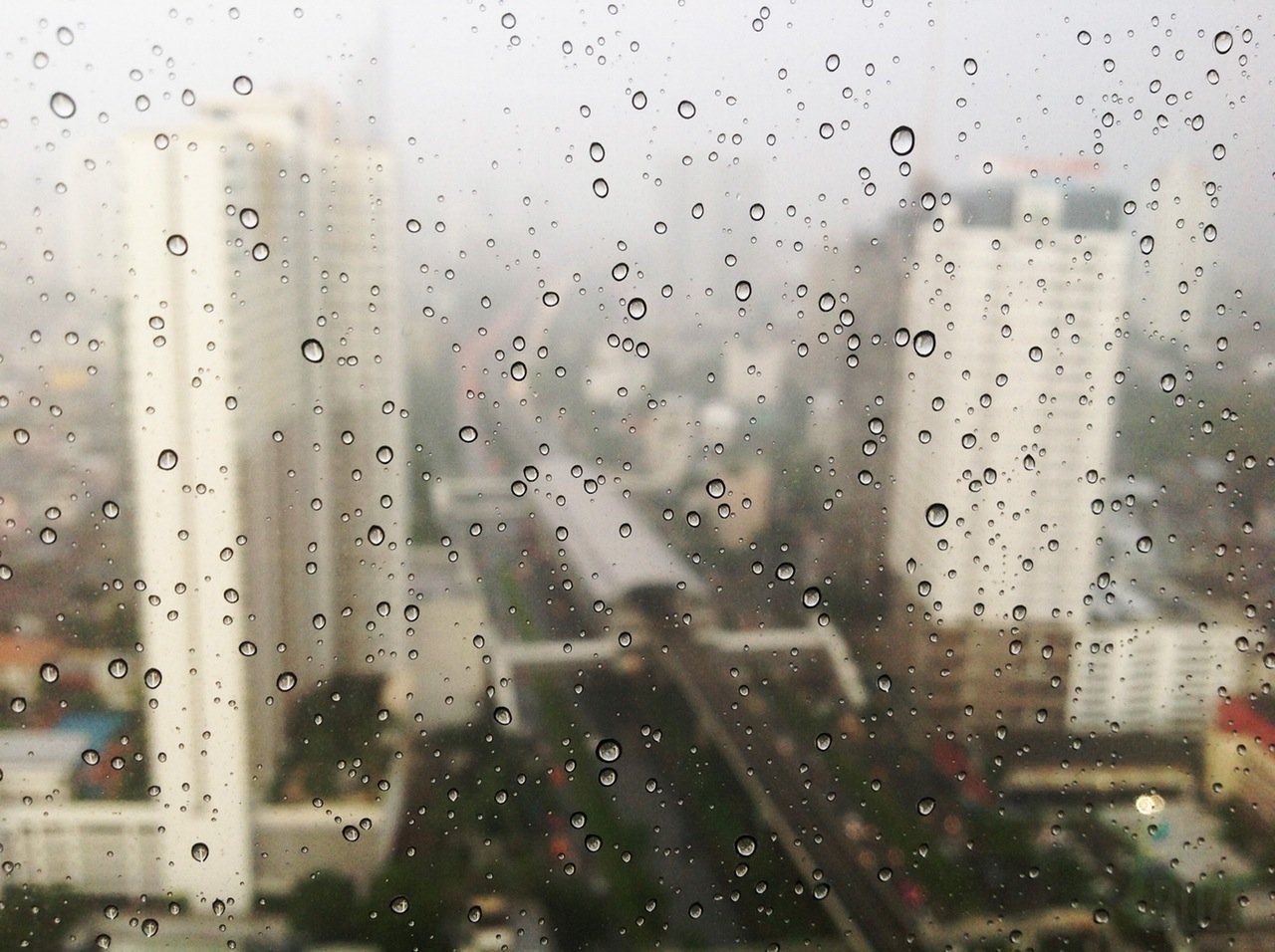 It happens every year. People decide that holiday parties, visiting with family, and staying dry are more important than visiting open houses on the week-end. Activity drops and often so do prices. But with the first glimmers of sunshine and longer days, buyers and sellers get back into the market and the home buying/selling season takes off.

And that seems to be exactly what’s happening this year, despite the lingering effects of El Niño and a bumpy stock market ride. Take a look at the chart below: 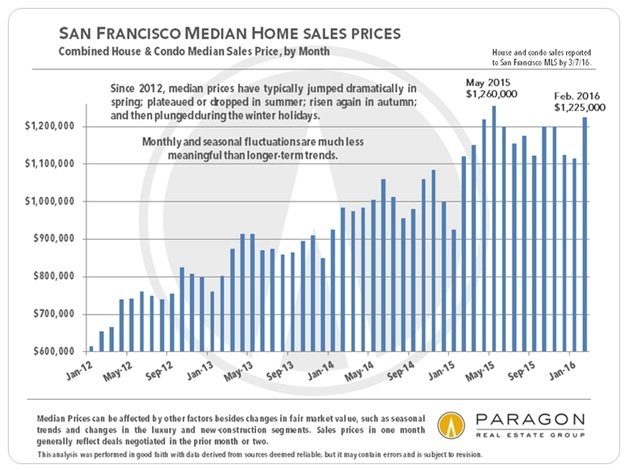 Note that the median price in February was the highest since it peaked in May of 2015.  As our market analyst guru, Patrick Carlisle, notes: “If this spring is like the past 4 springs in which a very-high-demand/ very-low-supply dynamic prevailed, then sustained home-price appreciation may start showing up in the statistics during the next few months.”

It may be too early to tell, but my personal experience suggests that there is a lot of pent up demand, at least for entry level and mid-range homes.  (The luxury end may be softer.)  I try to avoid war stories in these newsletters, but this one is instructive.  In early February, my client bid on a pleasant 1300 sf home listed at $899,000 in Sunnyside – once considered an affordable working class neighborhood and now benefiting big-time from its proximity to Glen Park.  The agent received 12 offers and the property sold for $1.43 million all-cash.  A couple of weeks later, we were the winning bidder on another property in the area that was listed at $899,000 and received a dozen offers. Sale price? $1.3 million, all-cash.  Of course, not every property receives this kind of attention, but a lot of buyers seem to be eager to get into something — anything — before even more people join the fray as Spring arrives.

Head West and South for Value

Recent week-end visits to open homes listed at under $1 million in neighborhoods like Parkside, and Central and Outer Sunset have been jammed with people.  A typical mid-century home with 2 or 3 bedrooms (one of which may be an “in-law” in the basement) is selling for $1.2 million and more.  I will take some credit for having predicted that these previously overlooked neighborhoods would benefit by stratospheric prices in other more central neighborhoods.

Below are charts showing where you are most likely to find a home or condo in the “more affordable” range based on the number of sales occurring in those areas. 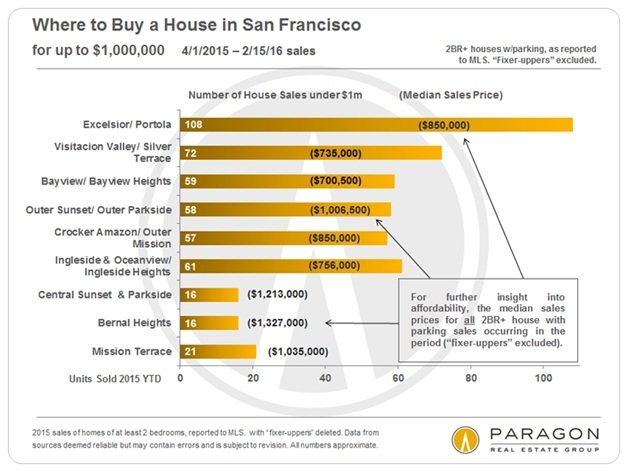 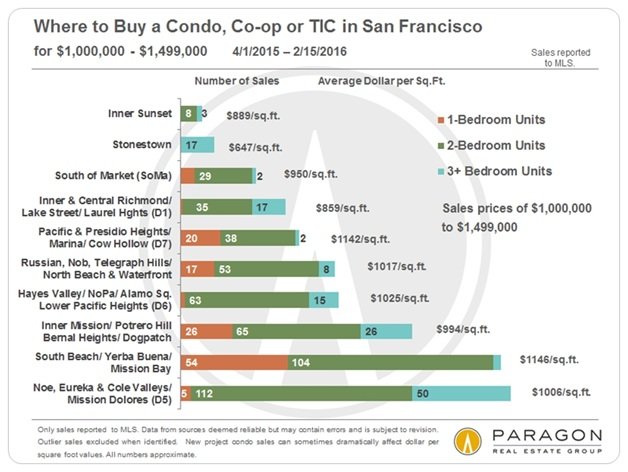 As for the higher end of the market, which we’ll define as properties selling for above $2 million, it is even more dramatically affected by seasonality. As seen in the chart below, activity for more expensive homes typically soars in spring, drops during the summer holidays, rebounds briefly in autumn, and then plunges deeply in mid-winter. 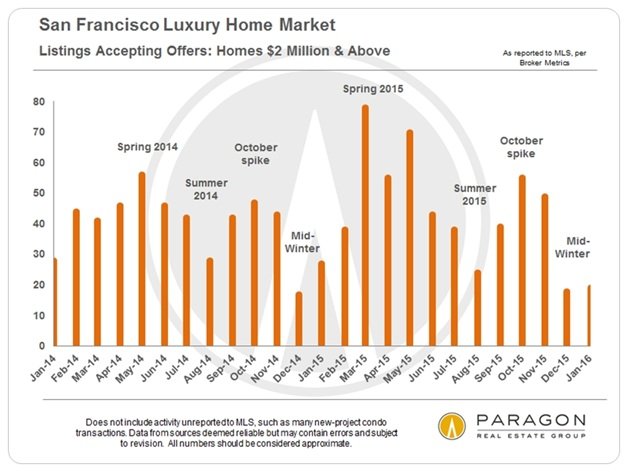 This ebb and flow of high-end sales is one of the factors behind short-term, seasonal ups and downs in median sales price. So far in 2016, luxury home closings have been comparable to early 2015, but we are just entering the main selling season now.  It’s really too early to tell whether prices at this end of the market will – can – continue to go up.

As always, your questions, comments, suggestions, and referrals are much appreciated!