At the end of last month, the media was full of Case-Shiller’s upbeat report on the national housing market for July 2009, its most recent reporting month. Three months of improving sales “continue to support an indication of stabilization in national real estate values,” according to the September Report.

Here’s the chart, by the way, which also shows that on a national basis we are back to Autumn 2003 price levels. 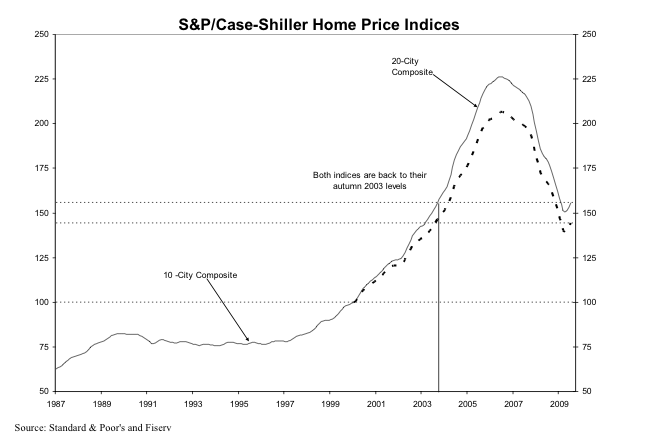 See that little up-tick at the very end of down side of the mountain?  That’s what every one is celebrating, folks.  Indeed, it’s hard not to laugh when the Report includes tortured phrases like “the rate of annual decline … seems to be decelerating”  or “all metro areas are showing an improvement in the annual rates of return, as seen through a moderation in their annual declines.” Whoopee!

This is now old news.  But in this Sunday’s New York Times, Mr. Shiller mused about what all this meant for the real estate market. The article is not a model of clarity, but Shiller’s conclusion is pretty stark:  “At the moment, it appears that the extreme ups and downs of the housing market have turned many Americans into housing speculators.”  He suggests that people are looking at the huge amount of money the fed is pumping into the system, the first-time home-buyer tax credits, and other short-term infusions, and basically “trying  to time their home-buying decisions” and thus artificially causing the spike in prices. Here’s the takeaway:   “The sudden turn could signal a new housing boom, but it is more likely just a sign of a period of higher short-run price volatility.”

Indeed, after noting that the recent change in direction in the CS Index is the sharpest he’s ever seen, he takes a look at the last time a similar turnaround occurred.  It was at the end of the last housing bust, after the 1990-91 recession.  Five years later, however, home prices were down 13.8% in inflation-adjusted terms from the highs they’d reached in the “turnaround” month.

Meanwhile, the stock market continues its giddy gains — perhaps for many of the same reasons as the housing market has bounced back.

Personally, I’m not terribly fond of cats, but if I owned one I’d be keeping it away from any open windows.